The night-time economy is increasingly being seen as revitalisers of a city’s economic and tourism growth. This has led to the setting up of ‘night czars’ – or city planning councils to promote nightlife in urban centers, together making a strong case for extending a building’s iconic city after dark. And while it serves no other functional purposes, façade lighting does serve as an extremely useful marketing tool that seeks to engage with the public even after the facility is closed.

Just as cardinal orientation (of glazing) is crucial to the designing of lighting in interior spaces and how much to limit or intensify the amount of artificial lighting, the orientation of building to views and angles of view is crucial to the design of the façade lighting. It not only dictates how to maximize on and address prominent views – which elements to emphasize and which to neglect, but how a luminaire must be positioned to avoid glare and light trespass, how a detail must be integrated to avoid seeing the light source yet see the effect of light.

In the following section, we describe the façade lighting – design, process and outcome for two very distinct projects, but are unified in their approach towards lighting. For Intersekt and for the Neelkanth Sarovar Premiere – with two radically different façade designs, in two places thousands of kilometers apart from each other, in two very different cultural and urban contexts, they stand testimony to our belief that the language of light knows no boundaries!

Two identical buildings existed on the site that served as a warehouse for the brand’s vast collection of tiles. The new development was to create an experience center on two floors with the corporate headquarters on top. Keeping the original structure intact, the architect visualized a metamorphosis of the façade to depict the weathering of rocks.

The result is a dynamic sculptural formation with jagged edges and acute angles. To achieve this a second structural framework was built, with its own separate foundation and clad with large format tiles and secured to the original structure.

As lighting designers on the project, we came on board, when the interior was already completed, lights installed and ready to be opened when the client decided that something was not quite right! The lighting conceptualization, wiring for the automation, procurement of fixtures for 30,000 sq ft of retail space was re-initiated and redone. At the same time, the façade execution was in progress.

The night time rendering of the façade was modified and the lighting intent adapted to better underline the façade concept. In place of two continuous illuminated bands in the façade, discreet warm lighting was introduced in each protrusion seeking to emphasize the jaggedness of the façade.

The detail was tweaked to accommodate a warm 2200K homogeneous, encapsulated LED profile for a soft accent contrasting against the sharp material form. The corner of the building is highlighted using screened projectors with precise beams to avoid glare to users or passerby’s while the louvered crown is underscored using linear grazers.

The Night Time Image of the Building

If one were to reflect back on what was most memorable about the project, it would have to be the great team of collaborators, designers, project managers, but also the strong client emphasis on the nighttime image of the building from the start. Sitting in the rapidly developing capital city of Lusaka, across continents from Design Matrix core office at New Delhi, the project’s lighting was conceived, developed, executed and commissioned over just 3 visits to site but with innumerable emails, web calls, video meetings, drawings and documents. The façade lighting intent however, remained practically unchanged from day one.

It sought to simply integrate with the architecture and highlight elements, relief, surfaces and material. The entire scheme was almost completely realised by the use of a single luminaire type – the linear LED profile. These were used to glow the edges of vertical bands at the base; placed with intervals of half a metre to emphasize horizontal bands on a dead wall façade; uplight a 100 mm x 100 niche on the guestroom windows façade and so on. The controls for these profiles were also intelligently combined and drivers located together at a few easily accessible, strategic locations.

The versatility of a single light source relies heavily on the creativity of the designer and how he can imagine applying the same fixture in multiple situations, applications and ways. A typical façade lighting project involves the use of a minimum of 3-4 types of luminaires and these may be bought out from different vendors / manufacturers to optimise the cost-value proposition or simply the unavailability of all types of suitable equipment with one manufacturer.

By limiting the use to one major type of luminaire, there was better control on the CCT (Corelated Colour Temperature) and 3000K everywhere on the façade seems the same. It helped avoid a potential problem that the same colour temperature tends to vary between different manufacturers and even between different luminaire types of the same manufacturer simply because different brand LED chips are applied. The result is a better ‘put-together’ façade lighting which may not have been achievable even by investing more in good quality equipment if they came from different brands.

Besides the above, a single element, in the brand’s signature blue, appears in the façade in the form of a blue wash on a vertical band of the façade – everything else is in a warm 3000K. Blue is also a great choice for façade lighting simply because it seems to disappear and blend into the night sky ubiquitously.

Together tones of white and blue have proven time and again to be successful combinations for façade lighting and once again, the Neelkanth Sarovar Premiere stands in testimony to this winning theory. 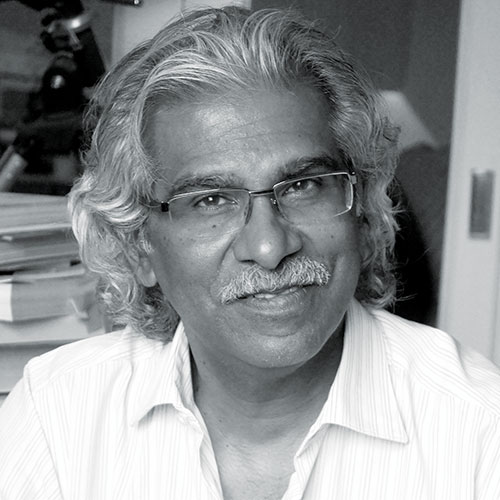 Sanjeev Nangia seeded the country’s first specialist lighting integration company before co-founding Design Matrix in 2005. His vast industry experience guides the firm’s work amalgamating it with worldwide best practices, codal guidelines and developments in lighting and related services. He leads the firm’s quality assurance process, and under his mentorship Design Matrix is certified under the international standard for quality management systems ISO 9001:2015. He also steers the company’s CSR initiatives – and is actively involved in the lighting of the Mahabodhi temple at Gaya, Bihar as a service and offering. Sanjeev Nangia is a chartered engineer and a member of the Illuminating Engineering Society of North America, as well as member of Rotary Club of Delhi, Garden City.