Born and brought up in an architectural household, Ar. Sumit Dhawan had a prolonged affinity for architecture since childhood. His architect father Satish Dhawan worked with CPWD and had great exposure to the international market. Starting with Architecture in the year 2000, Ar. Sumit did his internship in Auroville, Pondicherry where he learned the fundamentals from numerous local and international architects like Dominic Dube, Anupama Kundoo, Piero and Gloria Cicionesi, Satprem Maini, etc. Later he worked with the architecture firm Tevatia Chauhan & Sharma Architects known as Design Forum International today. After completing B.Arch, taking a cue from multiple international architects like Norman Foster, Zaha Hadid, Santiago Calatrava, Le Corbusier, etc., Sumit started his practice ‘Cityspace’82 Architects’ in the year 2005. Soo K. Chan, Principal-SCDA Architects has been a major influence on his work as he believes that his thought process resonates with the renowned designer, giving him immense confidence in his work. Sumit has done projects for politicians, bureaucrats, lawyers, the residence of famous cricketers Yuvraj Singh and Gautam Gambhir, and many more. Also, his work is appreciated by developers whom he has collaborated with including DLF, Ansal Group, Orchid, MGF to name a few 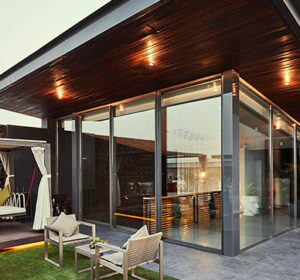 Façades determine visual identity, character and expression of architecture. The design and...