Façades are the exterior layer of an edifice that creates the first impression and connect its external and internal environment. Therefore, the appropriate lighting of the façade can enhance its beauty and relevance. Façade lighting can strike up an engaging dialogue in the urban world. It lends the building a voice to communicate with its viewers and a personality that creates a visual experience. Some display images, while others highlight architectural accents, and some stand as a landmark with their abstract display in the city’s night skyline.

Façade lighting has turned structures into bold personalities that are no longer lost in oblivion after dark. With façade lighting, building owners can choose to highlight entrances, pillars and specific architectural features. The interplay of light and shadow is used intelligently to prevent a monotone appearance of the external surface of a building.

Façade Lighting Highlights the Subtle Features of a Building

Preserving a building’s integrity and functionality is essential though. Hence, it is imperative that the façade lighting solution is designed to fit into the overall design aesthetic, rather than dictating the existing architectural form.

Digital technology is rapidly increasing the dynamic interaction between building, its users and the surrounding environment. Developments in the lighting technology are empowering architects and designers to create dynamic designs integrating lighting and media displays on façades.

Media facade lighting is layers of individually controllable lights attached or woven into the building façade that turns into a gigantic screen displaying text, graphics and animations. Seamless integration of these layers on existing structures pose challenges for architects and designers. Aspects such as materials and texture of the external surface, sizes, elevation, spatial relationships of various surfaces impact the design of such media layers.

With brands creating new and innovative ways to connect with their audience, displaying images or videos on building façades has become an eye-catching medium. Media facade lighting offers numerous possibilities to communicate with viewers and reinforce the emotional connect with a brand. Due to their size, colour and appeal, media facade installations stand out as individuals in the urban night-space. Creative media displays are driven by narrative content and complementing imagery.

Advance media facade solutions offer complete integration of dynamic media applications into sleek architectural panels on the exterior of a building. This provides innovative modes for displays on varied surfaces that don’t stand out as conventional bulky equipment’s.

This rather highlights the subtle features of a building. Another technological development offers an architectural mesh that clads the external surface of a building like an outer skin and doubles up as a large-scale media display screen.

Simultaneously, it remains transparent from the inside without blocking the view of its occupants. When the media screens are not in use, the LED profiles appear nearly invisible against the transparent mesh façade. While the hybrid media display screen is another innovative lighting solution that allows projecting depths and textures through multi-layered applications.

It provides a layer for simple media displays directly on the façade, and another layer that creates wall washing or radiance on the façade. With intelligent control systems,  media facades can be divided into multiple sections that can be controlled separately to display distinct content or can be seamlessly integrated together to form a giant screen.

Innovations in media facades lighting are letting green buildings indulge in luminous storytelling. For instance, developing media facades with photovoltaic modules gain energy by absorbing sunlight during the day and convert it into an artistic lighting display after sundown. This version could be further enhanced by placing the solar cells on the roof for efficient sun orientation and energy absorption.

Paying attention to the content that is to be displayed on these media facades is equally important as the engineering that goes behind creating them. It’s wise to consider the objectives, such as the following asks – What’s the purpose for creating media facades, is it to enhance the building’s presence or to narrate a story? If it’s a story, how should it be narrated so as to make the desired impact? How should the audience engage with your media facades?

Media facade installations also involve huge costs of running and maintenance. Brand and building owners are opting for a few minutes of the display every hour instead of all night. Besides reducing operational costs, this also alleviates concerns relating to light pollution and any possible traffic distraction.

Artificial Intelligence enabled technology is already prevalent in other spaces such as commercial and entertainment across platforms that engage and connect with people on a multi-sensory level. In lighting, the interactive LED technology has been mostly realized through music-to-light mapping – driving light fixtures based on musical input, and motion sensor technology – operating light fixtures based on movement detection. Besides these, there is a great potential for other interactive data inputs such as voice recognition and data streams (from live inputs such as weather patterns).

Dynamic LED lighting provides not only colour-changing as well as colour temperature- changing products. While the interactive lighting control gives the ability to analyse and map data input in real-time. Each of the light points can be precisely controlled with multiple power states which correspond both to power consumption and light intensity.

Though it requires further research, an intelligent, autonomous lighting control system can offer several benefits such as –

1. Commercial establishments can employ a more interactive and human-centric approach to their façade lighting design based on real-time data input and attract potential customers.

4. Lighting designers will be able to scale projects at a lower cost, save programming time and enhance audience interactivity.

Designers are not only making innovative structures but also using materials that are sustainable and environmentally-friendly. An efficient façade lighting solution meets functional and artistic requirements while saving resources and preventing negative impact on the environment. Sustainable façade lighting aims at minimizing light emission in order to maintain a dark sky without light pollution that disturbs the biological patterns of nocturnal species.

Directing light in a focused fashion helps in reducing stray light emissions. Light management and control systems facilitate control on intensity and duration, as well as provide maximum effect with lesser energy consumption. The façade of a building is an important feature that sets its aesthetic tone and ambiance. It’s vital to consider the right façade lighting solutions that enhance its beauty and symbolic value. 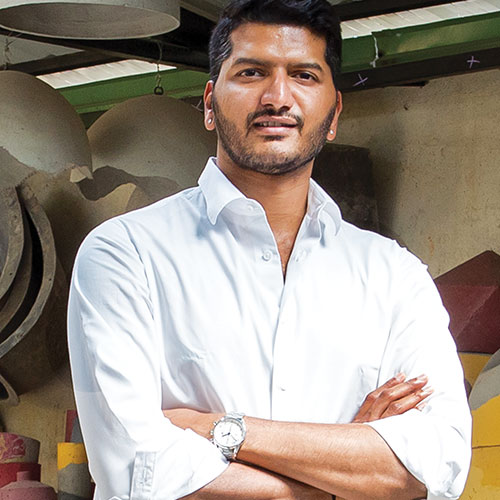 Radeesh Shetty, along with his friend Gaurav Rai, founded the premier store for lighting, home decor and accessories - The Purple Turtles – in2009 at Bangalore. Over the years, The Purple Turtles has worked with big corporates like TCS, Wipro, Google, Facebook, LinkedIn, Microsoft, and Informatics. In the last 10 years, they have opened six stores across Bangalore, Calicut, Mumbai and Chennai. The team has worked on 10000+ projects across the globe and have served 300000+ customers. The jump from an experience centre to a storefront and retail space was followed by a foray into the surging e-commerce arena. The product line evolved alongside, to encompass other curated, locally-sourced home décor products of the highest quality. The Purple Turtles will soon extend their product and services range to a garden/outdoor centric brand called Beruru and wall installations with Tilisme, and plans to have an interior designing service to help people choose home decor and lighting.