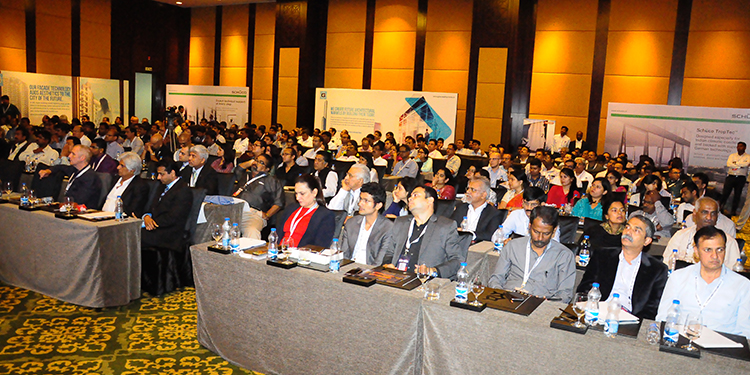 Coming full circle to where it started from, Zak World of Façades returned to Bangalore in its third season with an all new emphasis on the façades for high-rise cluster housing owing to a spurt in the residential demands of the cosmopolitan. The one day conference held at Ritz Carlton Hotel, Bangalore on 19th June saw participation of stalwarts from the construction industry fraternity in India and abroad, sharing their experience to achieve best façade execution practices. After their highly encouraging and successful first & second season around India, the third season of Zak World of Façades started with Mumbai in April 2015 and Bangalore was second in a line of series of events planned. The event was intimate, with a little under 300 attendees who heard a dozen leaders from the industry at the grand conference hall of Ritz Carlton.

The theme of the conference organized at Bangalore was ‘Cultivating the Citified Façades’. The endeavour was to unite the ever expanding brigade of experts in the field of façades and building envelopes, to discuss the novice and improvise the old and thereby enabling an adept and empowered façade industry. The conference expedited as a platform for networking, necessary in the professional world. Every section of this program was well planned to give an insight on advanced facade execution and the support structure available to lift the industry to be in par with world standards. Expert panels comprised of well experienced professionals from various construction discipline who analyzed and debated on the present and future scenario of façade industry with an open approach to strengthen the industry.

Tariq Kachwala, Director, FG Glass Industries hosted and convened the event. After the welcome address, the first session started with a discussion on “Rainscreen Metal Cladding systems using Titanium Zinc” by Girish Dharachar, Managing Director, Umicore India. He discussed the material properties of Titanium zinc and Cladding Systems with Titanium Zinc. He explained the use of Zinc as a cladding material through two wonderful projects – Ar. Terry Farrell’s Kennedy Town Swimming Pool at Hong Kong and Ar. Massimiliano Fuksas’ Auditorium project at France. In both the projects, Zinc cladding was chosen for its ability to self-heal damage to its surface through oxidization, for its weathered look and for its low sheen & matt finish which also reduce reflections affecting neighbouring residential buildings and the effect of sunlight on the curved surfaces. Its malleability and workability suited the building’s fluid and curvilinear form and allowed details to be modified during construction. The two Indian project case studies showcased were – a commercial building for Dalmia Group at Surat and another one for Marvel Realtors -Marvel Edge, Pune.

Session 2 started with the discussion on the subject “Vitality of Rear Ventilated Facades” by Dr. Prashanth Reddy, MD & CEO of FunderMax India. This was followed by a presentation by the renowned architect Andy Fisher, Managing Director, AF Workshop. He spoke about ‘Design for Residential High-rises’ and discussed the bare minimum design responsibilities for high-rise living. He also demonstrated how urban recreation is possible in high-rise buildings through proper planning and design. Andy Fisher explained the need for global standardisation and how it could be applied to high rise living for better quality of life in India. .He also demonstrated the way to generate free space in urban areas through better designs of high-rise projects which would provide for recreation.

Ayca Ozcanlar, Senior Façade Consultant from Arup presented a paper on “Sustainable Facades in Tall Buildings”. She discussed the case studies of South Beach, Tanjong Pagar, Marina One and Capita Green Office Tower projects In Singapore. She explained the performance of façade, and its design process in detail for the projects and discussed how they can be employed onto high-rise projects in Bangalore. About 60 percent of CO2 emissions are from buildings. She explained various technologies like photovoltaic panels can reduce the energy consumption in tall buildings. She also elaborated on how to decide on the shading coefficient of glass at different regions and spoke on green facades with sky terraces, façade configuration considering heat gain from sun and climatic conditions.

Antony John, Engineering Director, Scheuco India, presented a case study of the facade of One BKC , Mumbai, which is an iconic building with best in façade technology. Through this case study, he demonstrated new innovations in system facade solutions. He also spoke about few latest product Innovations unveiled at BAU Munich 2015.

Ar.Khan spoke on how to decide on elevation of facades which also determines the interior comfort levels. Other points discussed by the panel were: constrains faced by architects and contractors while deciding on the facades which include the budget limitation and cost of quality materials, the effect of variations in the sales value of the project in the market and high dependency on the market sale price, limited number of high quality vendors and fabricators, technical limitations of the façade contractors, etc. The panel also discussed the challenges faced by the façade industry like limitations in experimenting and trying out new materials, and the need for bringing in the expertise of façade consultants in projects, which might help choose the best materials and technology in the most efficient way. Harmeet Singh of Global Façade insisted on the need for model tests before constructing high-rises and also on the importance of doing the wind tunnel test for high rise buildings in his speech.

Session 3 started with a talk on Diagrid systems by Harish Gupta of Glass Wall system. He presented the case study of Hotel JW Marriott, Kolkata in which the system is employed. This was followed by a lecture on designing facades with Structural Laminated Glass Inter-layers by Philip Davies, consultant at Davies Laminated Glass consulting spoke about the use of ionoplast inter-layers in facades.Tanuj Sharma, Manager, Railing & Facade, Kinlong elaborated on the selection process of Point Fixed Hardware.

Session 4 commenced with a lecture on Safety for Facades, and issues on Fire Safety and life Safety was discussed by K.R. Suresh, Regional Director, Axis Facade. This was followed by a talk on ‘Latest Hardware Solutions for Windows and Facades’ by Graziano D’Emilio, Commercial Director, Lavale Internationale. D’Emillio discussed the importance of quality manufacturers and need for expertise and experience for professionals in the field. This was followed by an interesting group discussion on “Understanding Facade Process Management” which saw the participation of experts like Nitin Bhatia, Managing Director, FACET; Ar.Tom Thomas, Principal Architect, Thomas Associate; Manjunath Prasad, COO, Brigade Enterprises; Harakumar GK, VP- Engineering, Tata Housing; P.V. Varghese, CEO &Director, Sobha Glazing & Metal Works; and Shyam Damodaran, Head-Corporate Strategy, Mfar Holdings. Nitin Bhatia was the moderator. The group discussed various important aspects of Facade Process management including the need for FPM, Possible pitfalls and their avoidance, integration of various players and their roles, etc. The event ended with a very lively question and answer session followed by networking dinner. 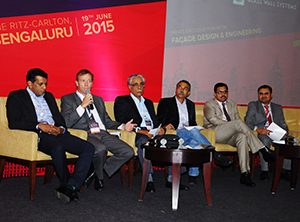 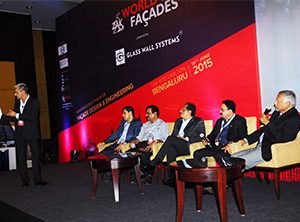