Event Location : Zak World of Façades held on the 14th of June at Taj Coromandel in Chennai

The 5th Zak World Of Facades completes successfully in Chennai with a turnout of 320 delegates. The key highlight was the launch of the Indian Façade & Fenestration Association (IFFA) and Qualindal.

The building façade plays a vital role in bringing the architect’s vision to life. It makes a major contribution to the sustainability of a building, influencing both energy efficiency and the quality of the internal climate. It is also an integral part of the building’s aesthetic, complementing the structural form and defining its visual impact on the urban environment. In India, we still miss the fundamentals of the façade, which is a complex subject for most of us.

The 5th edition of Zak World of Façades held on the 14th of June at Taj Coromandel in Chennai focused on the performance & functional aspects of a façade. While the previous edition in Mumbai focused on the issues of the industry, this edition tried to give solutions to those issues. One such solution proposed was the need for a self-regulatory body of the industry. The Indian Façade & Fenestration Association (IFFA) was launched to streamline the current working affairs of the industry.

You may also see: NCL Alltek & Seccolor Ltd in Chennai

About 320 representatives from architects, builders, façade consultants, contractors and other delegates from the façade & fenestration fraternity were present throughout the four-sectioned full day program. Each section was divided into different themes.

The first session on design & testing commenced by a presentation on “The art of deigning a façade” by Padmashri CN Raghavendran from CRN Associates. Presenting next was Simon Chin from Winwall Technology who stressed upon “The need for a façade performance test”. The session ended with an interactive group discussion moderated by Dev Chandwani from Innovators Façade Systems on “Best design practices for façades” which included panelists Ar Oscar Concessao from OCI Architects, Nitin Bhatia from Facet Construction Engineering, Ramesh Kumar from Noble Consolidated Glazings & Simon Chin from Winwall.

The second session on performance & functionality of façades which began with Ar Varun Kolhi from Merge Studios, New York presenting on “High performance façades” with a case study of the Karle Town SEZ building in Bangalore. KR Suresh from Axis Façades spoke next on “High performing materials for façades” which was followed by a presentation on “Quality installations using cast-in-anchor channels” by Suman Dhas from Halfen India. The session ended with a panel discussion on “The art of building a high performance façade” moderated by Selvam R from Geotrix. Key issues such as how to make the façade fireproof, soundproof, energy efficient & green were discussed. Apart from the above speakers, the other panelists included Sthaladipti Saha from Larsen & Toubro ECC, Afzal Contractor from GE Silicones, Pankaj Keswani from Alufit & Naren Kumar from Saint-Gobain Glass. 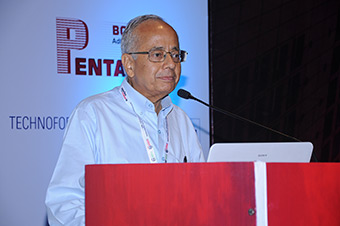 The third session on was on value additions for façades started with Anil Agarwal from Global Aluminium presenting on “High precision aluminium profiles” to be followed by Alex Dantziguian from Technoform speaking on “Thermal efficiency for façades through thermal break solutions”. Next to present was Graziano D’Mello from Lavaal on “European hardware for façades” to be followed by Satish Kumar from Elumatec on “Automation & optimization of façade production”

The final session started off with a breathtaking presentation by Ar Manit Rastogi on “Integrated façade design – façade as an environment filter” followed by the launch of QUALINDAL, which is the general licensee of QUALICOAT – The world’s leading quality label certification for aluminium surface finish. 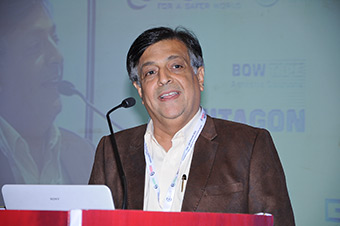 This panel discussion was an eye opener for the industry as it emphasized on the change that needs to be done in the industry right from the most powerful voices of India’s biggest infrastructure giants Larsen & Toubro and India’s biggest IT giants Tata Consultancy Services.

This edition of Zak World of Façades will be a an significant day to remember as many key deliberations on critical subjects that have never been examined before in public were confidently addressed by one and all to ensure that bloopers do not occur during the façade execution time.