Shaping a Smarter and Safer Tomorrow in Façade Design & Engineering 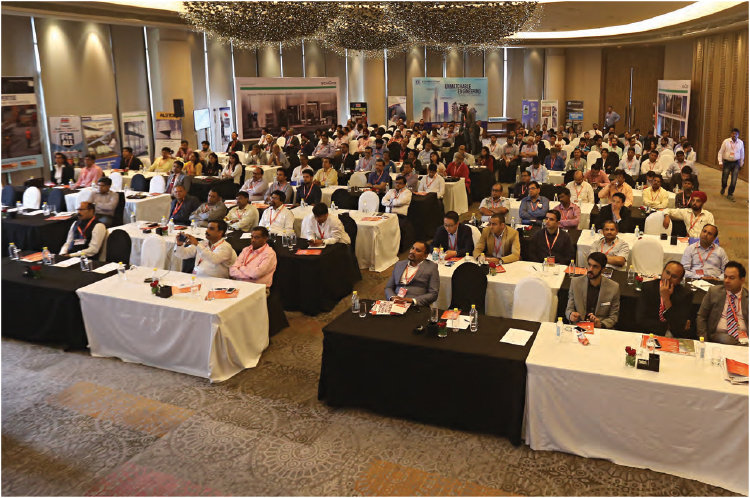 The 22nd edition of Zak World of Facades completes successfully in Delhi with a turnout of more than 400 delegates. The key focus of the event was “Shaping a Smarter and Safer Tomorrow in Façade Design & Engineering”.

The building envelope remains one of the most important exterior elements for building functionality. It is the component which defines the significance of a building and also plays many critical roles related to overall functioning and energy performance of a building. The Zak World of Facades is the largest conference series on facade design & engineering in the region and has become a specialized forum to discuss the latest innovations and challenges in the construction industry pertaining to the building envelope. 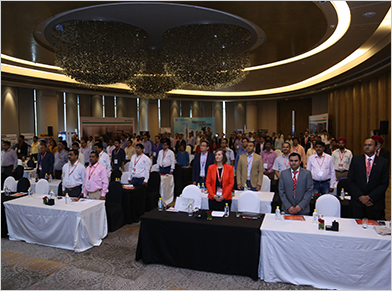 Now in its 22nd edition globally and 16th edition in India, the conference also showcased the latest technological solution-sin façade industry. The conference was well attended and the delegates included representatives from architects, builders, façade consultants, contractors and other members from the façade & fenestration fraternity. The conference was a four-session full day programme and each session revolved round different themes.

The first session started with Sourabh Kankar, Regional Manager – Architectural, Modiguard, presenting on “Principles of Glass Selection for Façades”. He explained how to build an efficient façade, choosing the right traits. He spoke about solar spectrum Vis-a -Vis performance and design, Sun-guard applications and tools and calculators for glass selection. Next to present was Dr. Prashanth Reddy, Managing Director & CEO, Funder Max who enlightened upon on use of High Pressure Laminates (HPL) as an effective façade material. He explained the benefits, aesthetics & functionality and various applications of HPL as cladding, louver, etc. The first session ended with an informative and remarkable presentation by Architects Britta and Amit Gupta, Partners, Studio Symbiosis on “Performative Aesthetics”. They presented their unique projects, including the Punjab Keasari Head Office design, explaining how the design of facades can optimize the performance of a built form integrating various elements of building as one design language.

After a light high tea, the audience readily gathered again to hear Praveen Chaubey, Project Manager, Priedemann, on ‘Façades for Future’. He spoke on new design trends, sustainable facade execution process and new technologies for better performance of buildings. This was followed by a presentation on Façade Detailing for Low Energy Consumption by Stephen Tanno, Director Pre-Construction Services, Schüco International. He elaborated on the importance and significance of fine detailing and detailed on how robust detailing prevents energy loss through air infiltration and heat transfer. Next came the interesting keynote presentation by renowned architect Dongmin Shim, who is the Design Principal at Singapore based WOW Architects|Warner Wong Design. He mesmerized the audience showcasing his fascinating projects, explaining how vertical landscapes can be integrated into facades. He also elaborated on various ways to add symbolic visual elements into facades. 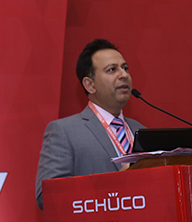 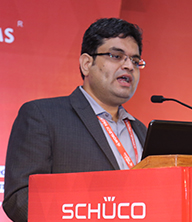 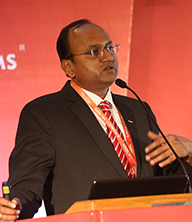 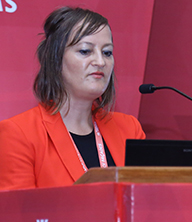 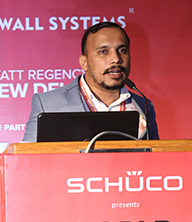 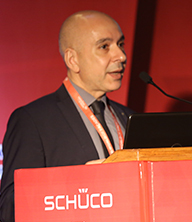 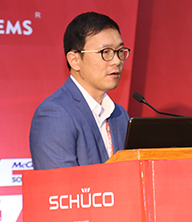 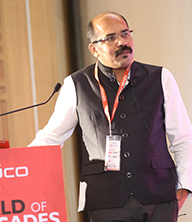 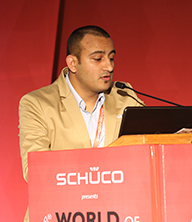 The conference adjourned for the networking lunch. After the sumptuous meal, the delegates flooded the exhibit area.

The second presentation in Session 3 was by the stalwart of glass Industry, Sharanjit Singh, Chairman, GSC Glass on “Evaluating Natural Light & Transparency Needs for Optimal Design”. He elaborated on glass selection to mitigate heat while retaining the advantage of natural light. He also discussed the factors to be considered for estimation of reflection and shading which would enhance human comfort and wellness. 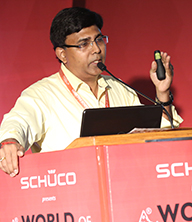 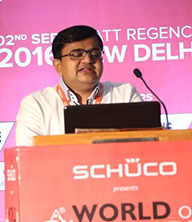 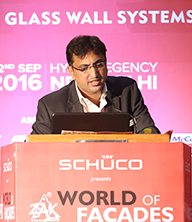 Jothi Ramalingam (Director, Winwall Technologies) spoke about ‘On-Site Testing of Façades’, explaining the need for on-site testing and why should it be done by a third party agency who has got expertise. This was followed by a presentation on “Myths about Stainless Steel Railings & Fittings” by Rajan Aggarwal, Vice President Projects, Ozone Overseas. He explained the need for checking structural safety in modular railings, choosing the right grade of stainless steel for hardware for various purposes, and the correct technique and installation examples with project case studies. The last presentation in Session 3 was by Kapil Chikodi, Head – Business Development, Glass Wall Systems on LED Integrated Façades. He enlightened the audience with his speech on latest technology of integrating LEDs into curtain wall system. The case study of façade lighting employed in Kohinoor Square, Mumbai & Mondeal Square, Ahmedabad were very inspiring.

The concluding panel discussion was moderated by Praveen Chaubey, Project Manager, Priedemann. The panel comprised of some of the stalwarts from Indian construction industry – Mayank Bhatnagar (Vice President, Bharati Realty), Amit Gupta (Partner, Studio Symbiosis), Anil Misra (General Manager – Projects, Max Estates), Niraj Borikar (Head Sales, FunderMax India) and Kapil Handa (Principal, Studio DRA). The discussion was on Façade Engineering for Higher ROI. The thrilling discussion pointed out on few constraints like stringent budget allocation for the construction of façade since it always falls in the tail end of construction and how the time constraints affects the quality of construction of facades. The panel stressed on the need to understand how the Form and design of the façade is important for optimal performance of the building which weighs more in terms of ROI. The panel also discussed on new facade technologies and their commercial edge over conventional ones. This panel discussion was an eye opener for the industry as it emphasized on the changes that need to be done in budget allocation – right from the process of selection of material to engaging an expert façade consultant and executing the construction of façade, sticking to the original design, bearing in mind both aesthetic and functional aspects.

The conference was complemented by display of products by many brands including Schüco, Glass Wall Systems, Modiguard, Kinlong, Fundermax, Siderise, McCoy Soudal, Alstone, Ozone and GSC Railings which attracted the delegates. They displayed their newly launched products and demonstrated the latest in technologies.

This 22nd edition of Zak World of Facades was, by all accounts and measures, indeed a great success. It was a significant day to remember as many key deliberations on critical subjects that have never been examined before in public were confidently addressed by one and all. 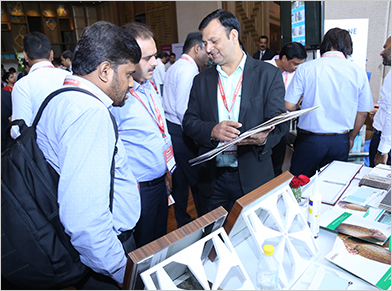 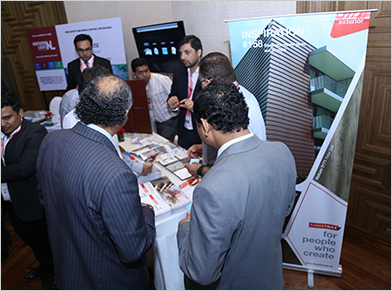 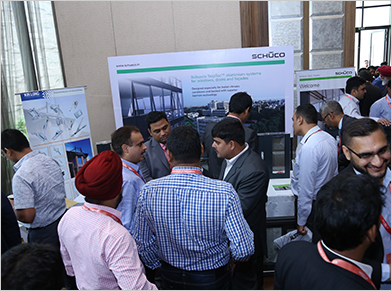 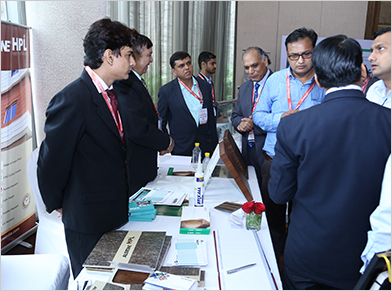 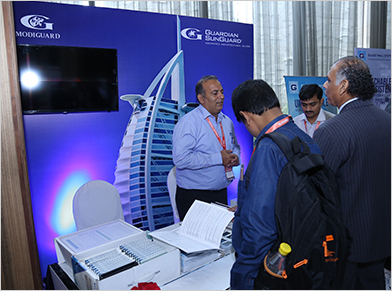