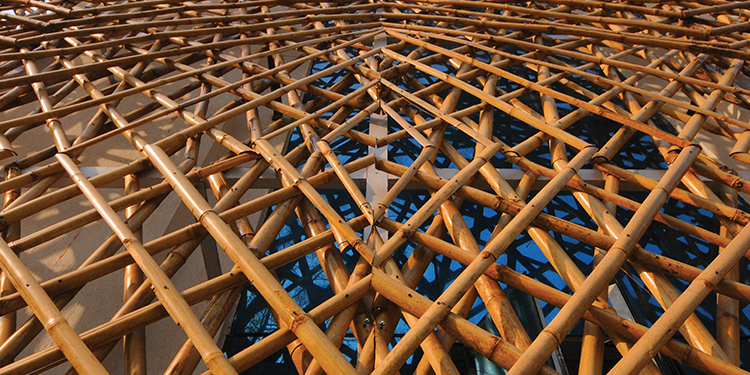 More often than not, the word ‘façade’ has been misconstrued as extrinsic, as a ‘put on’ appearance; the reason being that its creators have tended to exploit it for self-expression quite radically, ignoring the fundamental lesson that the ‘form’, of which the facade is a wholesome part, must correlate to the function it embraces.The facade of a structure is expected to fulfill functional as well as aesthetic obligations. Fundamentally, a building needs protection from weather conditions, the onus of which falls on the facade. However this outward looking envelope of an edifice literally and metaphorically gifts an opportunity to an architect to communicate a school of thought to the outside world. Through this skin, it gives a hint of its attitude to the context- whether it chooses to ‘fit into or stand out of’. A facade happens to be the first attribute of a building that a person takes note of and forms that ‘first impression’. What is likely to be missed is the interesting fact that it is this surface that separates yet connects two entities, the inside and the outside.

According to a Chinese proverb, ‘The taller the bamboo grows, the lower it bends. ’The humble bamboo which in bending shows more character than a rebelling oak, is one of the most versatile natural materials that can be used in buildings. Some of its lesser known facts such as its ability to be regenerated in months, it having an incredibly strong foundation, making no fuss about its conditions and adapting easily, sucking up carbon-dioxide faster than any other tree and many more make it very beneficial to the worlds ecosystem, currently in dire straits.’

Breaking free from the conventional look and feel of its other two DilliHaat counterparts with their vocabulary of exposed brick and stone, DilliHaat-Janakpuri takes a fresh look at the material palette that paints the multi-faceted programme it houses. Along with a material spectrum which is an eclectic mix of modern and traditional, are interspersed four eight-metre high towers along the site. Designed to resemble huge bamboo baskets, the two-storied buildings with roof top canopies are planned for outdoor activities. Closer to the entry, one basket houses the information centre, while another forms into a café. Wander more into the interiors of the site and the baskets hold a music centre and a museum.

Bambrance – The Bamboo Facade of a Garment Factory, Noida

o depict a garment export house that Supplies ethnic Indian fabrics and techniques to the global market, bamboo was chosen as it is as much an inherently native Indian material. The out-of-scale, exaggerated fabric weave interlaced like the textile structure forms the external skin of this factory facility. Designed to conceal the dull and uneven building below, indigenous bamboo sticks have been intertwined as a modular system and can be attached to any facade. This eco-friendly and dynamic surface has been naturally treated for weather protection.

These facades are designed as ‘non-facades’; they are narratives in themselves for they tell the story of what lies on the other side and much more!
Apart from being celebrated in the facade, bamboo is used in structures for shading, screens for baskets and food courts and as sculptures or used for street furniture. Saluting the natural beauty of its forests, bamboo has been planted as a soft-scape plantation along the boundary and to accentuate other trees.