Curtain wall is a building envelope that intends to support only its own weight and withstand the effects of environmental forces such as wind. It is not intended to assist the structural integrity of the building. There are two main types of curtain walling construction: “stick” and “unitised”. In stick construction, the curtain wall frame is constructed mainly on site with mullions and transoms supporting glass, spandrel panels, metal panels and brise-soleils, connected piece by piece. Each mullion is usually supported by the floor or perimeter beams.

In unitised construction, on the other hand, the curtain wall is composed of large units that are assembled in the factory, shipped to the site and erected on the building. Aluminium profiles are used to form the frame, which is normally one storey high. Opening vents, glazing and infill panels are built into units before being transported to the site. As with stick construction, each unit is usually supported by the floor or perimeter beams.

Stick curtain walling systems are versatile and allow for the integration of other systems, such as sliding doors and windows.

They tend to be less specialised and can be built by all types of fabricators as they are not dependent on having a large factory.

However, stick systems do require multiple steps to erect and seal the wall, which means more time is spent on site – an approximate rule of thumb would be that 70% of the work is carried out on site, with 30% in the factory. This incurs further costs, such as labourers’ time.

For unitised curtain walling, about 30% of the work being done on site, while 70% is carried out in the factory. The complete assembly of the units in the factory brings a number of benefits, which are:

• Concurrent manufacture and site preparation – units can be assembled while the structural frame is being built. The façade can also complete a floor at a time, allowing parallel internal work

• No need for scaffolding

• Can be installed from the interior of the building. This is ideal for high towers or building sites where there is a tight footprint

Another advantage of unitised systems is that, unlike stick systems, they do not transfer impact noises from floor to floor or horizontally from room to room. This is because the unitised panels are separated by linking gaskets.

The different materials (i.e. gasket to aluminium), become acoustically excited to different levels, thus creating a full separation at the junctions between units. The increased use of factory assembly introduces other important considerations, including the following:

• The workshop must be adequately equipped to handle finished elements

• Additional transport is required to get finished elements to the site

• Additional equipment is required on site for installation of the modules

Unitised façades offer a number of design options. They can integrate opening elements, such as top-hung and parallel opening windows, both of which can also be motorised for ease of operation. Sun-screening systems, spandrel panels and other infill panels can also be included. Aluminium is typically used for façade frames because of its strength and stability.

It is also highly durable, moisture and corrosion-resistant and 100% recyclable. Mullions in a unitised system tend to be slightly larger, because they use to have an open section, compared to the tube-shaped mullions used in a standard stick system. There are a number of options for frame finishes, including anodised aluminium and RAL powder coatings.

In terms of glazing, the specification can create different aesthetic effects. These include:

• Structural sealed glazing, where the glass is structurally bonded, giving a continuous glazed appearance to the façade

The recognised industry standard for curtain wall in the UK is the standard for systemised building envelopes (SSBE) from the Centre for Window and Cladding Technology (CWCT). CWCT is an industryfunded information provider and trainer in the field of building envelopes and glazing. It publishes both standards and guidance. SSBE incorporates BS EN 13830:2003 curtain walling, product standard, and other relevant performance standards and building regulations. The CWCT standard covers the performance specification, testing, inspection and assessment of building envelopes constructed from systems of components, which includes:

The CWCT standards for air, water and wind resistance are based on environmental conditions found typically in the UK. If specifying in other countries with a different climate, modifications must be made for e.g. a variety of standards can be applied in the Middle East including European and American standards depending on the country dynamics and climatic conditions.

The air tightness test measures the volume of air that would pass through a closed window at a certain air pressure. The peak test pressure is determined by the specifier based on one of the classes in BS EN 12152: 2002 curtain walling, air permeability, performance requirements and classification. The specifier must decide the level of airtightness required for a particular building. A higher test pressure may be specified if a more airtight building is required.

Water tightness testing involves applying a uniform water spray at an increasing air pressure until water penetrates the window. The peak test pressure is determined by the specifier based on one of the classes in BS EN 12154:2000 curtain walling, water-tightness, performance requirements and classification. The specifier must decide the level of water resistance of a particular building based on the degree of exposure to the weather. For example, in a coastal location, they may wish to test to a higher peak pressure.

The wind load resistance is a measure of the profile’s structural strength and is tested by applying increasing levels of air pressure to simulate the wind force. The performance requirements with regards to wind resistance of curtain walling are listed in BS EN 13116:2001 curtain walling, resistance to wind load. Due to the many diverse elevational layouts and variations within curtain wall installations, it is not considered practical to structurally classify the large variety of curtain wall systems and purpose designed constructions.

Unitised curtain walling can be installed either from the interior of the building using a beam on the floor above, or from the outside using a crane. The installation team must be safely connected to the structure via a harness. The modules are transported to each floor level, lifted to the correct position and installed onto each floor slab. This involves hooking them onto brackets which are secured to the main substrate and levelled using jacking bolts.

The curtain wall is an integral part of any building exterior. Curtain walls work as a shield to protect the exteriors of the buildings from water, air and it also slows down the process of fire spread, hence it provides a longer life to the building. Curtain wall systems are well equipped to deal with the requirements which enhance the living and working environment of a building.

There are several options of curtain walling systems available in the market. To choose the best solutions out of the available options becomes a tricky task sometimes. The selection of the curtains walls totally depends on the requirements of buildings that may vary according to the different weather conditions. Some projects with specific architectural design need tailored solutions for their façade. Quality curtain walling systems available in the market are robust, thermally efficient and strong and complies with the highest standards in energy efficiency and security. 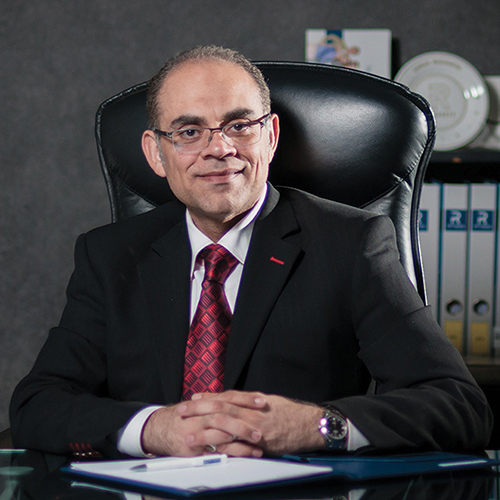 Ali Khalaf is an accomplished strategist with over 20 years of experience, leading a rapidly growing business in the aluminium systems industry within the construction sector. Currently, he is the Managing Partner and Director, Reynaers Middle East WLL - the local subsidiary of the leading European specialist ‘Reynaers Aluminium’ engaged in the development and marketing of innovative and sustainable aluminium solutions for doors and windows, curtain walls, sun screening and others. Ali has in-depth knowledge and expertise of aluminium systems, having previously worked in the same line of business with key players in the industry. Ali, a mechanical engineering degree holder, is a leading business development expert. He serves and supports Reynaers Middle East in achieving market leadership in the region.