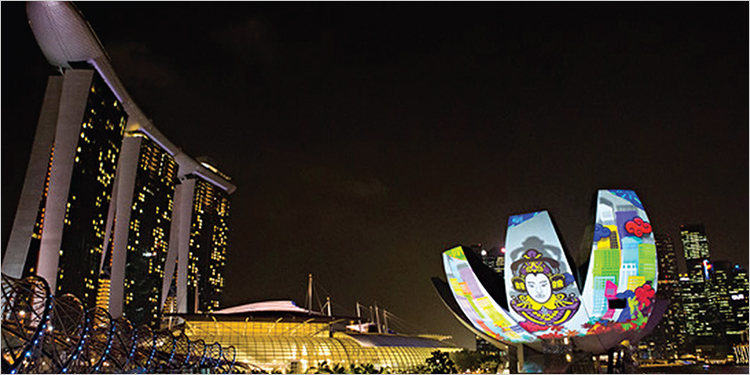 For centuries, the humble façades have stood tall with their archtypes in the overall aesthetic as well as technical performance of a building. While the Façade Engineering has evolved by itself as a science placing an impetus on solving aesthetic, environmental and structural issues of a construction, the industry is exploring new directions in terms of lighting up these spaces as well.

From the humble incandescent bulb to the state-of-the-art LED lighting to Laser lighting, the evolution of the light sources itself is a scintillating story to tell. With the world coming closer and spaces getting denser, the majestic façades have also received a face-lift with the changing times. 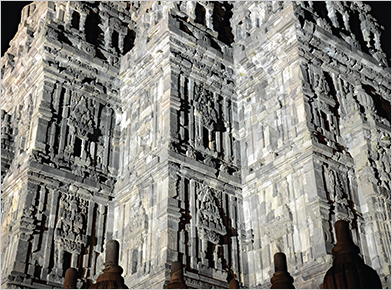 The latest trend in façade lighting includes that of a Media Façade, which refers to a mode of lighting by which lighting and light sources in particular are integrated into the front surface of architecture. So it is a lighting method that borrows from the digital media format to display graphics, text, and even video images.While the physical design of the building is mainly expressed during the day, this lighting method visually transforms the building in the evening, so it is being recognized as a new field in visual and spatial art that overcomes the structural limitation of ‘rigid ’ architecture with the colours of light and enhances the value of the architecture.So the architectural façade forms a synergy with art and is effectively used as the canvas to display media and digital arts on a large scale. Today Panasonic LED is exploring new possibilities with changing the way façade lighting operates for various spaces especially in the commercial and landscape segments. The world heritage project undertaken by the company lights up the historical monuments. The Prahmbanan Temple Premises have been lit by Panasonic LED. 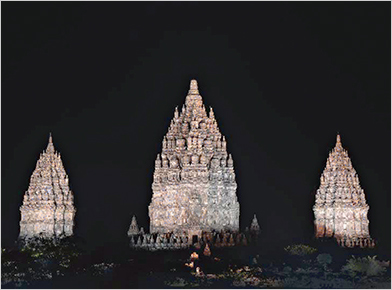 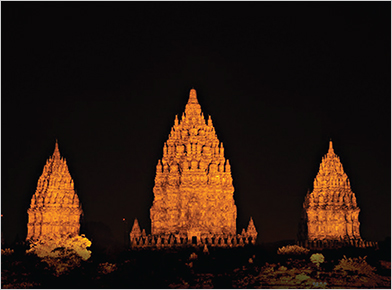 The Prahmbanan Temple Compounds in Indonesia were lit by Panasonic Corporation a while ago that stand a witness to its technologically superior product range relating to façade lighting. This temple is noted for its distinctive pointed pinnacles and is one of the largest Hindu temples in the region.
The Prambanan Temple Compounds were previously lit with HID (high-intensity discharge) lamps, but with rising electricity costs, there was a need to transition to more energy-efficient lighting. It was also expected that new, improved lighting would heighten the appeal of Prambanan, boosting tourism and contributing to the economic well being of area residents.
Panasonic proposed the introduction of LED as a replacement. Among its advantages are the ability to select from multiple lighting patterns (termed “silver,” “platinum,” “gold,” etc.), as well as an approximately 30% reduction in power consumption compared to the existing HID floodlights, more impressive illumination of the site (better colour tones, sharper shadows on the reliefs), and a significant decrease in maintenance work such as replacing lamps.
The process of introducing LEDs entailed major obstacles in terms of preservation. As it is not possible to intervene in the sites’ surrounding environments, LED floodlights had to be mounted on the bases for existing light fixtures, and existing wiring had to be used as well. Achieving optimum illumination under restricted conditions was a task similar to solving a puzzle.
Panasonic performed repeated early-stage simulations and on-site demonstration experiments, completing floodlight angle adjustments and determining lighting pattern settings before delivering the LED. The temple premises thus got highlighted with three different lighting patterns and also optimizes power saving due to LED.

Another trend in façade lighting is 3D Video Mapping that involves the projection of images to highlight the particular object. Asia’s only sustainable light art festival, “i Light Marina Bay 2014” showcased innovative content, the intelligent use of lighting as well as an international line-up of creative talents. The festival featured 28 innovative and environmentally sustainable light art installations from around the world. The Marina Bay waterfront was transformed into a magical space of light and colour for the public to celebrate both public spaces and creativity. Panasonic projectors were used to create this effect.

Global Lighting Designer President LEM Lighting Studio Japan, Shiho Nagamachi says, “Listen to the Voices Unique of the Places,” as her design ideology behind lighting. The façade lighting trends will keep evolving as architecture and building materials evolve further, Panasonic LED intends to stretch the boundaries further and explore new possibilities through their LED products for the Indian and overseas markets.

Panasonic has a history in developing the lighting technologies and light sources. Being the third largest lighting company in the world, its contribution to lighting arena is unparalleled than any other. Dr. Isamu Akasaki – one of the Nobel Prize winners of 2014 for the invention of Blue LED had worked for the Panasonic Tokyo Research Center, and his activities in that period contributed to the invention of the blue LED chip. Panasonic Corporation has introduced its world-class range in India through its wholly owned subsidiary Anchor. The Smart Archi range of architectural luminaires particularly forms a synergy with the requirements of architecture and even for façades.