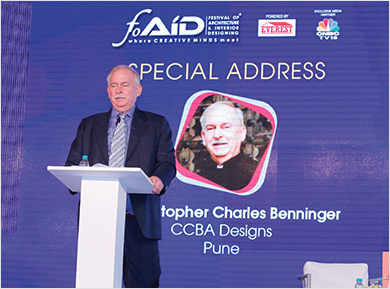 Festival of Architecture & Interior Designing (FOAID), an annual event that celebrates design, was held on 22nd & 23rd September at New Delhi. The 4th edition of FOAID created waves of networking, attracting over 2500 fraternity members under a spectrum of 2 days. Design Manthan (National Conference) witnessed 425 architects, interior designers and allied members in attendance who got inspired with 150 prominent speakers and jury members who shared their thoughts and ideas on the lines of “Let’s Uncondition” which was also the theme for FOAID 2017.

The convention was inaugurated by Shri Gaur Gopal Das, an international life coach. He shared his wisdom which connected the audience to think deeper and find simple solutions. Speakers were invited to discuss on many topics like – Is the Future of Architecture Political, The Psychology of Space Making, Happiness by Design, which had esteemed panel members like Prof. KT Ravindran, ShimulKadri, Manish Gulati, Madhav Raman, Bijoy Ramachandran, SwanzalKak Kapoor and many more.

Presentations by stalwarts of architecture

like Dikshu Kukreja, Sanjay Prakash, Vikas Dilawari and Dulal Mukherjee on topics like ‘10 people or situations who influenced my design’, ‘A lifelong passion’, ‘My Inspiration’& many more were well received. Keynote address by Ar. Christopher Charles Benninger was very involving and he encouraged the audience with his inspirational talk on his priceless contribution in the realm of design.

FOAID also hosted 4 awards competition of which one was Berger Architecture Ideas 3.0 which aimed at acknowledging exemplary work done by architects under the age of 35 and others being student competitions. FOAID aims to encourage the design students to come forward and display their innovative ideas, and one such initiative was ‘Expressions’ where top seven colleges of the north & east zone displayed their creative design installations which was judged by an esteemed panel of jury members. The 5th edition of Design Excellence in Mumbai is scheduled on 1st & 2nd December, 2017.