The elite conference from the house of Zak Group on façade design and engineering, successfully completed its 15th Indian edition in Bangalore.The second conference in 4th season, Zak World of Façades, Bangalore revolved around the theme of responsible façade execution to harnesss sustainability.

The one day conference, held at Hotel ITC Gardenia, Bangalore on 15th July, saw a never before gathering of some of the most prominent and appreciated names from the construction industry in India and abroad, sharing their expertise and experience in order to achieve best façade execution practices.

Cosmopolitan city of Bangalore has grown manifolds organically in the last couple of decades. The city is constantly striving to strike a sustainable balance between its ever-growing industry and residential population. Building façades play an irrefutable role in the functional-ity of a building and determine its prowess to provide for a comfortable accommodation while giving an exceptional experience. Needless to say, this edition exhibited some of the finest façade products and hosted some highly technical, but relevant to Indian context, façade talks. The event saw over 330 attendees who thronged the Mysore Palace (Ball room) of ITC Gardenia.

The endeavour was to unite the ever expanding brigade of experts in the field of façades and building envelopes, to bring to fore the novice ideas and improvise the old and thereby enabling an adept and empowered façade industry. The conference doubled up as a unique platform for networking and enhancing business relationships.

The 15th edition started on a positive note and Tariq Kachwala, Director of FG Glass, who was the Master of Ceremony for the event initiated the conference proceedings. Relating the past journey of Zak World of Façades, Syed Ahad Ahmed, Director, ZAK Group, welcomed the audience and hence begun the much awaited technical presentations.

The first session saw an informative presentation by Sourabh Kankar, Regional Manager Architectural, Modiguard, who took the audience ‘From Rendering to Reality’ and highlighted the ‘Principles of Glass Selection for Façades’.

This was followed by another power packed presentation by Dr. Prashanth Reddy, Managing Director & CEO, FunderMax who elaborated on “High Pressure Laminates (HPL) as a Façade Material” while explaining their benefits and highlighting aesthetic & functional superiority of of HPL as a sustainable façade material. Next to present was the knowledgeable and stern Tapan Mozumdar, Senior Divisional Manager – Projects at ITC, who took the au-dience through a ‘Tale of Two Cities’, drawing parallel between the façades of two building in different climatic zones, and asserted that costliest is not always the best.

Session 2 began with Vijay Sawant, Technical Head of Q-Railing, who explained that ‘Higher is Now Safer’ and if structural safety norms are adhered to, modular railings are a way to go. 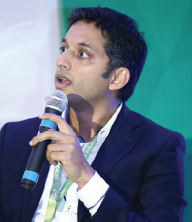 As the day progressed, came the Keynote presentation of the day, which was given by Jae Kim, Vice President, Callison RTKL. He elaborated “The Art of Façade” and explained ‘How Building Envelope Enhances the Art in Architecture’ by means of texture, material etc., and the challenges and opportunities with respect to regulatory constraints.

The conference adjourned for the networking lunch and the delegates thronged the exhibit area while eating or waiting for their turn at the buffet.

Continuing the flow of technical discussions, the next presenter, Tanuj Sharma (National Head Commercial, Kinlong Hardware India) spoke on ‘Choice of Façade Hardware’ and explained how hardware is customised for each application and also casted the need and importance of using castin anchor channels in the minds of façade industry professionals. key highlight of his presentation was the case study on the tension rod façade structure at Godrej One, Mumbai. Next to present was S. Ravishankar, Manager – Application Engineering at Dow Corning, who delved on traversing the path from ‘Innovation to Sustainability by means of a Collaborative Approach’. He explained the concept of point fixed glass façade using seamless bonding technology and their concept of Quality Bond which is their means to build customer confidence beyond structural glazing The power packed session was concluded with an equally powerful panel discussion on “Sustainable & Efficient Façades”.

Session 4 commenced with the presentation on ‘Building Envelope – More than an Ornamental Feature’ by Vikram Desai, Principal/Studio Head, CnT Architects Final presentation of this extraordinary conference was by Kapil Chikodi, Head – Business Development at Glass Wall Systems who spoke on ‘Façade Explorations’ vis-a-vis design evolution in residential high-rises and options in high-rise window designs. He also put for-ward a case study on The Capital building of Mumbai.

The conference was complemented by a unique display where some of the most fascinating façade products were showcased. Schueco displayed their Panoramic Façade System – Schueco FWS 35 PD while Glass Wall Systems showcased their exceptional façade building services. Modiguard was present with their high performance Sunguard range of glass and complementing that was the high strength and acoustic interlayer systems by Kuraray. The display included high precision hardware from the houses of Cotswold, Kinlong, Lavaal and specialised adhesives and sealants from Dow Corning. Premium and high on safety Modular Railing Systems were exhibited by Q-Railing, Germany. McCoy Soudal displayed their silicone and adhesives and Siderise from UK exhibited their unique range of perimeter barrier systems for fire and acoustic isolation.