After stupendous success of the initial three seasons, the fourth season of Zak World of Facades conference series kicked start in Mumbai on 22nd April at ITC Maratha, with an all new emphasis on the National Building Code and an every pressing issue of the fire safety and the return on investment for facades.

The one day conference held at Hotel ITC Maratha, Mumbai, on 22nd April saw a never before gathering of some of the most prominent and appreciated names from the construction industry in India and abroad, sharing their expertise and experience in order to achieve best façade execution practices.

As the city’s buildings face some peculiar challenges with respect to providing sustainable accommodation and working abodes, façades play an irrefutable role in their functionality. Needless to say, this edition exhibited some of the finest facade products and hosted some highly technical, but relevant to India context, facade talks. The event was intimate, with over 415 attendees who thronged the Grand Ball room of ITC Maratha.

The endeavour was to unite the ever expanding brigade of experts in the field of façades and building envelopes, to bring to fore the novice ideas and improvise the old and thereby enabling an adept and empowered façade industry. The conference doubled up as a unique platform for networking and enhancing business relationships. 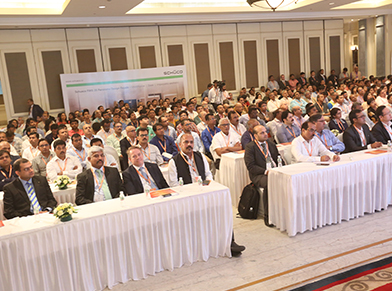 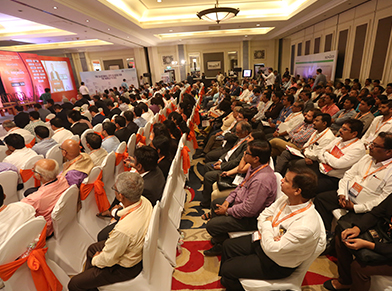 In one of the many firsts that Zak World of Facades is known to bring to the industry, the 14th edition started well in time as per the schedule and this was possible due the cooperative audience who took their seats well before time. On a positive note, Tariq Kachwala, Director of FG Glass, who was the Master of Ceremony for the event initiated the conference proceedings immediately afte. Relating the past journey of Zak World of Facades, Syed Ahad Ahmed, Director, Zak group, welcomed the audience and hence begun the much awaited technical presentations.

The first session saw an informative presentation by Sourabh Kankar, Regional Manager – Architectural, Modiguard, who took the audience From Rendering to Reality’’ and highlighted the principles of glass selection for façades.

This was followed by another power packed presentation by Dr. Prashanth Reddy, Managing Director & CEO, FunderMax who elaborated on “High Pressure Laminates (HPL) as a Façade Material” while explaining their benefits and highlighting aesthetic & functional superiority of of HPL as a sustainable facade material. Next to present was the dynamic Micha Pawelka, Managing Director, Priedemann Building Envelope Consultants – United Arab Emirates, who asked the audience a petulant question – “Façade Guidance Services – Is It an Add-on Investment?” and fluidly answered the same while presenting a case study on consequence of not availing a competent service team.

Session 2 began with the 1st Key Note presenter of the day – Raj Patel, Managing Director & Design Principal, KEO International Consultants – United Arab Emirates who enthralled the audience with a unique outlay of Explorations in Forms, Façades and Patterns. He discussed on diversity in façade design patterns, façades with the third dimension of depth. He kept the audience awestruck as he then proceeded to present some unique case studies like that of Kuwait Investment Authority HQ, Qatar University Administration Building etc.

As if taking the cue, explaining how design can be transformed to real facades, Matthijs Bruijnse, Senior Vice President, Schueco International – Germany shed the light on “System Façade Solutions & New Innovations” where he explained the evolution of façade at macro level and drawing synergies for the Indian market, He also spoke about their product Panaromic façade systems – Schueco FWS 35 PD. Antony John, Engineering Director, Schueco India joined Mr. Bruijnse in presenting the topic.

The conference adjourned for the networking lunch and the delegates thronged the exhibit area while eating or waiting for their turn at the buffet Session 3 opened with an interesting presentation by Harish Gupta, Senior VP – Architecture, Glass Wall Systems on “Changing Face of Residential High Rise Façades”. He elaborated on design evolution in residential high rise facades while exploring the possibilities of automation and BMS integration in windows for high rises. Presenting next was Ray Nakada, Manager Asia-Pacific Market Development, Kuraray Interlayer Solutions – Singapore who explained how one can achieve limitless design options and still get performance and safety by using High Performance Interlayers

Before the conference moved to the next presenter, everyone was pleasantly surprised by the entry of the celebrity architect Hafeez Contractor who was invited as the guest of honour to be felicitated for his extraordinary contribution to the facade industry of India. Mr. Contractor received the token of appreciation from the Zak Chairman Syed Zakir Ahmed, amidst a loud and standing applause and the industry biggies joined him on stage in honouring the star of the evening. He was recently honoured with the highest civilian award – Padma Bhushan, by the honourable president Pranab Mukherjee. 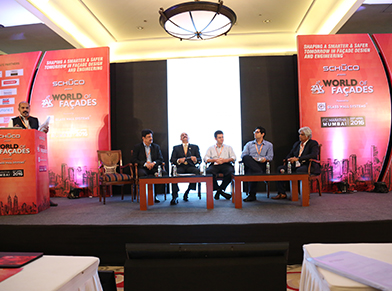 Continuing the excitement, the next presenter, Tanuj Sharma, National Head – Commercial, Kinlong Hardware India spoke on ‘Choice of Façade Hardware’ and explained how hardware is customised for each application and also casted the need and importance of using cast-in anchor channels in the minds of facade industry professionals. key highlight of his presentation was the case study on the tension rod façade structure at Godrej One, Mumbai. Next to present was Mustafa Abbasoglu, Area Manager Turkey, Near & Middle East, Eternit (Swisspearl®), who delved on Designing Lasting Values with Cement Composite Façade Systems and introduced the fantastic new product Swisspearl® while presenting a case study on the Denver Botanic Gardens, USA.

Another high point of the conference was when The Chief Fire Officer, Mumbai Fire Brigade, Prabhat Rahandale, who kindly took out time from his extremely busy schedule to attend the conference, highlighted some of the key pain areas of the contemporary Indian buildings where they lack the basics of fire safety. He in a very candid talk took the audience through an enlightening journey on how the buildings can be made safe and all it takes is nothing more than a few small but significant steps that we all need to take on individual levels.

Session 4 commenced with the presentation on Advanced Building Envelope Solutions by Lorenzo Lilli, Director, Lilli Systems as he explained the innovative concept of ‘Point fixing façades with spherical joint without drilled glass’, ‘Aluminium framed and frameless balustrades’ complemented with a case study on the Sandton City Centre Johannesburg, South Africa. 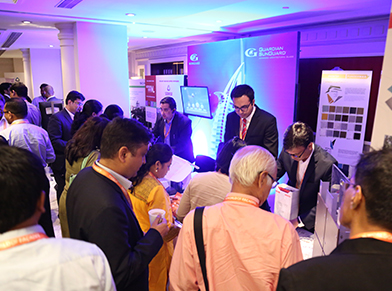 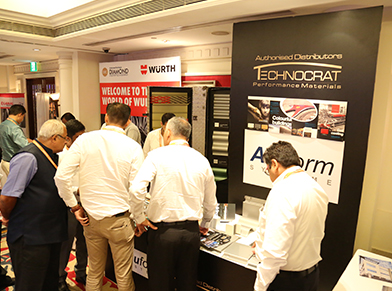 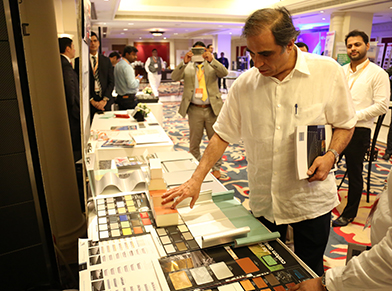 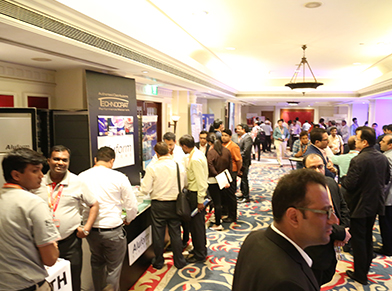 The conference was complemented by a unique display where some of the most fascinating facade products were showcased. Schueco displayed their Panoramic Facade System – Schueco FWS 35 PD while Glass Wall Systems showcased their exceptional facade building services. Modiguard was present with their high performance Sunguard range of glass and complementing that was the high strength and high performance interlayer systems by Kuraray. The display included high precision hardware from the houses of Cotswold, Kinlong, Lavaal and a full range of point fixed hardware system from Lilli Systems from Italy. Fibre cement cladding from Swisspearl, fine ceramic cladding from Qutone and High Pressure laminates from FunderMax along with unique PVDF coating system by Akzonobel shone bright as the architects and users sought for high end facade alternatives and rich look. Engineered formwork was displayed by Technocrat and various facade connection techniques were on display by Wuerth. McCoy Soudal displayed their silicone and adhesives and Siderise from UK exhibited their unique range of perimeter barrier systems for fire and acoustic isolation.