Home > Facade > Beyond the Façade of Glass

Beyond the Façade of Glass

Glass has fascinated mankind since its advent in the early 500 BC. From its humble beginnings as a window pane in the luxury homes of Pompeii to forming structural members in modern buildings, glass has undergone a major evolution.

For the most part of the 20th century, fully glazed façades remained the mainstay of commercial construction. The ubiquity of glass façades and structures is echoed on glass’ abilities to enhance, diffuse, reflect and transfer light as a result of its transparency. It can be toughened, bent, insulated, and laminated to suit varied purposes.

However, since discussions of architecture and construction turned to sustainability, the use of glass has faced scrutiny. The claim to its inefficiency inevitably comes down to the issue of solar gain. Full-height glazing lets in a substantial amount of light and along with it a great deal of heat, which then requires air-conditioning – itself a generator of heat – to solve the problem.

Misunderstanding around the use of the glass stem from inefficient use of the material and design inadequacies. Provided their performance potential is considered in the design stage, a thoughtfully designed skin not only characterizes the appearance of façade but makes a new building work more effectively for its owners, occupants and the environment. It can also transform the performance of an existing building. As the interface between interior space and the exterior environment, a building’s skin plays a crucial role in heat and light exchange.

One of RSP India’s benchmark project, CISCO Campus in Bangalore, incorporates several energy-saving technologies. The façade design was rooted on intensive heat ingress and solar insulation analysis. Sustainable features integrated in the façade include solar shading, high performance glazing, and high levels of insulation. The light shelves on the façade  allow light to penetrate through the building, while providing enough shade near the windows, thus preventing glare.

This façade, rather than serving as a static enclosure, reveals the potential to redirect and filter daylight, manage heat transfer, enhance occupant well-being, and create visual and physical connections between the inside and the outside. 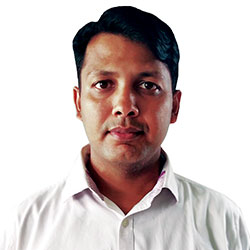 Roop Chanda, Associate Director, RSP India, has over 15 years of professional experience in the design and construction industry, with special emphasis on project management and operations. He has a master’s degree in construction management from NICMAR Hyderabad and an MS in construction management from Texas A&M University. He is a LEED accredited professional from USGBC. Vinod Kamath is an Associate at RSP India with over 15 years experience handling projects across multiple sectors and typologies including IT campuses, commercial complexes, retail spaces, residential developments and Interiors. RSP is a leading design consultancy with over 63+ years of experience in a diversified range of projects. Established in 1996 and headquartered in Bengaluru, RSP India has a diverse portfolio.