The fascia of building – be it modern or historic – is one of the most essential aspects of architectural design, governing factors from the ingrained identity of a building to the designer’s first impression on both the inhabitants and visitors. In the modern architectural world, façades have become an important showcase of technology, branding, identity for owners, designers and building developers alike. New materials, advanced detailing and versatile possibilities are adding fuel to the fire in the dynamic world of BIM driven buildings. Also, the competition to design a better and unique façade is also building up not only in India, but globally as well. Taller, grander and complicated the façade is, the more popular the building becomes. However, it is important to note that the night visibility of the building façade is also becoming important nowadays. Such efforts enhance the image of the city which has a rippling effect on the overall lifestyle and visibility of the city. Façade lighting thus has an important role in building a world-class city. The benefit of façade lighting can be seen in all types of buildings – whether old or new.

Light and architecture are inseparable virtues of built and unbuilt spaces. Light is of decisive importance in experiencing architecture, as one cannot experience form without lighting. Many great architects have underlined this intertwined relationship through theories and real projects including Le Corbusier, Louis Kahn, B V Doshi, Raj Rewal, Charles Correa and many more. Much has been published in this regard and cannot be emphasised more.

With unprecedented urbanisation and most of the global GDP growth taking place in the world’s top cities, more and more municipalities are investing in lighting to make their cities more livable by creating vibrant urban activity at night. New lighting on building structures can –

Around the world, many large structures are being impressively lit in creative and artistic ways to stand out, building unique and strong identities for them. Making these structures dynamic help them become part of our lives and can define a location, a city or a brand. It can also influence how we respond to a place and our emotional connection to it. And now with the flexibility of remote programming, this lighting can change almost instantaneously, keeping a brand fresh or a destination compelling. This can help attract tourism and drive commerce.

The safer and welcoming a city feels, the more citizens and visitors will enjoy it. Lighting creates exciting spaces, making people spend more time there, eating, drinking and taking in the sights. Using beautiful, energy-efficient lighting to create vibrant social spaces can also have a dramatic effect on a city’s reputation. It enhances tourism and nightlife, generating valuable income for hotels, restaurants, bars and shops. Hence the city becomes a more attractive destination for people and businesses. An investment in lighting that practically pays for itself.

Over the last twenty years, architectural lighting has become more than simply a means of ensuring security and visibility. It is regarded as an essential component of city planning and development and an excellent way to reveal the heritage and identity of a city, whatever the size. Architectural lighting can give a city a nighttime beauty that matches its daytime image. By altering the urban landscape, the relationship between the citizens and their city can be redefined and their living environment can be enhanced.

Lighting effects range from enhancing and highlighting façade elements, to totally transforming the face of a building. Multiple factors affect lighting design and this article attempts to bring the same perspective to designers who wish to attempt the same.

a. What to Light?

a. What to Light?

These viewers can be vehicles waiting at an adjacent traffic light, or people waiting at the entrance and exit of a building, immediate public plazas, or if for high-rises, the people in a larger context. Having water bodies in the periphery can enhance the lighting effect by reflecting it. The peripheral illumination around a building can cause the lighting effect to diminish. Hence it is advised to choose the darker parts of the façade, for e.g. the upper parts and move away from prevalent and ambient street lighting. Also lighting fixtures and effects should also be positioned in such a way that they do not cause glare to viewers.

The design style of the façade can determine what elements (like columns, windows, spires, sunshades, etc.) to illuminate. For example, a building having a specific pattern of solidity and void, through a colonnade in the façade, the columns can be highlighted to highlight this pattern at night.

Any design activity involves a triggering ‘intent’ of design, or the story behind the design intervention. It is important to adjudge the intent of façade lighting. This concept then governs every design decision and answers questions like what mood to create, what style of lighting to choose, etc.

Identify, it should be based on the larger context for which the structure is famous for, and what kind of spaces and people it caters to. Also determine how your building can add to this image of the city, as a landmark and a point of attraction.

The typology of the building is a major factor for intent of the design. A retail space can be activated by an extravagant and celebrative style of lighting, an office tower can become an icon and a landmark in the city through dynamic and far-reaching lighting style, while a hospitality building can be made more welcoming through lighting.

The original building design and concept can be upheld through lighting design as it enhances elements in a façade. It is recommended to carefully identify if the façade has a unique style, rhythms, patterns, symmetry, scale, balance, contrast and mood of the space which can be highlighted through lighting.

The following are the general considerations and precautions one must keep in mind while designing the lighting for a building façade. On the basis of the specific conditions of each lighting project, some of these considerations can gain more importance while others can be neglected.

● Height of the building/elements – This represents the actual height of the lit surface.

● Position of light source – To be practically located, owing to vandalism and maintenance possibility. Also proximity to people as well camouflaging techniques are important pointers here.

● Width of the building/elements – This has impact on number of light sources and beam angles to be chosen.

● Façade material-texture, reflectance, colour – This is a strong clue to choose the overall lighting strategy apart from the scale of the structure.

● Peripheral light in immediate context –It is important to take note of existing ambient lighting in the surroundings.

● Weight of the light fixture

● Avoid light pollution – Façade should not be excessively lit. Carefully choose what elements to be lit. Need to design façade lighting for the most viewed/most prominent sections of façade with least peripheral light.

Prevalent lighting techniques of today include

● Direct View – The fixtures are placed on the façade to be seen. E.g. Media façade – recommended for glazed façades.

● Grazing – The fixtures are placed very close to the façade with high illumination at the base and receding with the height – highly recommended for textured façades.

● Washing – The fixtures are placed little away from the façade uniformly washing the façade – recommended for specular finished and flat façades.

● Flooding – The fixtures are placed far from the façade with uniform illumination of the façade. Hence termed floodlighting.

Façade lighting is not rocket science, but needs a focused and sensitive approach towards the intent. A little bit of practice and experimentation can bear great results and generate high return on investments in this rare category of lighting especially in Indian context.

Personally, I feel this genre has not been explored to its full potential and much more can be achieved by young designers in coming future. We would try to showcase a variety of contexts, architecture and façade lighting response in further articles through case studies.
Lighting 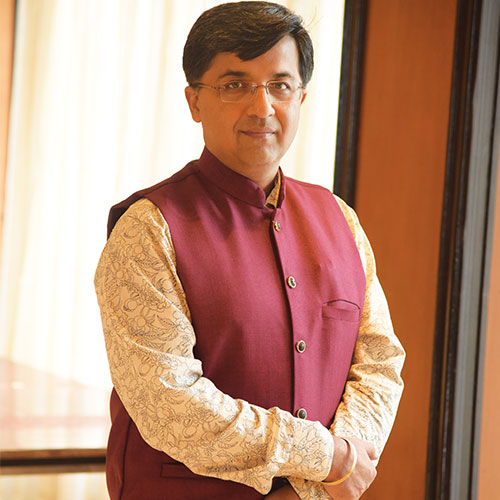 AR Ashish Bahal is a professional with a Bachelor’s Degree in Architecture (SPA Delhi, 2001) with over 18 years’ qualitative experience in design, construction management in interiors, buildings, real estate, industrial and development sector. He has a diverse and unique work experience as an entrepreneur, architect, interior designer, project manager, development expertise and technical marketer with demonstrated ability to focus on technologies, interiors, infrastructure, social development, networking, habitat, construction, lighting and architecture. AR Ashish Bahal works for Signify as part of the National Application Specialist and brings green design and aesthetic approach forth through his work. He has worked in many high profile lighting projects with Signify/ Philips. He is also a permanent faculty at the Philips Lighting Academy.