Parametric Representation of Facade for Optimisation 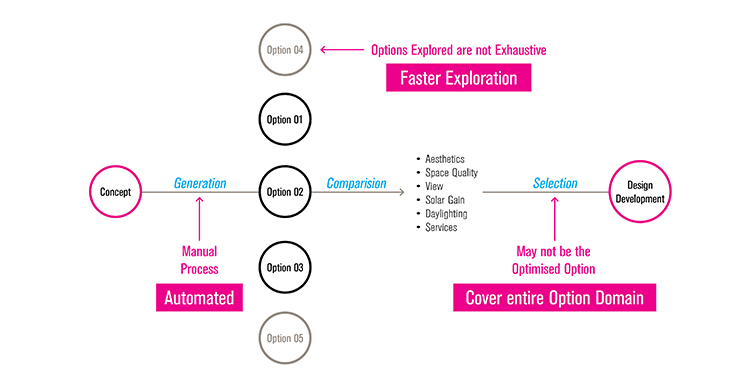 Conventionally, concepts and/or options are modelled suomoto, and environmental analysis tools are used for validation in the later stages of design. Architects design parallel facade concepts at the concept design stage. Concept in this context means a design system using which different options can be generated – for example, horizontal fins or vertical fins or a combination of horizontal and vertical fins. Upon consultation with the client, one of the concepts is selected to be developed further (as shown in Fig. 1).

If the options are plotted on a Cost vs Performance graph (as shown in Fig 2), they are noted to be randomly distributed. These options which are usually designed using thumb rules, and compared within themselves ought to lie inside the shaded circle in the graph. In the example of a design system of vertical fins, among the two, the option with 600mm deep fins will be better for daylight; but the global optimum might lie between 300-600mm depth and 750-1200mm c/c distance. Even for such a simple system, finding the best combination of depth and c/c distance is impossible without generating and simulating all the possible combinations. Such an exploration is not feasible when performed manually because of the time required to do so. Consequently, there is a need of a system and a workflow which take care of the following:

These requirements are met by the use of computation which exploits the speed, memory and calculative power of computer and applies them strategically in the design process. 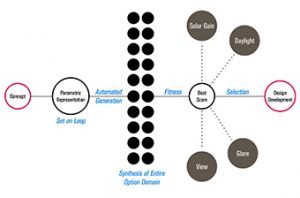 The parametric workflow has three key parts (as shown in Fig. 3) described as following:

Using computation for design exploration and optimisation has always been a niche service since the development of Sketchpad by Ivan Sutherland in 1963. Since architects are not formally trained in computation, such methods were used by an exclusive group who could develop custom codes in either 3D modelling software (for eg, AutoLISP in AutoCAD) or generate 3D images and models in traditional coding languages (for eg, Processing built on Java). The challenge lied in bridging the gap between 3D modelling and coding, and using it for performance calculations or simulations. But recent development of sophisticated computational design tools has simplified the integration of computation in the design process. Visual programming languages like Grasshopper (which runs on 3D modelling software Rhino) and Dynamo (which runs on Building Information Modelling software Revit) have made it easy for architects to undertake the task of coding. These new languages are connected with environment analysis tools like Ecotect, eQuest and EnergyPlus, which makes the automaton of iteration and simultaneous simulation simpler.

Parameters are can be divided into the following two types:

Both kinds of parameters can be variable or constant. In the example of a design system of vertical fins which is optimised for daylight, the depth and c/c distance are extrinsic and variable parameters. The other kinds of parameters which can constitute a complete parametric representation for this example are as following:

The technique of parametric representation opens new ways of interpreting geometries. It marks a paradigm shift where relationships between elements are used to manipulate and inform the design of geometries and structures. The focus shifts from the process of modelling geometry, to the process of defining geometry. The designer’s attitude thus transforms from developing a pre-conceived idea of a form and directs towards the form-generating rules and the dependencies between the parts.

Case study- Façade of a Hotel

Objective: To optimise the façade for minimum solar gain and optimised daylight

Note that, optimized daylight is calculated using daylight factor. IGBC New Buildings Rating System version 3.0 prescribes that the percentage of regularly occupied spaces in the building, which achieves daylight illuminance levels within the range 110-1100 lux in a clear sky condition on 21st September at 12 noon, at working plane should be higher than 75 per cent. This is analogous to a daylight factor of 2.

The following strategy is adopted to optimize the façade: (Fig.4) 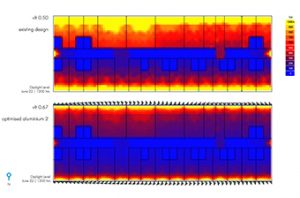 The solar shading coefficient studies show that horizontal shade is required for the summer months and vertical shade is required for the winter months. A combination of the two make the facade look like a series of grillage (as shown in Fig. 5).So, instead of a direct super-imposition of the horizontal and vertical shades, a hybrid fin is conceptualised which is derived by interpolating the intersections of the shades and the mid-points of the vertical shades. The configurations are shown below. The hybrid fin has a contemporary expression, which animates the facade and makes it dynamic. 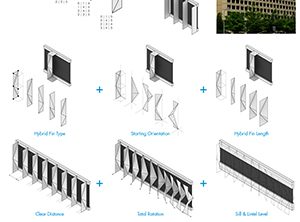 Following are the parameters used for parametric representation:

These parameters yield 77,24,800 possible combinations (Fig. 6). Manually modelling and simulating these many combinations is practically impossible. Parametric representation aids the conversion of the concept of hybrid fins (genotype) into different variations (phenotype) based on the domain and discretization.

The summary of result of optimization is shown in Fig. 7. The following highlights the method for reading the same (from left to right):

Genetic algorithm is used to find the optimised fin for the facade. The algorithm generates and iterates through generations of solutions called candidate solutions. Each generation consists of a fixed number (say 50) of solutions. Parameters are randomly generated for the first generation of the algorithm. Then, each of those solutions is evaluated against solar gain and daylight factor. The best solutions (say top 50 per cent, i.e. 25) are then selected and taken to the next generation by default. The rest of the candidates (remaining 25) of the next generation are populated by mutually combining the parameters of the best solutions of the previous generation (say 10), by mutating some of the parameters of the best solutions of the previous generation (say 10), and by introducing new candidate (say 5) solutions by generating all the parameters randomly. This process is iterated until a benchmark is reached or a pre-defined number of iterations are computed (in this case, 1000). Genetic algorithm uses techniques inspired by natural evolution, such as selection, crossover and mutation. The solutions of the last generation (marked as optimized solution in Fig. 8) converge around daylight factor of 2. The highlighted solutions are marked in the solar gain vs daylight factor graph. Optimised solutions with solar gain less than 70 per cent have vlt lesser than 0.21 (existing benchmark).