Glass has been present for more than 5000 years on earth. Its earliest existence was noticed in Egypt and eastern Mesopotamia, where it existed in the form of beads. Later, craftsmen around the world learned to blow it into different shapes and colours to produce unique artefacts. The first examples of glass in architecture appeared in Roman civilisations where the glass was put in wood and bronze frames to open up buildings towards outside environment. Glass gave an opportunity to experience outside environment and light while being indoors. Therefore, glass became a favourable material for wrapping buildings by architects.

Many innovations happened in glass production and manufacturing, but the major shift in glass production was the result of an invention by British scientist Alastair Pilkington. Pilkington has developed the process of manufacturing float glass by casting it on the bed of denser liquid tin. This process allowed the glass to be manufactured in bigger sizes with fewer imperfections, making it apt for architectural applications.

Soon after the float glass was discovered along with sealants, glass was started to use as a façade material in the form of curtain walls. Some earliest examples (Img 1) were glass and steel building of Illinois Institute of Technology in Chicago (1940), Seagram building New York (1958), and General Motors Technical centre Detroit (1955).

With recent technology and developments in the 21st century, there are innumerable possibilities of innovations in building glass facades. Today, architects and engineers can employ computational tools for the design and production of architectural glass facades. Some aspects that can be enhanced using parametric tools in glass facades include their environmental performance, their size and orientation on a building’s surface and their 3-dimensional geometry to attain a specific design agenda.

Focussing on geometry optimisation and shaping of free form glass it can be observed that Doubly curved, spherical and complex curvature glass are some of the new products that express a distinct architectural language in the realm of glass facades today. Architects are creating façades that are no longer planar or composed of a plain sheet of glasses (Img 2).

In such façades, first individual glass component ideas are modelled in the digital environment using parametric design tools along with their assembly instructions. Eventually, those 3D digital design models are realised by the latest shaping techniques of glass used in the industry. This process is illustrated in Fig 1. This article talks about the process that is employed with shaping techniques to produce those free form, curvy and wavy façades through an example of a building constructed in Germany. But before listing details of that building, a glimpse of current glass shaping techniques is inevitable.

Broadly, there are two types of the process by which a glass can be formed into a particular shape. The first method is hot bending in which glass is heated to high temperature and then moulded to the desired shape.

In this process float glass sheet is positioned on a Img 2 – Emporia Mall façade – Malmo frame of steel or a mother mould of the desired shape and it is heated gradually to a temperature up to 650°C. This results in the glass to lose its plastic and brittle state to achieve the shape of the mould. Interestingly glass with a radius of 2m or greater shapes itself by sagging under its own weight due to gravity.

An example of such buildings includes Zaha Hadid’s Nordpark Railway Station and façade of Elbphilharmonie building in Hamburg. Another technique is called cold bending technique. In cold bending, glass is bent to shape on-site during the assembling of façade.

External pressure is used to shape the glass along with pressure bars to hold the glass in shape. This technique has been used to bend glasses up to 10m in radius. Buildings with coldbent glass include Jinso Pavilion in Amsterdam and IAC Headquarters New York (Img 3).

Glass shaping techniques coupled with architect’s parametric free form design model evolves into enthralling glass facades. To witness the use of these computational tools along with these shaping techniques an interesting case example to examine would be façade of Elbphilharmonie building in Germany designed by Herzog & de Meuron architects (Img 4).

Elbphilharmonie building in Hamburg is a mixed-used building housing a music concert hall along with hotel and luxury residential apartments. It is an extreme example of glass engineering coupled with the use of computational design tools. This building consists of free form glass units designed and assembled using architecture design technologies.

For this project, the architects created a separate digital team which developed parametric design tools using computer algorithms to explore the geometry of the glass. Parametric tools are a set of systems designed to generate design results based on different parameters specified by the designer. Therefore, such tools facilitated this complex project with free form glass geometry and a large set of design data related to variations of each façade module.

Façade concept of this building includes two modules of glass that are assembled in a varying manner according to the function behind it. This led to the creation of a unified glass facade to impart crystalline character to the building.

Each module has been designed and modelled using NURBS surfaces in the digital parametric software where they are bent and deformed to create the shape of glass modules that opens to views, air and smell of the surrounding port environment. Eventually, all modules were parametrically arranged on the façade to create apt openings and aesthetics (Img 5).

Façade glass module 1 was modelled by deforming one edge to allow inserting a black aluminium oval window for ventilation. These modules are mainly used in the hotel area to allow openings. These modules are used in different configurations in the whole façade by rotating their orientation or alternating sides of deformations.

Whereas Module two is designed as a y-shape unit composed of deformed glasses topped with a fibre glass reinforced plastic. Type 2 module has been used in foyer areas along with loggias created to enjoy outside air and views. These glass modules were manufactured by hot bending technique using moulds where after heating glass sagged under its own weight to achieve desired mould form in the furnace.

A chrome dot pattern was designed and printed on each glass module using the parametric algorithm to improve g value of the glass by 25%. Eventually, all glasses were coated with sun protection and heat insulation coatings to achieve sustainable glass facade.

Finally, from the above article and case example, it is evident that glass facades in the age of parametric design has led to a new era of glass shapes and façade configurations. These façades can be more free form, performative, sustainable and collaborative from concept design stage.

Further advancements in the glass façade arena portray an intriguing possibility of a complete automated file to factory digital production systems. These systems would enable architects to have more control in the production process, resulting in the increased creation of such free form glass facades. 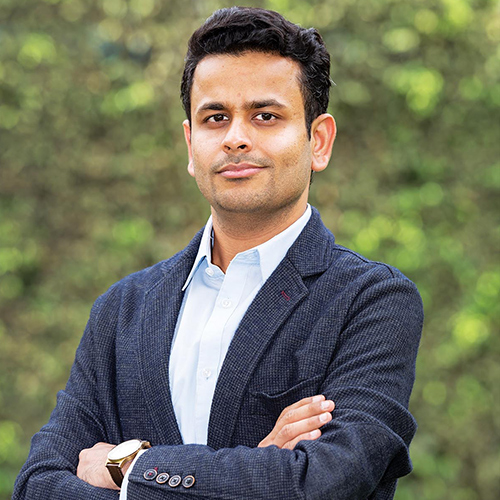 Ar. Gaurav Goel holds Masters in Arch. Technology from Uni. of Nottingham England, and a Master dip. in Parametric design from Spain. He is a gold medallist in B.Arch. from Amity University. Gaurav Goel founded his architecture studio Parametric Curiosity in 2016 with a social media blog for sharing parametric explorations in the field of architecture along with creating online educational videos. Besides, he has attended international workshops such as visiting the school of Architectural Association London and workshop with Mc-Neel Barcelona to learn nuances of algorithmic Design. He has taught in Madrid and regional colleges of India. Goel’s research interests lie in exploring architecture using computational tools. His projects include a school in Kanpur, hotel in Lansdowne, pavilion proposal for CEPT workshop and residences in Delhi and NCR.