Led by Varun Kohli, Principal at Merge Studio, the team has created a rigorous process of such integration process where  environmental analysis, financial feasibility and other parameters are assessed in tandem with the design process, thus allowing them to solve for varying problems and often creating opportunities from initially perceived constraints. 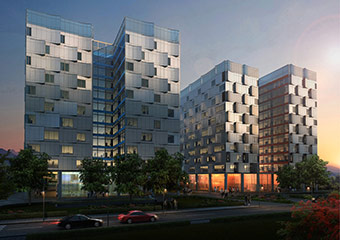 For architects of the 21st century, it is impossible to ignore the significance of building envelope design in most sizable projects. It is significant aesthetically as the primary visual element of the building, but more importantly it is essential in negotiating the transfer of energies between the exterior micro-climatic and interior comfort environments. In addition to aesthetic and environmental considerations, the building envelope design must also address pragmatic issues of maintenance and safety whilst responding to market conditions such as financial feasibility, constructability and material availability. Creative design resolutions for such variable parameters can thus become a complex exercise requiring a truly integrated design process often with a host of design and technical teams.

HUB-1 office building project in Bangalore is a great example of this integrated design process where the design is not only concerned with aesthetics, but also solves for environmental conditions, energy conservation, indoor thermal and visual comfort, constructability, maintenance issues and above all financial feasibility with the highly competitive developer commercial market.

As part of a 3.6 million sf SEZ development for Karle Infra Pvt. Ltd. on the northern edge of the city of Bangalore, Merge Studio was engaged to lead the design of its first two speculative office buildings. Two buildings, each comprising of roughly 360,000 sf are 85 meters long and 48 meters tall (G+12 floors) (fig.2). The ground floor lobby is a double height space with an internal street bisecting the building at ground level directly behind the lobby. With pre-defined massing based on its master plan, the façade quickly became one of the key features of the design exercise. From the outset, three essential goals were established for the facade design; high performance, timeless aesthetics and efficient constructability. 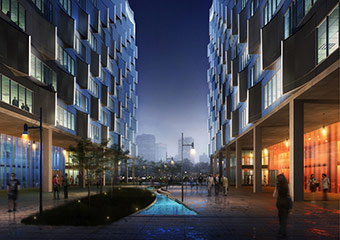 Merge studio led the collaboration of an international team of consultants between New York, Bangalore, Chennai and Mumbai to deliver design and documentation for the facade, external and internal public spaces including the public plaza, main lobby, internal street and shared amenities in addition to peer reviewing and coordinating the building core and utility spaces.

Understanding that the envelope is not merely an architectural and aesthetic expression, but a primary transitional element of energies between external and internal environments, the performative aspect of the envelope was set as a priority. Prior to any design proposal for the building, it was imperative to understand the local climatic conditions and desired internal comfort. In the climate of Bangalore, like many other cities in India (especially along similar latitude), direct solar gains becomes a major source of internal gains. Given Bangalore’s climate with predominantly cooling requirements and high internal occupant and equipment loads of an office building, it was important to minimize the external heat gains.

Another important goal was to achieve a maximum amount of natural daylight whilst minimizing glare. From prior studies and experiences, we know that 35-40% window wall ratio (WWR) is usually a sufficient to provide daylight in the occupied floor plates.

Our design studio took on the challenge and developed design strategies where aesthetic and performative design elements of the façade were essentially inseparable. 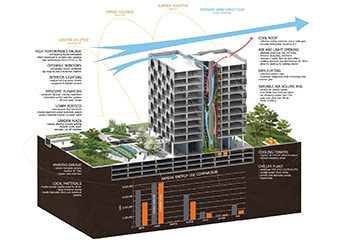 At HUB-1, this particular element is the ‘wave’, curving and gently peeling away from the façade surface. When placed in a staggered pattern on alternate floors, the ‘waves’ begin to create shadowed alcoves between them (fig. 6). The fenestration is then place strategically within these alcoves to benefit from its self-shading effect. Solar analysis of the façade design shows that on the southern façade the fenestration is shaded over 80% during summer months (from March through August). This has an impact on the reduction of energy consumption and further energy analysis found that 3-4% of energy saving was directly attributable to the self-shading design of the envelope. In addition to solar protection, operable windows are provided on the vertical (from the building envelope plane) surfaces of the waves. Although required for emergency smoke exhaust (as per city by-laws), the placement of vertical operable windows allow for potential natural ventilation during suitable climatic conditions.

What makes this envelope design really exciting is that while the ‘wave’ façade articulation contributes to the performance of the building, it is also aesthetically expressive. The ‘waves’ although static in their positions, create a continuously changing visually dynamic design.

The shadow patterns on the façade will change and respond to the sun’s altitude and azimuth location every hour of the day and every day of the year. The ‘static-dynamic’ skin thus creates a continuum of visual expressions for its occupants and visitors depending on the time of the day and the season. (fig. 8)With basic design in place, further analysis was done to understand the amount of incident solar radiation hitting various orientations and vertical locations on the skin. Varying levels of incident solar radiation across the building façade then inform varying WWRs. For example, the west façade of the building has limited fenestration with roughly 20-25% WWR whereas the lower floors on the north façade are maximized with roughly 40% WWR. Once again this altering performance strategy also becomes an aesthetic expression of the envelope. To further deter the impact of direct and indirect solar gains, high-performance low-E glazing has been used in the unitized curtain-wall system.

Whilst the design responds to various environmental analyses, it was also important to ensure its financial feasibility. A modular design approach not only prevented excessive fabrication and installation costs, but also created a simplified design to allow for unitized curtain wall construction and potentially faster construction. Each module consists of equal number of panels and fits between the structural column-grid of 10.8 meters. Within each module the only variation is opaque (aluminum) or transparent (DGU) panels. This eliminates any unique panels or systems thus making it financially viable for a core and shell speculative office building in a developer market.