An Office in a Green Oasis Bhartiya Centre of Information Technology, Bengaluru 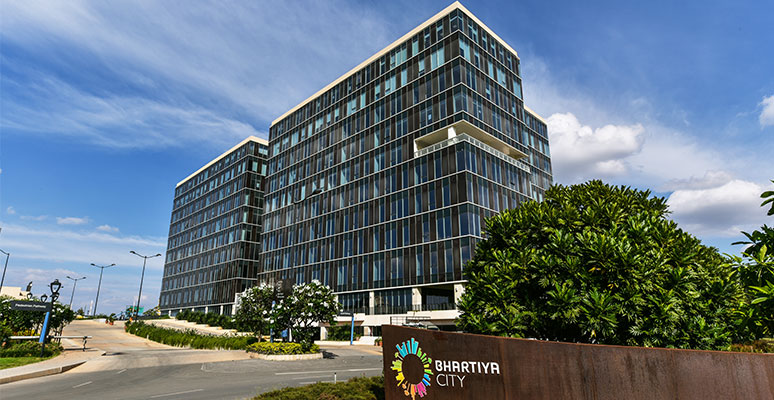 With Bengaluru becoming one of the fastest growing hubs for IT development in the past eight years, the 25-acre master plan for BCIT brings back the idea of the green oasis as a vital node of the Bhartiya City. Consisting of three towers arranged on the periphery of a 5-acre park, BCIT strives to bring the notion of ‘an office in a park’ to life. The three towers are also linked to each other at the podium level, which is free of any vehicular movement (except fire tender access) making it a haven for pedestrian connectivity and cultivating the idea of chance interactions and networking.

The IT Centre integrates itself with the larger scheme of the Bhartiya City through its centralised location, that allows the residents of the Bhartiya City to walk to work and enjoy a greater standard of living through reduced commute timings and consequently lowered environmental pollution.

Two towers of the master plan stand completed; of these, the first one is occupied with a LEED Gold rating, materialising the envisioned sustainable design. The Block 1 of BCIT consists of a G+9 tower, housing four saleable units on each floor. The office units are located around a central circulation and service core, allowing equal access to each workspace. The Block 2 has been designed as a G+13 tower, and Block 3 as G+18. The building floor plates are rectilinear, with their longer sides facing east- west in two buildings, and northsouth in one.

Facade Strategy At IT Centre :

A façade strategy utilising opaque and translucent panels articulated by vertical fins has been derived to optimise daylight penetration; a combination of fritting on the glass panels and tinted performance glass has been used to control heat gain from east and west, which also introduces dynamism in the façade appearance. The panel sizes have been configured to ensure maximum material savings, and run in sync with the structural grid.

The buildings have breaks introduced in the longer façades in order to reduce the net glazed surface – this also allows the centrally located core area to be ventilated and lit naturally, reducing the dependence on mechanical systems. The width of the blocks allows for maximum ingress of daylight at each floor, enabling natural lighting within the offices and reducing dependency on artificial lighting.

Refuge terraces have been introduced in the north and south façades, which can also be used as break-out zones for the offices, enhancing the user experience and allowing further daylight penetration. The façade strategy have helped facilitate minimal dependence on mechanical lighting, reducing the carbon footprint of the building – one among many green features of this LEED Gold-rated building.

Affordable and clean energy: The natural site slopes have been used to allow the first basement to be naturally ventilated in part, reducing the energy requirement of the building. Optimised circulation scheme: Within the tower, the office units are located around a central circulation and service core, allowing equal access to each workspace. At the broader schematic level, the common park is accessible to all and encourages interaction and socialisation among all users.

Landscaping Strategy for Promoting the Wellness :

The larger landscape zone between tower 3 and the first 2 towers has been carefully designed to incorporate sports courts to promote a healthy lifestyle, gathering spaces for interactions and knowledge sharing, and leisure spaces for unwinding and relaxation. The 25-acre master plan for the Bhartiya Centre for Information Technology consists of a 5-acre open space designed as a park, which act as the green lungs of the campus and promote wellness of the users.

Water Conservation at IT Centre :

Small water bodies within the landscape have been located after a study of the shade areas, to reduce evaporation. The water is sourced from the recycled STP water, ensuring selfsufficiency. Site paving of grass and concrete encourage percolation of surface run-off to the water table. 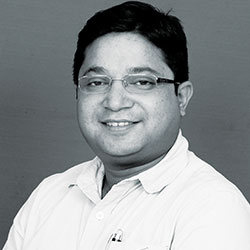 One of the Directors at Edifice, Manoj Choudhury has been a vital cog in the Edifice machine since 1999. He currently runs the healthcare and urban design verticals and also oversees business development. Manoj has previously helmed Edifice's Bangalore operations with great success, and has been crucial to Edifice's growth as a company as well as a team. Manoj has also built company's commercial development design vertical from scratch. He deems himself the eternal student, learning from everything that crosses his path and applying these lessons across projects and competencies. His portfolio of projects handled as a part of Edifice, spread across the healthcare, urban design and commercial development sectors, includes: AMRI Hospital in Bhubaneswar, Mother and Child Care Hospital at Kolkata, Asian Heart Institute at Mumbai, Wipro, Ascendas, Bhartiya City, Tata Realty, Mahindra World City in Jaipur & Chennai, and I.T.C. at Guntur.