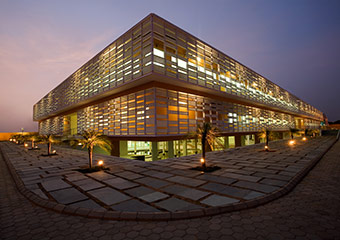 Located in a typical hot dry climate, 20 kilometers further from Jaipur, Pearl Academy of Fashion, boasts of a radical architecture that emerges from a fusion of the rich traditional building knowledge bank and cutting edge contemporary architecture.

Various passive environment control methods have been incorporated in the design to reduce the dependence on mechanical methods due to the inherent budgetary constraints and the need to combat the adverse climate. Adaptations of traditional Indo-Islamic architectural elements and passive cooling strategies such as open courtyards, water body, a step-well or baoli and jaalis (perforated stone screen) have been incorporated giving the building a distinct feel of ancient-modern confluence. 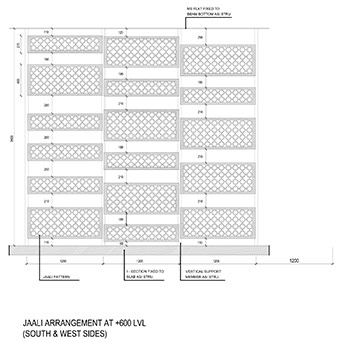 The building is protected from the environment by a double skin façade, which is derived from a traditional building element called the ‘Jaali’ that can be found in abundance in traditional Rajasthani architecture. The double skin acts as a thermal buffer between the building and the surroundings. The density of the perforated outer skin has been derived using computational shadow analysis based on orientation of the façades. The outer skin sits 4 feet away from the building and reduces the direct heat gain through fenestrations, yet allowing for diffused daylight. The jaali thus, serves the function of 3 filters- air, light, and privacy.

The scheme relies on self shading sliver courts to control the temperatures of internal spaces while allowing for sufficient day lighting inside studios and class rooms. 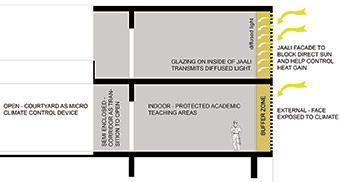 The materials used for construction are a mix of local stone, steel, glass, and concrete keeping in mind the climatic needs of the region while retaining the progressive design intent. Energy efficiency is a prime concern and the institute is 100% self sufficient in terms of captive power and water supply and promotes rain water harvesting and waste water re-cycling through the use of a sewage treatment plant. Besides having become a very successful model for cost effective passive architecture in desert regions the design and facilities of the campus complement the ideology of the Pearl Academy of Fashion – a cutting edge design institute with a sustainable approach. The Pearl Academy of Fashion is an exemplar of an inclusive architecture which intends to accommodate all the heritage values while positioning it within the contemporary cultural and architectural paradigm.