Building façade is one of the most vital pieces of design, which refers to the side, normally the front side of a building structure. It provides a great opportunity for designers and architects to play around and display their design skills and artistic talent. But a façade is more than just for show to the public.

The design of façades is highly complex, at the same time extremely important in determining the success of a building. The façade does not only integrate with architectural context, but also play a key role in the building performance. In theory, a façade designer has to strike a balance between visual and thermal performance of the façade, which plays an important role in energy consumption and thermal comfort of the occupants inside the building.

Façades are not only designed for their aesthetic reasons, but there are also several factors that need consideration such as types of materials and their durability, ease of installation and maintenance, cost factor, resistance to corrosion and other chemicals are some of the common considerations that goes into an effective façade design and implementation. That being said, the important aspect of the façade is that it adds value to both the efficiency and aesthetic of the façade is the façade lighting. In high rise buildings, façades are of significance mainly because they impact the thermal comfort temperature of the insides.

The Right Façade Lighting is not About Intensity, but Functionality

“Technically speaking, the light efficient façade – or building envelope that adapts to environmental light conditions – dates back to the first window. But the contemporary idea of the façade has only been around for a few short decades.

Energy producing algae face, light responsive façades, smog-eating façades, operable skin façades, etc. are some of the innovative façades that are gaining prominence. These façades become particularly important when a large part of the building is covered by it,” says Juzer Kothari, Managing Director, Conserve Consultants Pvt Ltd, a specialist in Building Sustainability.

The lighting draws attention to the textures, colours and forms of space, helping the architect to achieve the true purpose of his or her design. As it’s been said, vision is the single most important sense through which we enjoy architecture, and lighting enhances the way we perceive architecture even more. In recent years, façade design has been the signature of famous architect firms, who want to leave a mark through their unconventional façade design that stands out, and lighting is one such aspect that is helping them to bring out their uniqueness.

A Good Façade Lighting should have the Following Key Aspects such as:
1. Aesthetic
2. Function
3. Efficiency

As the whole concept of façade lighting is to add value to the design, it is only evident that aesthetic forms a major aspect of façade lighting. The aesthetics is where designers and architects focus on the emotional impact that it will have on the occupants. It also determines how the occupants feel when they walk around the space. Aesthetics have become an important crowd-pulling aspect for retail locations, where the consumers are owed through the design and lighting of the façade.

Though aesthetic comes as a natural requirement of façade lighting, the less known aspect of its function is the most important factor in the façade lighting. Lighting has mixed-use and we all want it to look a certain way, but also want to ensure that it serves its most important purpose, in this case, the illumination of the building and create visibility.

Research studies suggest that lighting has a high index of disrupting the thermal comfort of the occupants. If it goes higher than the expected level, or lower than it, it creates a strain on visibility, causing migraine among the occupants. Hence, the optimum façade lighting should ensure proper illumination that makes occupants feel soothing to see the entire building. They should also bring out the difference in design or structure in the façade.

In the age of green and sustainable buildings, façades have gained more prominence in ensuring the sustainability index of the entire building. One aspect is to create a breathtaking façade lighting, entirely another one is to create a breathtaking layout that is also incredibly energy efficient. This can be done assuring that the majority of the light is reaching its target and there is less wastage of light. Reducing the amount of wasted light will make the façade more efficient.

It was soon enough, that we saw that façade design has transformed from being exterior membrane to an intelligent skin that interacts with the building interiors and also the outer public spaces using embedded LEDs and customer designed software, most of all powered completely by solar energy. These façades show us a glimpse of what is the extended role of façades in the future. From being a protective layer of the building to the reflection of its character.

GreenPix Media Wall is a groundbreaking concept in façade lighting, that integrates sustainability and digital technology, and forms a communication channel to the audience. It features the largest colour light-emitting diode (LED) of 2292 LEDs to form the illuminated curtain wall, comprising an approximately 2000 Sq m of interactive skin and are integrated with photovoltaic systems for power generation in a sustainable way. The façade wall is over 60m, which is the largest in the world, and covers of 10-storey building.

The GreenPix Media Wall stands as a testament of how façade lighting stands at the juncture of sustainability and aesthetic by striking a great balance between the two. The wall by itself has a self-sustaining energy life-cycle, harvesting enough sunlight for its operation, making it one of the most energy-efficient LED displays in the world.

The MGM Hospital is a 400- bed state-of-the-art medical institution in Chennai. It will be the first hospital in India to qualify for LEED (Leader in Energy and Environmental Design) Certification. The health care facility has 10 operation theatres and 100 critical care beds, making it one of the largest hospitals in India.

Being an ambitious project as it is, the façade in the project plays an important role in ensuring that the hospital’s vision and its operational efficiency are in balance with each other. The façade design by MGM is inspired to create soothing illumination from the exterior.

With the support of the lighting consultant, various simulations were done to arrive at the perfect hue and saturation required to create a required illumination. MGM stands as one of the very good examples of how façade design and lighting complement towards each other, and together they uplift the outlook of the building.

Under the Façade Lighting, the Tuft in the Façades is More Prominent and Bring out the Moods of the Building

Palladium inside Phoenix Market City is arguably the most beautiful façade design in Chennai. Palladium is one of the unique luxury destinations in south India, which over 75 international brands such as Canali, Michael Kors, Coach, Hugo Boss, etc. Spread over 2.5 lakh sq ft of the luxury shopping experience, Palladium intent to convey the message in the market through its unique façade design and lighting.

The façade design & lighting is inspired by tufting on Chanel Bag, which is a very recognizable design of the brand. LED lighting was attached with each tuft formation, leading to a synchronized flow of color patterns, that reflect the moods of the building. By weaving the façade design around the tuft, Palladium is able to connect its outlook with the luxury shopping experience. 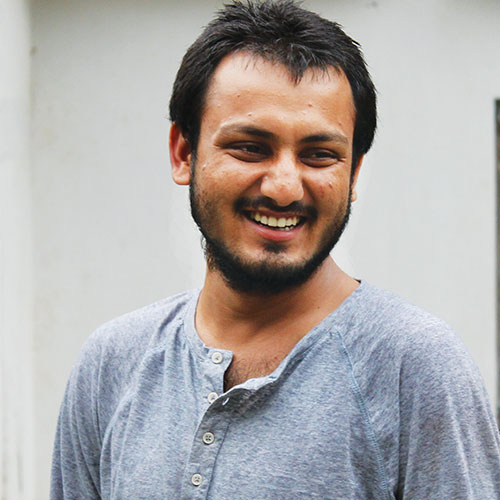 Abdul Moeed Chaudhary completed post-graduation in M Tech Building Energy Performance from CEPT University. During M Tech study, he did a comprehensive analysis of passive design strategy, HVAC, lighting, day lighting and energy simulation and also did research on lighting retrofit and visual comfort. In the same research, he presented a paper in the research conference (FARU 2017) at Colombo, Srilanka. Currently, Abdul Moeed Chaudhary is working with Conserve Consultants Pvt. Ltd. as a Senior Engineer in Consulting Team (Mumbai) for business development and project management in the field of sustainable design. Previously, he has worked with Terraviridis Environmental Design Consultancy as a building energy analyst and performed energy simulation, lighting and day lighting simulation. He also writes poetry and dialogue.