FAÇADE LIGHTING – An artistic edge to the building architecure

Internationally, the trend of façade lighting is catching up fast. the number of buildings that have illuminated façades is increasing sharply. People find the nightscapes around them created by illuminated building façades. These façades facilitate orientation, convey messages, communicate emotions and create attention. Illuminated building façade creates an added value to the building and has an architectural and economic merit by making the location more beautiful. It shows off the building in a right light, literally, and brings across a positive corporate image. However, pertaining to architectural, social and technological changes, lighting design demands an enormous aesthetic sensibility as well as a knack to overcome sustainabilty challenges. Façade lighting solutions along with each one of building component is expected to be sustainable, save resources, be energy efficient and prevent unnecessary light pollution.
All lighting entails increased expenditure on energy. Light that is not properly directed onto a façade is perceived as distracting and an unnecessary waste of light. The ultimate goal is obtaining the best possible efficiency from lighting facades.

One such project, where façade illumination created a landmark in the Indian Façade space is MONDEAL SQUARE – a G+11 twin tower commercial building in the fast developing town of Ahmedabad, Gujarat. The project also happens to have integrated the largest integrated lighting system into building façade in India.

Conceptualised by Architects Blocher&Blocher, the fifth dimension to the project was given by the lighting consultants Marie Ikram Bouhlel and Nirmit Jhaveri from Atelierdada in the form of fantastic façade illumination. Glasswall Systems, Mumbai, converted the concept to reality by executing the façade in most precise manner and achieving the beautiful lighting effects adorning the building façade. The physical impact that the building makes, exceeds the expectation of even most creative of the artists. Lighting on facade  accentuates the architecture and impressively emphasizes on buidling design. The high-contrast interplay between light and shadow increases overall vividness. Dynamic light effects reflect the identity and leave a lasting impression.

“for Mondeal Square, lighting on façade is designed through an algorithmic application that interacts with users and time.Different animations are played differently during the working week, the weekend and various festivals celebrated in India” – says Marie Ikram Bouhlel from Atelierdada.

She further adds, “For the day effects and along the five hours previewed for the night illumination, sun shades at various segments of the building will shine periodically for five minutes at each hour’s start, simulating a precious stone’s facets under the sunlight.For each hour’s start there is a different video animation that links it with its respective hour. This lighting design solution allows a significant energy saving by a simple interplay between the on and off cycles.For a fresh start of the working week, on Sunday, a more agile and colourful play of shadow dance is designed.”

For special events, the building participates in the celebration by changing its lighting scheme. 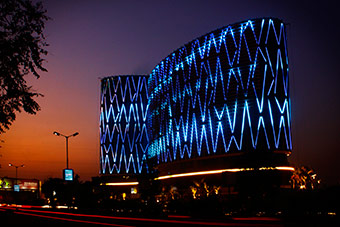 “At Mondeal Square, it was a very joyful experience all the way from the first meetings, testing, and the final installation. Probably the most satisfactory experience was when we saw people stopping the cars on the road to see the play of shadows on the façade during the recent Navratri festival” – Kamlesh Choudhari, Glasswall Systems

Mondeal Square project in Ahmedabad, together with Glasswall Systems, Atelierdada and Blocher&Blocher architects has marked a new era in façade technology in India. Use of LED in lighting façades is becoming more and more popular as technology develops and more and more clients/developers are willing to explore the various opportunities to have a beautiful impact on urban nightscape through their buildings.

Technology always enables one to create most dynamic of the buildings by giving newer and more advanced tools. Façade lighghting is one such technological advancement that is sketching a fine painting on the canvas of urban development. Inspired by and expressing the message of the building architecture in itself, façade illumination is increasingly being used as a means of artistic rendering. 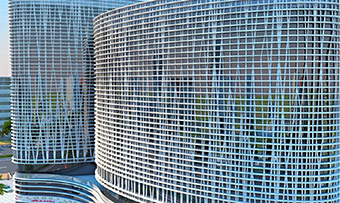