The buildings we live and work in should provide user comfort, reduce energy consumption, and act as a safe haven for us and our loved ones. When there is too much focus on a building’s aesthetics, we tend to ignore the technology that is available today, which allows us to harness energy for our daily needs. A simple example of this is the integration of solar cells into curtain walls or façade system.  Although retrofitting an existing building with photovoltaic cells (PV Cells) would be time-consuming and costly, integrating PV cells into the façade of a new building would be much easier and should be considered at the design stage.

With so many technologies that can be implemented, we could innovate to the point of calling a façade a smart façade if it uses natural, renewable energy sources such as solar radiation, airflow, and geothermal energy. This could meet the building’s energy needs with respect to heating, cooling, ventilation, and lighting. However, all such designs must go through a series of evaluation processes to ensure their performance parameters are not compromised while making them user friendly, energy-saving, and sustainable.

The process of selecting and finalising a complying system involves multiple steps, including extensive research and design of the mock-up; evaluation of the design against performance parameters; approvals; and then finally, the execution of the approved design of the project.

A building’s design often focuses on its external appearance and ‘wow factor.’ But to ensure the design complies with all other factors that make it safe and environmentally friendly, the design ideas should be based on tested evidence. Rather than only prioritising the aesthetics of the building, it is important to look at other demands on the building envelope: it has to protect against rain, weather, fire, and burglary, while simultaneously regulating light and ventilation, and providing solar protection, and minimising the effects of cold and heat.

Designing a building without considering these factors would be difficult for the project consultant and the manufacturer to run the materials or systems through bespoke tests, which evaluate their performance to resist the effects of naturally occurring physical phenomena. The project consultant/manufacturer, in conjunction with the testing laboratory, would sketch the mock-up for the system that would most closely imitate the system design as per project conditions.

A design that just closely resembles the one on the project would only give an assumptive number to the performance of the overall system at the site. As such, the mock-up design would need extensive study about the build-up of the façade; materials used; variations in the build-up throughout the façade system; and different architectural details that are projecting away from the façade, which could probably act adversely when it comes to the performance of the façade on site.

For instance, the same EPDM gasket, which was neglected, could be overused on a system to protect the façade design from allowing water or air leakage. And the same overused EPDM would create a huge impact in terms of the façade’s fire performance or its reaction to fire. Hence a design that would create a balance among all the required performance parameters should be the main goal of the team designing the mock-up.

A mock-up should comply with a few important factors:

• The designed mock-up should replicate the worst-performing design of the overall system, based on the project. • It should aim to accommodate all components in the build-up of the system as a present on the project.

• It should also be fabricated/installed using the same material as would be used on the project. Any grade, alloy number, material finish, etc. should match the material to be used on the mock-up as well.

A well-designed mock-up system would most closely resemble the performance parameters of the system.

Once the mock-up design has been finalised, the next task is to evaluate the mock-up for various parameters of potential naturally occurring, physical phenomena. There are several laboratories around the globe that are well-equipped with the infrastructure to conduct such physical tests. The Al Futtaim Element Materials Technology Dubai LLC (AFE) has the capacity to accommodate several standards and bespoke designed cladding systems to evaluate their performance to fire and non-fire testing methods.

AFE can support the evaluation of the façade system with accredited tests, such as:

AFE also has three fire test rigs, of which two are for BS 8414 part 2 and one is for BS 8414 part 1. All three rigs are accredited for the current 2020 version of the standards by UKAS. The BS 8414 rigs are capable of accommodating cladding systems with larger cavity sizes, allowing customers to test the most onerous conditions of their system, which provides them with a wider range of compliance through certification or assessment of the system. The laboratory’s recent addition to the fire propagation testing scope is the NFPA 285. It is accredited by IAS to conduct fire tests of façade systems to NFPA 285 as of September 2020.

A system that cleared the evaluation phase would have undergone several trial tests to various performance parameters. This is when the manufacturer/project consultant would find out the number of variations they have to make to their initial design in order to conform to the design that has cleared the evaluation phase, and has met the performance criteria required in the standard(s). This brings into light the importance of evaluating a façade system prior to initiating the fabrication, or even in the worst case, installation of the system on-site. We see a lot of projects where the façade material/system is selected for a project without a proper evaluation of the system to the performance parameters and instead look at the product qualification and certifications.

What they miss out here is a quantified answer to how these products would behave when assembled into a system. How would the system behave in the presence of non-material aspects in the system? And without this vital information, proceeding with the fabrication or installation of the system on-site could invite a variety of problems that would cost the project time and money.

Now that the system is evaluated and is proven to clear all intended performance parameters, the ball is with the installers of the cladding system. Despite the efforts taken by several teams to design the mock-up and evaluate its performance, the installation or execution of the system on-site plays an important role in ensuring the desired outcome is achieved. To ensure there is no miscommunication between the input given to the installers and the outcome we receive, there must be proper training and practical educational sessions provided for them to be aware of the critical aspects of the façade system. Education is one of the key factors of success. 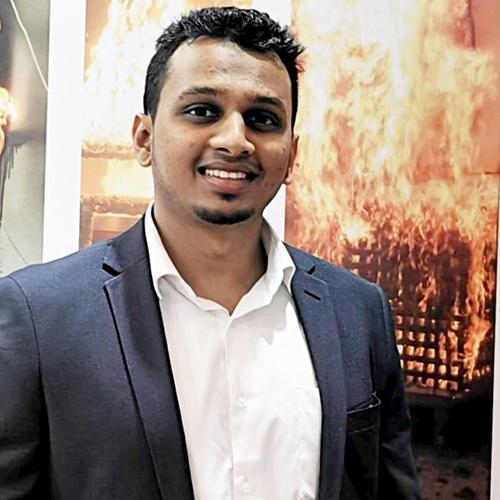 Fawaz Hashim graduated as a mechanical engineer in 2012 and currently leads the technical team at Al Futtaim Element Materials Technology, Dubai. The company is under the Element Materials Technology group that delivers a comprehensive range of testing, inspection, and certification services to the global aerospace, transportation, fire, oil & gas and infrastructure sectors. Apart from being an associate member of the Institution of Fire Engineers from the UK, Fawaz is an active participant with ASTM’s E05 committees on fire and also participates at the European Group of Organisations for Fire Testing, Inspection and Certification (EGOLF).