Facades of the Future Samskruti

Poonam Verma Mascaren has is an architect, a conservationist and an environ-activist, with a keen interest in traditional architecture. She is engaged in unravelling and reviving the inherent wisdom of traditional building technology as she believes traditional buildings offer a generically green option. Her Goa-based, award winning firm Archinova_Environs has climate and context-sensitive architecture as its corner stone. Their Project Samskruti Hoysala boutique apartments -has been awarded -‘Best Green Building Project of the Year 2014’ at Worldwide Achievers Real-estate Awards, ‘Best Luxury Property 2015’ at the Global Quality Awards forum, ‘Best Concept and Architecture Award for 2014-15’ at National Real Estate Awards, and Vishwakarma Best Residential Project of the year 2015 by CIDC. An architect and a post-graduate from University of York, U.K. (Charles Wallace Fellow) in Conservation of Buildings, Poonam has over 24 years of work experience in building with alternative technologies at Auroville; Conservation and development of 22 government-owned heritage buildings at Jaipur- Amber and couple of privately owned palaces along with revival of several old houses at Goa.

By 2030, five billion people (60 per cent of the global population) will live in cities and four-fifths of these urban dwellers will be in the developing world. The thrust on developing more number of cities by the current government of India has its foundation in the economics of cities.Increased urbanization often correlates to higher national incomes (GDP), as the availability and consumption go together and increase in demand within urban areas fuels the consumption be it vehicles and TVs and Fridges or the eateries and the malls.

In recent past, air pollution of Delhi made international headlines and lately-water contamination of Bangalore lakes has the social media abuzz. EU even sent directives to its employees living in Delhi to use air purifiers in each of their offices and homes! But is that the answer to the burgeoning problem? The flip side to the above mentioned scenario – and one much touted by the politicians- is that globally India is insignificant contributor to the global CO2 emissions. This indicates that while collectively our (or perhaps limited) Industries are better monitored – it is our lapse in domestic waste management and lack of efficient public transport systems that are exacerbating the pollution in our living environment in urban context. Believing that we need a different approach to our day to –day living– a thematic concept was evolved while undertaking the multi-dwelling project in Bangalore for the developers- Samskruti Builders.

Samskruti Hoysala Boutique Apartments(50 units):Climate Responsive and Energy Efficient Habitat, in both resources and functionality, employing appropriate materials and technology for secure and contemporary comfort living that is rooted in the local context while being interactive within and without for a wholesome experience of blissful coexistence with NATURE and its bounty. A smart community living that has the inbuilt possibility of experiencing responsible co-existence, nodal connectivity, social cohesion, ecological sensitization and a participatory living. Our aim is to facilitate a generically green-comfort living-through designed indoor and

outdoor – spaces that cater to the present needs with MINDFULNESS FOR THE FUTURE through eco-responsiveness.

The resultant conceptualized building took a year and half as is in visual.Taking cognizance of the salubrious Bangalore climate- a list of key decisions were framed for developing the design: No air conditioning; one tree for each apartment; plant growing bed -for each family; day-lit each space; cross ventilation; community kitchen garden; community recreational spaces; water self sufficiency; drinking water in each tap; 24 hour hot water at each point by solar; solar lighting for common areas; consumption billing of water and electricity.

Primarily the plan(03) is a courtyard (04) flanged by building blocks on the South,East, and North end and open on the West. This U shaped form, Ground plus four building block- has courtyard that remains in shade(05)at most times of the day resulting in cooling of air before entering the building from the south west- the prevailing summer wind direction. High foliage planting in courtyard will also result in humidification. The glazed- floor to slab fenestration on the outer edge (06) and smaller openings in the inner skin results in better draft of the air. Light wells have been created by the bridge like corridors that also give each apartment a distinct sense of entrance while ensuring cross ventilation and creation of upward draft.

The primary feature of the detailing and design is in the façade and fenestration (07) design of the building. The decision of one tree planter and a planting bed for each apartment led to designing of three level recessed façade. The outer edge of the cantilevered terraces (08) has trees and 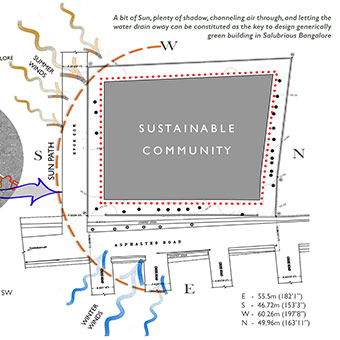 planters followed by sitting paved space which abuts the corridor that has floor to slab aluminum and glass- sliding- wall to wall doors. The decisions were based in our understanding that trees and vegetation are the best generic solution for trapping CO and also for mitigating sounds from streets while imparting a positive feeling of well-being to the residents as they discharge more negative ions in atmosphere and also add oxygen to the ambient air besides the visual benefits of colours and fragrance that plants bring to our environment.

The recessed glazing (windows 09, 10) is also a conscious decision to ensure reduced heat gain through the glass by virtue of shading. Resultant reduced reflective heat results in minor addition to the ambient air temperature which in turn will be mitigated by the presence of trees and shrubs. The covered passage acts as buffer between open to sky terraces and rooms – to allow the residents to enjoy also the rains.

The single idea of one tree for each apartment led to creation of staggered terraces (11) to allow double height availability for their appropriate growth. The modular grid system that was conceptualized ensured a rhythm for the stagger. Resultantly, no two apartments are same on one floor and only alternate floors have some similarity.The building works as a unit while at the same time offers individuality of a home to the apartment owner.

The roof terrace is conceived as the community food growing space and also the recreational zone. Hydroponics, planter beds of varying depths, solar PV roofed Green house for seedling and hydroponics, community kitchen and storage, are all planned for the roof terrace making it technically an important level as well as socially most relevant. Resultantly- the heat gain through roof too is minimized.

Choice of Glass for the Façade

The most significant part of the façade is the design of fenestration and choice of glass. (12) The design was undertaken to ensure operable windows even within the floor to slab sliding glazing situation to ensure nigh-time cross ventilation- lack of which often necessitates the use of air-conditioners. The simulation for selection of glass gave us an interesting insight. The simulations considered the glazing on each of the façades primarily as curtain walls with some cognizance of1m balcony and sunshade device BUT not for the staggered terraces and thus does not compensate for the shade of the same. The resultant chart still gave us good ratings as can be seen in the accompanying slides.

This has reinforced our own understanding of the design principles and we were able to confidently subscribe to the lower rating glass (for better economy) than the one recommended by the simulation (13).

A low mirror coating glass was chosen for the courtyard windows to allow for privacy without the curtains during day time which in turn results in saving of electricity as ample day light is ensured in all spaces. The coating level was chosen to ensure minimum distortion of the outside atmosphere. (14)

While executing the building fenestration details- it became evident that the global companies may not always be willing to supply the extrusions as requisite by the design. We had to terminate the contract of a company and look for another which was willing to go the extra mile. This tested the commitment of the developer and the designers and lesson here is that too much is at stake to be giving into limitations as may be presented by the market. WE have to demand the appropriate solutions to our climatic needs from the global building material players and NOT be shortchanged by them.

For security, motion detectors have been employed and many other technological inputs will ensure smart performance and real time data recordings for the building.

The idea that only sensitized humans will ensure continuity of the planet is the intangible strength of this project and in time to come – we shall also have an understanding of the success of the belief that guided the design. Suffice to say- that in the increasingly aware world, this sentiment is being echoed around the world.

While Bangalore offered a salubrious climatic context for Samkruti Hoysala project; KMC building Hyderabad by RMA architects (15) is another example of sensitized clientele and designers with its interspersed glazing on surface and a skin of plants providing the required shade to the glazed edge while adding positively to the ambiance and performance- both of the building and its users.

Another contextually relevant example is the recently completed Triburg Head Quarters by SPA Design at Gurgaon (16) wherein the response to tropical climate by use of courtyards, recessed terraces, terrace gardens, glazed and solid facades to generate a scale and ensuring operable smaller windows within a tall glazed façade is a definite step forward in employment of aluminum and glass in facades within the climatic context of Asia being smaller openings(expansion of air lowers its temperature), shade, shadow and channeling of air flow with roofs as gardens to combat the heat gain while helping the ambient air to be cleaner and humidified.

Preferred future in Indian Urban context is hinged on an urgent paradigm shift from curtain glazing to isolate and then condition the inner atmosphere to recessed glazing, shades and shadows with added generically greening of outer skins to combat the declining air quality and by engaging in Climate Responsive Building Design principles as are amply demonstrated in our traditionally built buildings for minimizing the heat sink.

Our collective future is hinged on our collective sharing of responsibility for both: consumption of the resources as well as management of the waste. Segregation at source, recycle, reduce and up-cycle recipes are in our midst for adoption as a principle. Continuing technological advancement for management of water is amply available. An aware and willing participatory citizenry is the only way that can assure us a healthy future. Literally!