Fluid forms enmeshed together in parts and emerging from each other in parts constitute this small building. Within an extremely small plot measuring only 1300 sq m, a mixed use building programme based on the client’s needs had to be adhered to.

Worldwide, most public buildings for arts are created on large parcels of land with large built up areas allowing for generous circulation spaces, large gallery spaces are mostly planned in one or two levels, most on plots of area over 8000 Sq m.

On this small plot of only 1300 Sq m. in an upcoming business hub in Mumbai, we faced the daunting task of creating two art gallery spaces, an auditorium and a cafeteria within only 1000 sq m in addition to another 1000 sq m of office space, that will generate funds for the art society to be run as a social organization promoting the arts. With an available floor area at each level of only 450 sq m within which vertical circulation had to be separately provided for both the art society facilities and the office area, the art facilities are spread over three levels.

To allow the internal spaces to be perceived as larger, curvilinear walls fluidly demarcate spaces at each individual level and across the three levels, with small voids that provide visual integration. This language is carried through from the inside to the outside with undulating walls across the horizontal and vertical planes, creating a sculptural form for the art spaces from which a small office block rises above as a separate entity, yet integrated into the lower volumes.

The cafeteria is located on the northern side,overlooking an open exhibition ground and is provided with a small north-facing terrace space, usable through the day, as it is not exposed to direct sunlight. Although the spaces seem small in plan, they are visually perceived as being larger due to the seamless integration of walls and ceilings, and the fluid spaces created increase depth.

Fluid spaces across the three lower levels house the art gallery spaces and their allied functions with walls flowing into roofs homogenously. The fluidity of form seen externally, with a concrete skin encapsulating spaces while undulating on both the horizontal and vertical planes, is carried through to the interior volumes making the entire experience as that of moving through a sculpture.

A separate entrance lobby at the rear corner leads one up vertically onto the fourth level, the office space, which is angled to allow the offices unrestricted views of the sea in the distance. The office spaces are encapsulated above with floor to ceiling glass panels in the direction of the sea. The office block is perched 6 m. above the gallery spaces allowing the art galleries to be sky lit. Thus within this small 1300 Sq m plot, two distinct sets of spaces are created, each with its own discernible identity, and yet enmeshed together to create a uniquely sculptural building. 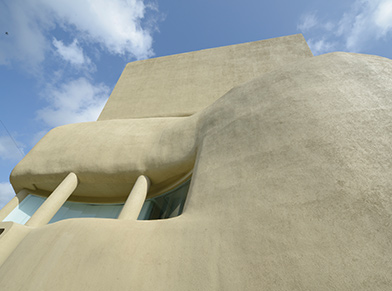 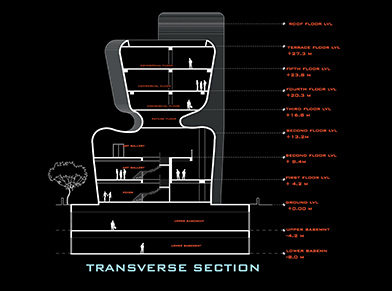 Located in the city of Jaipur in India which has a desert climate with average temperatures ranging from 30oC to 50oC through most of the year. The building is designed in response to the excessive heat imbibing traditional elements. A glass reinforced concrete screen that takes its inspiration from the old traditional ‘jali’ screens of the architectural heritage of the region sheaths the building on all sides further reducing the heat gain and rendering the building very energy efficient. The concrete screens around the building are supported by a steel framework with projections that vary from 0.9 to 1.5m . This creates an external periphery space for plants at each level that will act as further insulation from the external heat creating cooler office spaces within.

Built on a small plot of 1075 sq m, the building envelope is restricted on all sides in plan as well as governed by height restrictions. The office building overcomes the restrictions of its small plot creating office spaces that are very energy efficient to combat the excessive summers of its location while imbibing tradition in an abstract manifestation to create a sculptural quality for its inhabitants. Designed as a corporate office headquarters, the ground level houses a reception and conference rooms above a car parking basement and office areas in the next 5 levels. 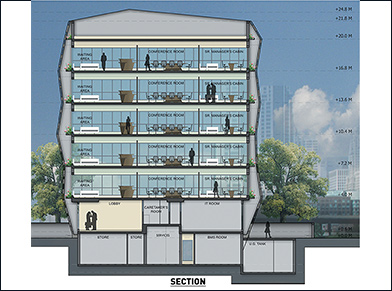 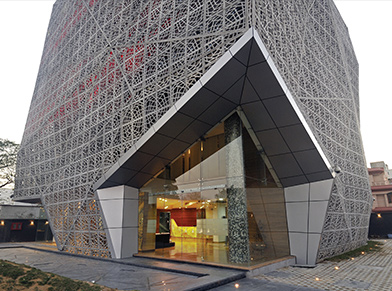 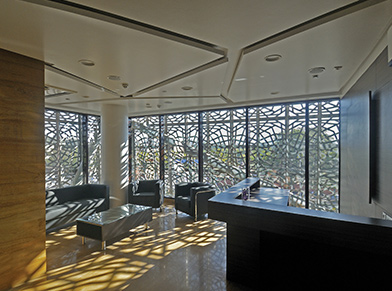 Built on a small plot of 1075 sq m, the building envelope is restricted on all sides in plan as well as governed by height restrictions. The office building overcomes the restrictions of its small plot creating office spaces that are very energy efficient to combat the excessive summers of its location while imbibing tradition in an abstract manifestation to create a sculptural quality for its inhabitants. Designed as a corporate office headquarters, the ground level houses a reception and conference rooms above a car parking basement and office areas in the next 5 levels.

R’World16 is a 5 cinema cineplex at Gandhinagar built on an extremely restricted site. To reduce the heat gain into the building in a climate that has average annual temperatures in excess of 35°C, the entire building envelope is constituted of glass reinforced concrete panels that are faceted and are 600mm deep. These panels are created in a rectilinear composition with varying sizes to form a collage. The building had to be built in a pre-determined footprint and no permissible deviations in length, width or height were allowed. A 4-level building is designed with the 3 lower levels housing small retail spaces and the 4th level housing a 5 cinema cineplex.

The retail spaces follow a simple rectilinear grid that echoes the grid planning of the entire city of Gandhinagar. Vertical movement spaces punctuate the centre of the building acting as the focal town square within the built form with smaller streets radiating outwards from it to the small retail spaces as required by the clients at each level. The interstitial spaces created by the hollow panels serve to reduce the heat gain into the internal spaces while simultaneously sheltering the window openings from direct glare. The composition of these exterior panels is imbibed within the interior spaces in the central lobbies at each level and the cineplex waiting lobby at the 4th level integrating the exterior to the interior spaces. The building design creates an energy efficient building with a sculptural presence. 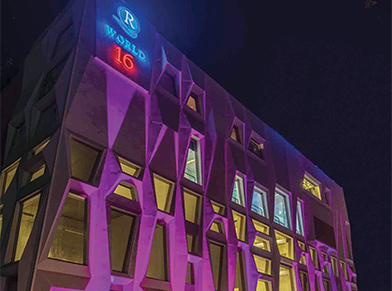 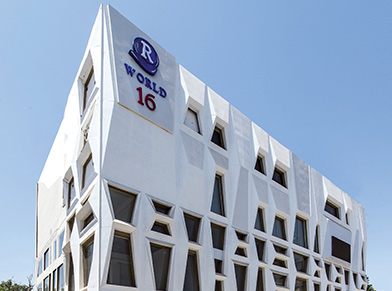 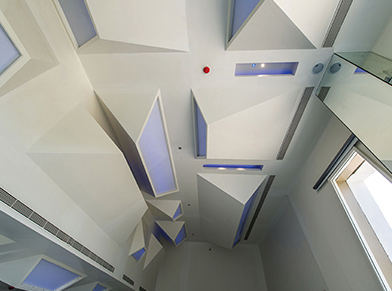 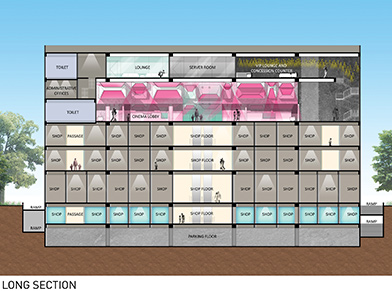