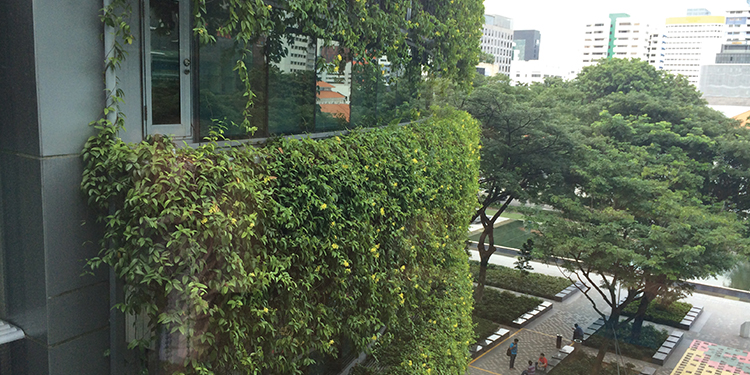 Green” seems to be the buzzword these days. All building components need to conform to green design principles, and the façade is no exception. The building envelope falls under heavy scrutiny, as it is generally seen, often justifiably, as a very significant element in the design of a green building. In fact, this is recognised by the majority of green building rating systems (LEED®, Greenmark, BREEAM, etc.).

But prior to delving into the subject of whether it is possible to design and build a green façade, the first question to tackle is what is meant by “green façade”. The term can be taken literally as referring to a façade that includes an element of greenery, such as plants that creeping up the façade or large planters running along the building envelope. While these strategies help provide a pleasant natural appearance to the buildings, allowing them to blend within their environment to some extent, and also provide some well-needed relief from the heat, they do not do justice to the lterm “green buildings”. The depth and breadth of strategies that can be deployed on buildings so as to help minimise their environmental impact goes well beyond just greening the façades.

The scope of green façades involves a variety of aspects. On the one hand, these could include improving the environmental performance of the façades, such as limiting solar heat gain or losses (depending on the building location), allowing natural daylight into the building so as to minimise the need for artificial lighting, minimising the risk of glare so as to reduce the risk of visual discomfort for building occupants, reducing sound transmission so as to minimise acoustic discomfort, preventing or reducing air flow through the façade (convection) so as to improve indoor air quality (IAQ) and minimise heat gain or loss, and more. On the other hand, developing environment-friendly building envelopes could also mean adopting systems or materials that have a limited or even positive impact on the environment, such as deploying energy-generating features (building integrated photo-voltaic panels, roof-mounted panels, silicon-less thin-film coatings, etc.). Sel fcleaning materials help to minimise the need for water and chemicals to maintain the façade. Usage of recycled or reused materials minimizes carbon-footprint. Sourcing materials locally or regionally also help to reduce carbon footprint by minimising transportation-related energy use. Optimising panel modulations will help reduce or eliminate wastage.

There are several important notions that designers need to understand or at solar heat gain coefficient (SHGC). The lower the SHGC, the better the glass performance (less heat penetration). Traditionally, a variety of strategies has been adopted to control or reduce the amount of radiated heat entering the building. One option consists in using glass with a lower SHGC. In order to reduce this value without at the same reducing visible light transmission, low-emissivity (low-e) glass with ever-increasing light-to-solar gain ratios (LSG). Currently, the highest available LSG is in the range of 2.0 to 2.5, which,simply put, means that up to 2.5 times more light than heat is allowed to penetrate the building.

The development of higher performance low-e coating, after 10 years of continued progress, seems to be plateauing off, as adding more and more silver layers will result in glass that is simply too dark to be acceptable. The development of thin-film or nano-coatings using a different chemistry to that of traditional low-e coatings seems promising, but commercially-available products currently fall short of expectations, but this should change in the months and years to come thanks to intense research efforts. Another strategy consists in providing external shading devices. Often, these comprise of vertical or horizontal elements, of varying density or opacity, while these can provide extremely useful at certain times of the day, there are times (early morning or late afternoon) where they are utterly useless. A possible approach that is more sensible would be to turn to vernacular approaches to solar protection. For instance in the Middle Eastern tradition, windows are typically placed high above floor level (lower-window-to-wall ratio), are set deep into the surrounding walls, and are oriented such that the light coming in is channelled towards the ceiling.

This has the double advantage of offering excellent protection against solar radiation, while at the same time allowing sufficient light into the building that the use of artificial light becomes redundant for extended periods of time. This is a demonstration of how simple passive strategies can outperform active automated solutions. With the right strategy and when taking a holistic look at all factors, glazed façades can be designed to exhibit exceptional performance.

While glazed façades have been the target of much of criticism, other components of the building envelope have often received little or insufficient attention. In fact, other systems or materials should fall under even greater scrutiny. For instance, solid RC or brick walls store up heat during the day, when subjected to solar radiation, and release this heat to the interior for several hours after. Yet, it is fairly rare to see insulated walls in this region. A simple layer of rockwool or other insulation would be sufficient to counter this effect. New generation paints have also been developed, reflecting heat to the outside. Even without going to this extent, simply selecting a pale shade of paint helps minimise heat absorption.

Similarly, the framing system for windows and curtain walls is largely ignored, in particular in Overall Thermal Transfer Value (OTTV)/ Envelope thermal transfer value (ETTV) computations. This is a rather crude omission, since the frames consist of aluminium or steel members, which are notoriously apt at conducting heat. Frames can represent up to 10 percent (sometimes even more) of the total façade area. Therefore, they should be taken into account when looking at the overall thermal performance of the façade. This factor is built into the building design of some countries (e.g. Part L of building regulations in the UK, Part J of the Building Code of Australia).

An on-going study by the SERIS at NUS (Solar Energy Research Institute of Singapore) is looking into the amount of re-radiated heat from window frames to the interior of buildings. Preliminary results are showing the substantial benefits derived from adopting thermally-broken frames, as opposed to the current belief that this has only a limited impact. Effectively, non-thermally-broken frames act like a series of radiators. Once validated, this study could outline the need to review the current guidelines for the assessment of heat loading through the façade in the region, and the importance of adopting thermally-broken frames so as to avoid underestimating the amount of heat entering the building, and minimise the risk of discomfort for building occupants who work or live near the building envelope.

Since it takes energy to produce façades, as well as to cool (or heat) buildings as a consequence of the façade performance, it is logical to look into how this energy can be offset through energy generation by the façade. Building-integrated photo-voltaic panels have been used in Singapore and the region for over 10 years. Yet, it is unclear whether the amount of energy that can be produced by these panels justifies the expense. In the tropics, and particularly in Singapore which is very close to the Equator, the North and South elevation of buildings see little direct solar radiation. The East and West elevations are only exposed to the sun for a few hours in the morning and in the afternoon respectively. The rest of the time, they only receive dimmer, indirect light.

Also, the efficiency of the panels is r

educed at elevated temperatures, and their exterior glass surface reflects much of the sun’s light at sharper angles, further reducing the range of times when the panels can perform at their peak efficiency. It thus appears that in this region roof-mounted panels are a more sensible option. Non-silicon-based thin-film paints are now becoming more and more common, and these tend to be less plagued by these issues, but most are black in colour, which limits their possible use on building façades, for aesthetic reasons. Nonetheless, harnessing solar energy is another topic that is heavily researched at the moment, so there is hope that the technology will become more readily deployable on building façades in years to come.

Totally green façades, in a holistic sense, may not yet be a reality, but heavy research efforts combined with simple but clever design ideas consistently bring us closer to this reality. Designers have been learning to work with rather than against nature, guided by some of the early masters of this art (AntoniGaudì, for instance). Bringing in or seeking inspiration from vernacular design strategies and from nature, blended with modern materials and technologies, can maximise the potential for green façades.