Why to Choose Fabric Façade?

The fabric façade concerned in this article is the one used as an architectural façade feature, sun glare control and LED screen outside of the existing building envelope façade. According to up-to-date market experience, stretched fabric façades share in the façade market has grown significantly against traditional hard material ones.

Why is that? Below are the major factors:

Dead Loads Erosion: Fabric is approximately 100-times lighter than the glass this will not only reduce dead load reactions but will also make the installation cheaper, faster and much more environmentally friendly (fewer machines). In addition to that, the cost of structural steel & its foundation needed for fabric façade is dramatically lower than the hard façades.

An endless variety of color, openness, shapes & sun glare control: At an affordable cost, fabric façade can be of any color or printing pattern. The possibility of having solid or open mesh fabrics with a wide variety of shading coefficient makes it easy to the sun glare lovers to enjoy day light at their preferred comfort levels. The energy saving is immensely enhanced with enhanced shading coefficient. Unlike hard materials, the fabric can take any curvature or any shape by its nature.

Best LED reflection screen: Stretched fabric is still offering best screen experience. Since the early days of cinema, silver lenticular (vertically ridged) screens, which are made from a tightly woven fabric, either natural, such as silk, or a synthetic fiber, that’s why until our days, some are still referring to the cinema industry as “Silver Screen”, it was in simple words one of first modern stretched fabric applications.

Fire safety: Unlike what inexperienced mindset may think about fabric, we can safely state that fabric fire behavior is not less safer than any other hard façade. Perhaps it is famously known that some kinds of fabric are classified as non-combustible such as PTFE for instance, yet even other kinds of B-class, such as ETFE and PVC are behaving safely too, but with different philosophy as following:

Durability: As like any other material, if you choose the right quality fabric materials, fabric fabricator, and abide with the preventive maintenance recommendations, then the fabric façade life expectancy is not less than any hard façade. Generally speaking, fabric life expectancy is ranging between 25 to 35 years, depending on its components, the way of application and location. Nevertheless, even after 25 or 35 years, if you wish to change the façade color, printing, shading coefficient (make a brand new look of the new façade) that is unquestionable, and without any doubt feasible on fabric façades exclusively.

Inspired by the palm tree trunk, the national tree in Arabian gulf countries, the stadium outer façade was designed to cover inner envelop with additional outstanding palm trunk look and at the same time reducing sun glare and heat on inner envelop while allowing it to breath. The 612 panels façade with approximate 92 different sizes and inclination was preliminary intended to be made into hard materials such as GRC (glass fiber reinforced concrete) or with fabric as an option. The shape of each palm trunk panel is curved to mimic nature and therefore the intention to use GRC was to make sure that inspired shape is fully satisfied or simply molded.

Eventually, the conclusion was to make a fabric panel mock up and inspect its viability against GRC (refer to Fig.1 and Fig. 2). The fabric would be stretched on a steel frame with an intermediate arch (refer to Fig. 3). After mock up inspection, the decision was obviously to confirm fabric option for the following reasonsFig.3: Façade Mockup (view from inside) 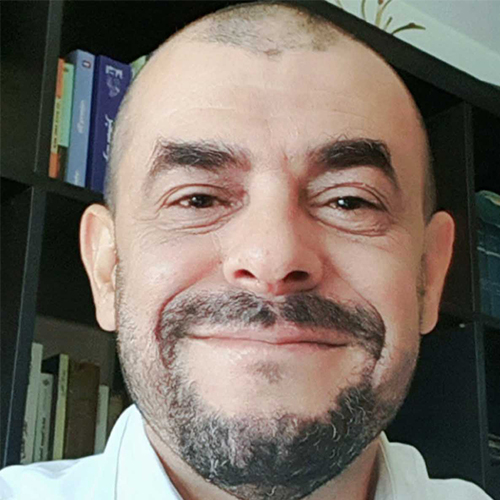 Ahmad Dalain is the Director of Project at Taiyo Middle East LLC, a daughter company of Taiyo Kogyo Corporation Japan worldwide leader in membrane construction and innovation with unprecedented experience since 1929. With 40 companies all over the world, Taiyo is the biggest membrane contracting company in the world. Dalain is a structural engineer with a Master’s degree in structural engineering science, and with more than 22 years’ experience focused on membrane construction innovations in the Middle East and other parts of the world. He is considered one of the few most prominent experts in the field of tensile structures (PTFE, ETFE, PVC, and other innovative materials) in the Middle East with many landmark projects executed under his directions watch, the last of them was the 70m height AL WASL DOME membrane façade at EXPO 2020 (The biggest projection screen in the world).