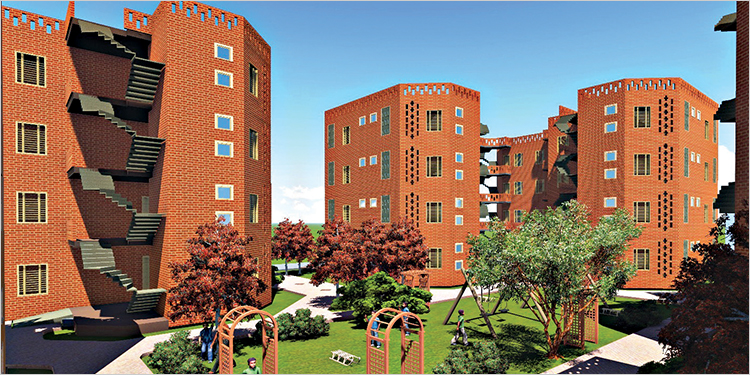 Kathputli Colony is New Delhi’s largest performers’ slums, home to magicians, dancers, puppeteers, acrobats and drummers whose families migrated here during the 1960’s and 1970’s from villages across India. An illegal settlement in a dilapidated northern pocket of the city, this place is a thriving paradox. Its denizens allure their audiences into a resilient world where everything is possible.
This thesis is an exercise – not merely in affordable housing and slum rehabilitation schemes, but in the exploration of possibilities. The idea is to create a scheme that resonates with the people of Kathputli, allowing them to thrive as artists. And on the other hand, exploring the larger perspective of amenities we must take up cost efficient architecture with special emphasis on treatment of fenestrations as our priority. Delhi climate is a monsoon-influenced humid subtropical climate with a very high variation in comparison of summers and winter. Summers begin in April with temperatures peaking in May. The monsoon season begins in late June, bringing heavy rainfall through mid-September. The moderate post monsoon season lasts from late September through late October. Winters begin in November and are generally mild, with the occasional temperature dips below freezing.
A dense to moderately dense, low-rise built form with mutual shading is proposed for development in this type of climate.

The advantage of low-rise development is greater contact with the ground which helps to balance internal temperatures. Protection of outdoor spaces, mutual shading of external walls and shelter from the wind during hot summer days and cold seasons, shelter from the dust and reduction of surfaces exposed to solar radiation are the other important aspects to be considered. Further, the desirable orientation of the dwelling units taken up is N-S and masonry adopted is Rat Trap Bond involves laying bricks on edge and not flat and also provides better thermal insulation via the cavity in between the bond that helps in controlling the temperature of interior spaces by creating air between bricks thus helping to maintain better insulation from heat and cold. With this, the structure can carry 20 per cent more load than conventional Flemish bond and there is 25-30 per cent cost reduction as fewer bricks are used and also there is no mortar required in the middle of the cross brick thus, 40-50 per cent of cement and sand is saved.

A variety of outdoor spaces is important for various day to day activities to take place and since the courtyard type of built form is very suitable for thermal regulation, it is richly explored in the design scheme. Further, considering the most important aspect of fenestrations with cost efficiency as the main theme we must take up frameless doors and windows of construction is up to G+3 as in the proposed design scheme of the slum rehabilitation undertaken and then, the foremost cost efficient as well as environment-friendly technique is to use brick jalis in the walls with a vision of reducing the material quantity and at the same time infusing fresh air into transitional spaces reduces dependence on artificial ways of ventilation.. The prime beauty to this technique is that it can be played into recesses and projections pretty well and we could even erect the jallied opening at an obtuse angle to shield from the penetration of mosquitoes and other unwanted things at our ease, the famous application of this is done at Coffee House, Trivandrum which is one of the famous buildings of Ar. Laurie Baker. Besides this, we could take up embroidered jali patterns and also intermix jali with small glass panels or any other suitable texture for instance rubble masonry in few niches to not only create an aesthetic impact but also give a strong definition to the facade treatments.

Then, the very vivid application in fenestrations world was glass beer bottles embedded in concrete to create a stained glass effect when the sunshine falls on it. This technique has been adequately proposed in the design scheme so that life is inherited in almost all the dead walls and there is ambient environment maintained. The only criteria is that, such effect is preferred at the rear wall so that mutual shading of buildings enhance the common areas and also in case the complete façade involves such treatment we must consider the stability concerns if the load bearing wall is adjoining the cantilevered staircase and also; the designed panel with different glass bottles embedded in concrete to formulate floral or any geometric patterns should be well tested for different loadings (Such type of facade treatment via fenestrations is successfully executed at Trainee Hostel Block of Institute of Management in Government, Trivandrum).

Besides this, another type of fenestration propo

sed is a bamboo louvered window that is the most cost efficient in practice as a variety of bamboo is readily available in our nation and few important ones with comparable tensile strength (Bamboo Tensile strength = 210MPa) as mild steel-250MPa are available in north India. All we need to do is to treat the bamboo well with natural reagents (a mixture of borax and boric acid in the ratio 2:3 with 45 liters of water to make a batch of 50kg) and bamboo could be either directly embedded in masonry or could also be bolted via hinges.

Moreover, strictly speaking, fenestrations are an important key element in the passive cooling system of the proposed design scheme, thus, the orientation of the same is a major factor. For a place like New Delhi which experiences extremities in climatic variations it is best to orient the unit in N-S direction and avoid the larger placement of op enable fenestrations in E-W direction and South wall, it is better to utilize these walls for glass bottle effect so that at least light could penetrate with a stained infused effect without direct glare during the daytime. Further, passive solar design strategies may vary with the location of the building and regional climatic differences, but the primary window guidelines remain the same- choose, orient, and position openings to minimize solar heat gain effect in the summer season and maximize it in winters.

Also, the monsoon wind direction should be at priority while designing a habitable building since it is the worst condition for which we must provide the necessary ease and comfort to the occupants. Monsoon wind direction in case of New Delhi is SE and E; so we must incorporate techniques and preventive devices to cater to the protection of the facade treatment and as well as to the fenestrations provided in the building such that it aids in the well-being of the occupants rather than causing difficulties during sudden abrupt changes in weather. Moreover, in such climates, major glazing areas should generally face south direction to collect solar heat gain during the winter season when the sun is low in the sky. On the contrary, in the summer season when the sun is high overhead, overhangs or other shading devices could prevent excessive heat gain that comes up. Lastly, to be most effective in executing our proposal, worst south directional facing fenestrations that are major contributors to heat gain should have a solar heat gain coefficient of more than 0.6 to maximize solar heat gain during the winter. It should have a U-value of 0.35 or less to reduce conductive heat transfer during summers, and a high visible transmittance for good visible light during working hours of the daytime.

On a concluding note, fenestrations shall perform their role only if adequate distance is maintained in between the buildings to not only take up mutual shading consideration as in this case but also take up the aspect of sick building syndrome and complimentary open spaces with sit outs and shaded trees shall enhance the play of fenestrations in the buildings all the more to achieve the desired ambience. Hence, the study provides design solutions for the selected site with a view to evolving a sustainable neighborhood model. Some of them include avoiding sprawl to limit the use of vehicles, allowing mixing of compatible uses, providing equal access to social and physical infrastructure, social inclusion incorporated in design by mixing of diverse income groups, street design to encourage pedestrians, building typologies encouraging social interaction and making streets safer by reducing thoroughfare and encouraging natural surveillance.
(This Thesis was submitted by the author to Dept. of Architecture, Guru Nanak Dev University in May 2016)