Glass is undoubtedly the material of choice for curtain walls. It represents the ultimate material of choice for lending a diaphanous appearance to the building envelope. Glass is also a very resilient material, able to withstand large deformations and strong chemical attacks. On the other hand, glass also displays certain fragile characteristics. In addition, glass make-ups have becoming increasingly complex in recent years, mixing coatings, lamination, multiple plies of glass, and more. This complexity yields more opportunities for failures or reduced performance. Preserving the appearance of glass within curtain walls can prove a daunting task. In this article, we review a number of common issues that can adversely affect the visual quality of curtain wall glazed panels, what causes them, and how to avoid or minimize them.

All other glass types are processed from float glass, so it is logical to consider issues affecting this glass type first. Of all the visual problems that may plague float glass, scratches and pinholes (technically called “linear and point blemishes”) are undoubtedly the most common. It is practically unavoidable for such blemishes to be caused to at least some of the panels on any given project. These typically occur during transport and installation, even though some may actually appear during fabrication, and post-installation, prior to handover. The easiest way to avoid such problems is to implement adequate surface protection on glass panels for as long as possible. In terms of assessment, several codes of practice provide guidelines as to what is considered acceptable. Typically, this involves observing glass panels from a given distance in order to assess how visible a particular blemish is, then measuring its size and distance to the center of the pane.

Ironically, protecting the glass for extended periods of time, or improper storage techniques, in turn, may cause aqueous corrosion of the glass panels. At first, this appears like a faint rainbow on the damaged surface. If corrosion is allowed to proceed further, or if the glass is in presence of strong alkali (such as cement runoff), the process turns the surface of the glass into a powdery, milky substance. This is relatively difficult to get rid of, and requires a sp

ecial chemical treatment, or buffing using cerium oxide. Spandrel glass in curtain walls is particularly susceptible to this phenomenon if the spandrel cavity isn’t adequately ventilated, or if the ventilation allows the intrusion of pollution, or airborne chlorides for projects located close to the sea.

Glass is heat-treated for various reasons, principally for increased safety and strength. However, this very treatment actually causes physical distortions, which in turn alters the visual quality of the glass panels, particularly in terms of reflection. Along the edges of the glass, tempered and heat strengthened panels tend to curl slightly, which distorts images in these regions. Similarly, in the center portion of the glass, wavy lines (called “roller-waves”) develop perpendicular to the direction of travel in the tempering oven. In order to minimize these effects,

the temperature in the oven should be carefully calibrated and controlled, and the thickness of the glass can be increased beyond the minimum required for purely structural reasons. In addition, glass panels should be installed such that roller-waves run horizontally. This makes them less noticeable, but is only possible if the width of the panel fits inside the tempering oven, which in turn can limit the width of curtain wall modules.
Another form of physical distortion that can result from heat treatment is called a “dish” or a “dimple”. These defects cause a visually disturbing, localized lens effects that appear as a result of poorly controlled furnace, or localized buckling of the glass during the quenching process because of issues with the air nozzles. Good control over tempering parameters, and a good regime of the furnace should eliminate such issues.

On the other hand, one physical phenomenon that is harder to control is anisotropy. This effect appears when polarised light hits heat-treated glass at certain angles, causing the appearance of what is casually called “tiger stripes” or “leopard spots”. These tend to be more visible on overcast days, or when wearing polarised glasses. Minimising the stress in the glass, and obtaining as uniform stress levels as possible in the panels both contribute to minimising this issue. It is also good practice to carry out a full-scale visual mock-up, with all stakeholders invited for viewing in various light conditions. If this step is not intended to circumvent anisotropy, it has the merit of alerting designers and owners on the potential risks.

Laminated glass is obtained by combining two or more glass plies with layers of a polymer called inter-layer (typically polyvinyl butyral or PVB) for safety and/or acoustic reasons. In curtain walls, it is often used at least for panels that are located immediately above the floor level, and it is even compulsory for curtain wall applications in some countries. PVB is originally a translucent material that becomes transparent once bonded to glass panels in an autoclave oven. However, PVB also happens to be highly hygroscopic, and tends to return to a translucent or cloudy appearance if the edge of laminated panels is allowed to sit in water for extended periods of time. The process is usually reversible, and PVB can become fully transparent once again if moisture is allowed to escape.

The design of the curtain wall should be such that the water isn’t allowed to stand over the edge of laminated glass. This involves, amongst other things, the provision of sufficient drainage paths.

The interlayer in laminated glass can also be incompatible with other chemicals components that go into the make-up of a curtain wall, such as sealants or gaskets. When this occurs, a phenomenon called delamination can take place. The interlayer essentially debonds locally from the glass plies forming circular, worm-like or sunburst bubbles between the glass and inter-layer. This is fairly easy to circumvent, though, by implementing a thorough compatibility testing regime. Delamination can also be the result of excessive deformation of heat-treated glass, insufficient interlayer thickness or clamping during the autoclaving process. Once again, this can easily be avoided through proper manufacturing practices, and selection of adequate interlayer thickness.

Like laminated glass, insulated glazing is obtained by combining together several two or more plies of glass. Instead of bonding them with an inter-layer, the glass panels are bonded along their perimeter, typically using a pierced metal spacer bar containing a desiccating agent. The spacer bar is bonded to adjacent plies with a moisture vapour barrier (usually polyisobutylene or PIB). If the latter is incorrectly applied, or if the surface of the glass wasn’t properly cleaned at the time of application, moisture vapour is allowed to enter the space between two glass plies.

There are no visible symptoms until such time that the desiccant has become fully saturated, at which point condensation appears on the inside face of the insulated glazing, and the glass becomes hazy. Once this point is reached, there is no other solution but to replace the affected panel. Preventing the appearance of condensation can easily be avoided through proper quality control in the glass processing plant.

Another common issue that regularly affects insulated glass is the presence of foreign materials between adjacent glass plies. These range from dirty footprints, to leftover traces from dirty suction cups, to spilled desiccant, to dead insects. Once again, all of these can prevented through the implementation of proper checks in the factory.

A variety of coatings are applied to glass for aesthetic reasons or to improve thermal performance. Coatings typically consists of extremely thin layers of metal oxides and other chemical elements. This extreme thinness means that coatings are susceptible to damages such as pinholes and scratches if mishandled.
Since coatings contain various types of metals, a narrow band of coating is removed from the perimeter of the glass panels. This process is known as edge deletion, and it needs to be carried out precisely. If it is excessive, a clear band of glass is visible along its edge

s, which is unsightly. If it is insufficient, a coloured band of coating appears against the PIB of the insulated glass panels. In extreme cases, it may even lead to corrosion of the coating.
Extreme control is also required in terms of the layering of the coating, and in particular the thickness of each layer. Any deviation in the coating composition will result in unacceptable colour inconsistency, either within panes, or between different curtain wall panels, with disastrous effects on the appearance of the affected building.

Glass is a ubiquitous material in curtain wall thanks to its outstanding properties, clarity and versatility. However, its appearance can easily be marred by a number of manufacturing problems or in-service issues. Minimising or eliminating these difficulties takes strict quality control procedures in the glass processing plant, in the curtain wall factory, as well as on site, along with proper design of the curtain wall panels. 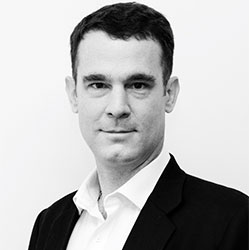 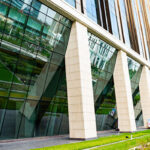