Nature and nature’s laws hide in the night, thus any austere or complex structures during the moonlight demand beautifications, which can only be done by artificial lighting. The elements of the building, where an architect and structural engineers have put up a lot of efforts, making it a benchmark has to be highlighted as one of the most prominent elements of the structure, thus appropriate lighting can complement its exterior. The façade lighting does not only help to localise the buildings and provide security, it also plays a key role in the architectural expression.

The illumination of façades should be done keeping an eye on the surfaces, materials and the degree of reflectance – the step to basic illumination of a façade is normally executed by breaking it into simple shapes to which a uniform illumination is applied and accent lighting is applied in order to emphasise a particular element.

Brainwave Design, one of the well-known names among lighting designers, is associated with many prestigious projects in India and abroad. Here are some of their projects showcasing innovative lighting designs:

93 Avenue, a perfect space for modern businesses at Pune, has façades highlighted with elegant and glamorous lighting

From highly functional design to stunning contemporary architecture with art and sustainability features, 93 Avenue is an all-round center and perfect space for modern businesses. The new shopping mall & commercial space in Pune is spread in 500,000 Sq ft of retail space with 20,000 Sq ft of air-conditioned atrium space for a multitude of activities.

The client Raviraj Realty desired simple but elegant and glamorous lighting without upsetting the contemporary architectural elements. The concept started with picking up the vertical lines with direct view linear LED lights 3000K, and highlighting the canopy ceiling to look like sun spreading its rays the façade is integrated with giant media screen.

Placed along the corner of the Prahladnager and S.G. highway in Ahmedabad, the Parshwanath Business Park is not just a new landmark but a visual treat. “As a designer the main intent was to realise the determined concept into modest budget without surrendering the design intent.

We wanted to fashion a rhythm & dynamism while lighting the façade. At the same time, the building has now become a benchmark in Ahmedabad. And it has become the talk of the town across India,” says Rushabh Patel of Apical Reforms.

The concept started with vertical features (fins). These were picked out by IP 65 RGB Moving headlight which has many features like colour changing along with animation, zoom in, zoom out, 17000 lumens, colour temperatures ranging from 2000K to 10000K, as well as pantilt 540 degrees to 270 degrees. The façade was given even wash from a mast which was placed at 45 degrees to the building façade.

There was no light fixture mounted on the façade hence less cabling and easy maintenance. The lights used for the façade are DMX controlled and were programmed online from Mumbai.

The elevated glass façade was conceptualised as a rippled skin that covers the building. To add mutability to the form, these films were given a ripple effect based on preset parameters using the DMX dedicated software. With minimalistic appeal to the façade, the desired look was achieved with minimal light fixtures.

The façade looks impressive at night with its warm glow

The Tropical Retreat is located in the hills of Igatpuri off the Mumbai Nasik Highway, A resort project completed in 2016. Tropical Retreat Luxury Resort & Spa is one of the Mumbai city’s best getaways. Sprawling over 8.5 acres with lush green landscaping, with 63 luxurious guest rooms

The client desired to have a façade lighting to reflect in the water body and ensure the façade not only looked impressive at night, unsightly cabling should not detract from the architectural charm and beauty during the day, attracting tourists from Mumbai and Pune, by giving the development presence and charisma. The project brief was to amalgamate the block of buildings by picking out the features that would render the façades character best at night.

The concept started with the vertical features – These are picked out by narrow up- & down-lights in 2700K, giving an inviting warm glow to the vertical column. Narrow beam up-lighting was methodically planned to ensure the right amount of shadow and highlights, allowing the form of the building to be expressed from wherever your viewpoint. With minimalistic appeal to the façade, the desired look was achieved. 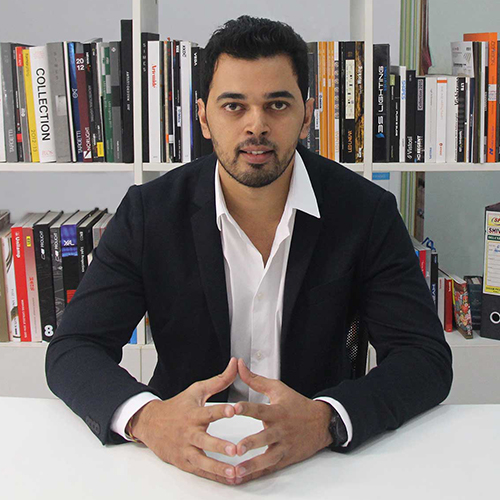 Sushant Surve is the Founder and Principal designer of Brainwave designs, and an associate member of the International Association of Lighting Designers (IALD), an award-winning lighting consulting firm based in Mumbai, India. He has over 13 years of experience in lighting design and has managed various types of small-and large-scale projects in India, Africa, Dubai, Oman & Nepal, including museum, residential, commercial, house of worship, hospitality, ultra-lounges, and façade. His critical eye for detail ensures that all designs that are churned out by the team are unique, correct and best suited for his clients. Surve’s role in each project is to ensure that the best technical solutions are flawless, unfailingly and powerfully integrated into an artistic whole.