Our conceptual image of a home is a haven far from the madding urban crowd, away from the noise, visual pollution, and a place of retreat from everyday worries where we can rest and rewind. However, what comes first to the mind when thinking of the inner space of “home”, is the notion of “protection”- against all above. Standing for such a sense of security would be the “curtain” hanging and dancing, “symbolising” a home behind.

Creating a shared ground between architecture and the city, in this building as a group of “homes”, the curtains swinging with the breeze, which would call up the image of a warm hearth and home, acting both as a representation of a house guard without and the warmth within, have been used as the façade to recall the moment when they, swinging in the breeze along the soft rows of “bricks”, have just stepped aside to let the light into the pleasant space of the house they encurtain.

For the brick surface to be easily observable, it was decided that the brightest-coloured bricks be used, moreover, brick-covered cubes are installed over darker and rough surfaces of stone-covered background.

To achieve the curve of the bricks over the cubes with ultimate precision, 227 horizontal sections (each 20 centimeters in height) were provided in the real size, they were cut in reverse on plasterboards for a better control and also to facilitate the brick rows implementation. In the end, to allow the façade to stay clean, a water-repellent cover was applied over all the stone and brick surfaces.

Niayesh Office Building overlooks a busy expressway in Tehran and is set on a disproportionate semi-triangular plot of land. The main objective of the design was to create a form that would not reflect this disproportion. The central concept behind the design was to set the layers free from a monotonous repetition or other structural confinements. Here, each layer moves independently from the one on top or the other below. The floor layers, while not exactly similar, build up in a free manner and take on a light single-material stone-cover to create a harmonic and a homogenous identity/quality of the building.

In the sunlight, dark shades are drawn over these monochrome shapes which make the lines take on a more horizontal characteristic. This characteristic is further highlighted by the height of the building in proportion to its area (seven floors on the ground). The windows, further define this concept, where some are again stretched alongside the building as they mean to help the eye glide around it. The building’s identity also takes cues from the high level of kinetic energy surrounding the site in that it resembles a photographic image of a fast-moving object that is seen as stretched (and sometimes) wavelike lines.

All this provides the building with free-floating lines that run all around it and connect the north-south orientation very smoothly, avoiding any sharp angles and giving it an aesthetic consistency on every level. The interior moves along the same concept of spatial smoothness and flow. The units have been designed based on an open office system and may be partitioned according to their desired functions. To benefit from the daylight and the fascinating views of the city, mountains and the sky, large windows have been installed.

Exterior lines flow into the interior in a calmer softer way, and then onto the ceiling where they have formed track of lights and together with other lighting designed into the ceiling that provides the lighting at night. The bright white colour of the walls, the floor, and the ceiling reflects the same concept of the mono-material and harmonic façade.

Aftab Office Building is located in a dense area of office buildings in a narrow alley. The initial ideas of the design were formed by the image of “light” penetrating through layers of curtain shades and the disorderly light and dark lines, and this conflict found objectivity in black and white colours.

The etudes continued in a form which led to designing the main façade by black domination as well as an interference of delicate white lines and surfaces, while the interior area, as a contrast to the exterior (and the façade) was allocated to a white space as an absolute light with a delicate rhythm of darkness as black thin lines.

The continuity of the action between black and white and also inside and outside is an effort to eliminate dullness of the alley view as well as providing the building with free-floating components. In the interior space, the goal was to use large windows to provide the place with sufficient daylight and a vast view.

The external lines of the main façade have penetrated inside the units and have formed black linear slots for lighting on the ceiling which have contained the interior spotlights, and along with other spotlights in the ceiling, provide night lighting. The bright white colour of walls, floors, and ceilings reflects the same idea of the single-material and providing a harmonious and homogeneous space. 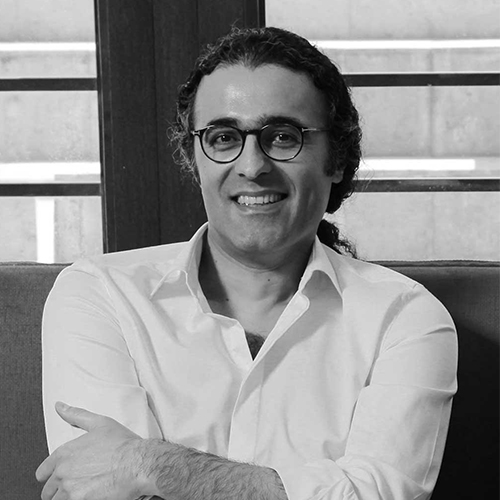 Behzad Atabaki has founded “Behzad Atabaki Studio” in 1999 and also co-founded “BonnArq Architects” in 2014 which both are recognised for their work in art, architecture, urban design, and landscape architecture. Winning the first prize in the competition, together with Parshia Qaregozloo, he has been the co-curator of the Iran Pavilion at Venice Architecture Biennale 2016. In 2019, he won the “ARCHITECT OF THE YEAR” award in the Middle East Architects Award. Believing in the multidisciplinary approach to architecture and urbanism, Atabaki has earned three master’s degrees in three interrelated fields of “architecture” (1998), “urban design” (2002) as well as “landscape architecture” (2006). Since 2010, he has been teaching “architectural design” regularly at a University.