The proposed 383m tower, Altitude, will be 211m taller than the current tallest building – World Trade Center – at Colombo, Sri Lanka. This mixed-use high-rise development, is planned as a revenue-generating landmark structure that shall mark Sri Lanka’s presence on the world map of high-rises. The skyscraper will incorporate various private and public spaces including luxurious apartments and penthouses, retail and commercial spaces, a revolving speciality restaurant, an indoor cricket training facility, and a 360degree observatory.

The curtain wall concept is implemented in the façade design of Altitude, amounting to an approximate of 1, 10, 000 Sq m of glazing area. The research below traces the underlying decision that led to the development of the overall curtain wall concept; focusing on the design options at different location on the exterior, and also on the intricacies of the design.

Entrance: The external façade is of aluminium vertical post with stainless steel patch fittings for the shop front areas. Laminated glass units have been used considering safety of occupants. Two frameless automatic sliding doors are used for entry and exit of commercial areas with an entrance canopy of 9 m.

Podium: The podium levels include the commercial and parking area which incorporate the Di-Grid arrangement using capped curtain wall concept spanning. A combination of reflective double glass units and reflective stainless steel / aluminum panels are used for aesthetic value. There is no glass closure for parking area to facilitate the water cooling arrangement behind curtain wall.

Bat Levels: The bat levels are Level 15 to 65. It uses the inclined unitized curtain wall concept for the entire façade closure of 51 levels. A corner

arrangement is provided for connecting the inclined glazing with the straight glazing on the sides. A 4 hour fire rating arrangement is provided with
parallel open-able windows for 30 per cent better ventilation. 10 per cent of total façade vision area are parallel open-able windows as per norms. Castin anchor channels are to be used for installing the unitized systems.

Handle Levels: The handle levels are Level 67 to 91 which are in the shape of the handle of the bat. It uses the inclined unitized curtain wall concept for the entire façade closure of 25 levels. External fins on all levels of the handle areas mimic the rubber rim on a cricket bat handle. 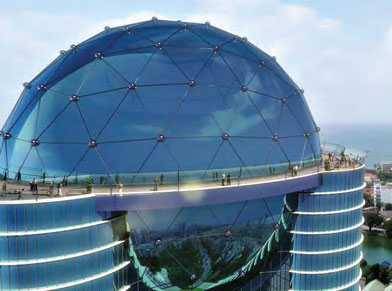 The Sky Deck on Level 16

The Entertainment Deck on Level 14 and the Sky Deck on Level 16 incorporate 2 m high aluminum and glass balustrades with laminated sentry glass for safety of the occupants. Clear glass is used for continuous vision.

Dome Level: The dome hosts the Indoor Cricket Academy on Level 96. A stainless steel structural grid supports the 54 m diameter façade enclosure. The façade incorporates a combination of glass and photovoltaic panels for achieving the concept self energy generation. Laminated double glass units are used for safety of players. 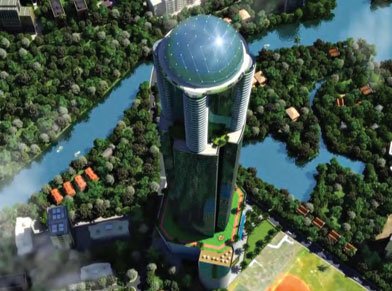 Bird’s eye view of the project

Reinforced Cement Concrete (RCC) is adopted for the design of all structural members of altitude. The environmental exposure condition for the structure is taken as ‘Extreme’ ensuring minimum Cement Content as per codal requirements.

Altitude is designed as an all reinforced concrete structure with high grade concrete in combination with high grade steel right from the foundation to Level 96, and is topped with a structural steel braced frame to support the glass facade. The structural framing system is designed as a combination of ductile shear walls with ordinary moment resisting frames. The lateral loads which are acting on each floor are shared by beams, shear walls, columns & floor diaphragms. Linear static analysis has been carried out for this structure.

The Structure is subjected to 3D frame analysis wherein the various parameters for the stability and serviceability of the structure under
service loads including drift, deflection, torsion effects, and soft storey effects are ascertained and complied with the codal requirements. The Beams are designed for the critical bending moments and shear forces for various load combinations under service loads. Columns are designed for axial loads, lateral loads, biaxial moments resulting due to frame moments including wind and seismic forces, slenderness effects and eccentricities.

Ar. Reza Kabul is the president of the design firm ARK Reza Kabul Architects. Established in 1988, it reflects the common vision to inspire quality living through innovation, sustainable design and holistic design approach. ARK began its practice in a time of exciting change and urban growth in India. Today, with strength of over 100 full time employees, the studio has grown drastically along with the country. Keeping in mind our clienteles unique background and need profile, they develop innovative approaches to design, access cutting edge technologies, and implement advanced management practices to provide optimal solutions with a focus on quality, timeline, and cost economy. ARK Reza Kabul Architects is headquartered in Mumbai (India) with offices at Pune and San