When Sabyasachi Sen &Associates(SSA) was approached by ITM University to build the new academic block to their existing building, it posed an enormous challenge. The existing building was built in the 1990s in the neo classical style of Architecture. The proposed site of the New block was immediately abutting and at right angles to the old building.

‘The owners wanted the new academic block to reflect vision of the future without jarring & conflicting with the old one.’

A seamless and continuous visual impact was desired from the façade having good thermal performance combined with high visual transmittance keeping in mind the comfort and needs of the inhabitants of the building. It was particularly desired,that the ugly staining/ bleeding effects of external silicone based façade systems which plague many modern buildings, should be avoided.

The Design team at SSA had to come up with an innovative & unique solution to address this challenge. They picked up the vertical proportions of the existing building and continued them in the new block at right angles giving a feel that it has just ‘burst out of its old shell’. The colonnade on the ground floor was continued up to half the length of the new building & then gradually made to merge with the upward flying lines of the facade.

“The facade of the new block is east & north facing and gave us the flexibility to play with large swathes of clear glass” – says principal architect Saby Sen. 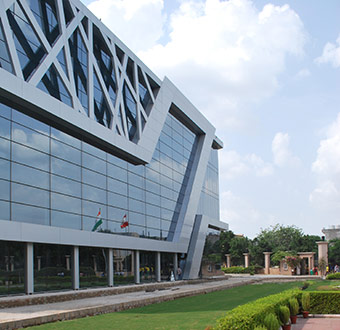 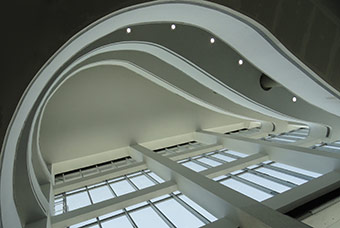 The major construction challenge was to replicate on site the typical geometry and shapes of the various crisscross elements in ACP and glass exactly as was planned in the design studio. With cooperation from the façade contractor and immense grit posed by all the parties involved, this enormous task was achieved impeccably.