The Opus At Business Bay, Dubai

In the heart of Dubai, halfway between the world’s tallest building (Burj Khalifa) and the newly opened Dubai Water Canal, construction is coming to an end on yet another landmark for the city: The Opus by Zaha Hadid.

The Opus is a mixed-use 20 story building – hotel, serviced apartments and offices –which resembles a glowing cube that floats above the ground and has a freeform void in its centre. The building consists of two concrete towers connected by a steel bridge on top and a large steel supported atrium roof at the base, seamlessly cladded with glazed curtain walling. The external façades are built with transparent glazing with a mirror pattern, in contrast with the freeform inner “void” area which has dark blue glazing.

Our job since the start of the project was to provide consultancy services on the building envelope engineering. From our main office located in the vicinity of the building site, Koltay Façades conducted the document review and site supervision during construction, with a strong understanding of the original design intent and the interests of the client, working to ensure the high quality delivery of the project.

The fully glazed skin of the building is constitu

ted by a combination of various solutions. The external straight façades and the inclined and curved void façades are built with a female-female unitized curtain wall system, which was selected among many aspects for its good curving capabilities and drainage on inclined surfaces. The skylight and soffit areas are built with a back drained cassette system with a carrier frame to enhance shape control and offer protection of the edges during handling. And lastly, the recessed double-story podium glazing is supported by sleek carbon fibre composite fins and includes an array of large size narrow-frame doors.

In addition, a sophisticated lighting system is integrated into the void area façade. A matrix of lights was fitted inside the joints between panels (without blocking panel movements) allowing the void to glow and pulsate at night while remaining invisible during daytime.

Even though the external elevations are flat, their appearance is nothing conventional. The façade was designed by the architects with a pattern of dots of changing diameters, arranged in stripes for an overall pulsating effect.

This pattern was envisioned as a highly reflective mirror-like coating, and finding a product that fitted the budget, matched the aesthetic requirements and allowed low-e coating on top was a long process that involved a large number of glass manufacturers. The final product was obtained through a similar process to ceramic fritting. A mirror ink was applied on the glass through silk screening and dried in a furnace prior to deposition of the low-e coat. The glass was then assembled to Insulating Glass Units (IGUs) with the patterned coated surface being in position 2, which gives the best performance in hot climates.

The void façade geometry is a smooth compound of freeform curved surfaces that was analysed with parametric software, by checking panel sizes and offsets of the fourth corner in relation to the other three corners of a panel that define a reference plane. Values of around 80-90 mm were common, occasionally reaching up to 150mm on panel sizes averaging 1500 x 1950mm. This analysis was essential for assessing the different methods of producing curved glass explained here under.

Though some areas consist of flat panels or single curved panels, the majority of the void façade is comprised of complex double curvature panels. Single curved glass, cylindrical and conical, is relatively easy to produce. This process takes only a few minutes and is done by special furnaces that have been available for years and are capable of curving and tempering at the same time. On the other hand, double curved glass is much more complex to produce. To fabricate this kind of panels, flat glass is placed over custom-fabricated moulds (adaptive moulds are still not a working reality) and heated up to approximately 700°C. As glass slowly softens, gravity causes it to sag and take the shape of the mould supporting it. The drawbacks of this method are that it is slow, uncontrolled and produces panels which are not tempered.

Since thermal stress on glass is a big risk in a climate like Dubai, especially for a dark blue product having high solar energy absorption, the panels needed to be tempered. Chemical tempering was available, but it was very expensive and suppliers did not offer long term warranties for a high sand abrasion environment. For these reasons, it was important to somehow reduce the number of hot bent panels to a minimum, so the decision was made to replace those with a small degree of curvature with cold bent tempered flat glazing. Cold bending is a cost effective way to shape glass which can be done in different ways: by bending glass only (shape forming with laminate), or by forcing the glass to take the shape of the frames. Finally, the second method was adopted and flat glass was cold bent while bonding it with structural silicone to the curved frames.

The next step was to find an appropriate glass build-up for the void. Knowing that thermal breakages were a serious threat to the glazing, we conducted a study to determine the amount of solar heat load each piece of glass would be exposed to, and the maximum energy absorption that can occur without thermal breakage. Once this was calculated, the search for a suitable product began. Initial options considered were a dark blue body tinted product and a blue colour PVB laminate. However, both options were abandoned due to problems with high solar energy absorbance and reflectivity as well as with colour variations between the skylight and soffit panels (having respectively the coloured PVB behind or in front of the low-e coat).

Finally, a body tinted option was selected, but this time with two layers of a lighter blue glass which distributed the solar heat more effectively. Additionally, the low-e coating was placed on the inner lite, which is not ideal for a hot climate, but was a necessity in order to reduce the absorption on the outer pane. Moreover, silicone foam warm edge spacers were used in order to avoid temperature shock at the edges. To verify this solution, the final build-up was tested for thermal breakage by heating one half of the panel with infrared lamps while the other half was cooled with water mist, thus resembling a partial shading scenario.

All materials were checked several times, both at origin and in Dubai, and QA/QC checks for shape accuracy were done by measuring with stretched piano wire, digital 3D scan, or CNC-cut foam counter moulds.

In the past years of The Opus development we have witnessed a great advance in manufacturing techniques that allow to produce customized “each piece different” components in the exact same way and at nearly the same cost as repetitive items were mass produced in the past.

There is no question that it is easier to build The Opus today than what it was a few years ago, and will be even easier in a few more years’ time, when critical elements may be just 3D printed in situ. For such to happen we need projects like this to push the limits, induce progress and help to transform the “unique” into the “usual”. 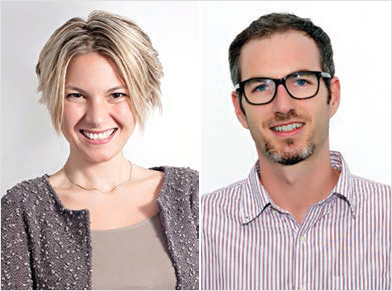 Agnes Koltay, Director at Koltay Facades, holds a Masters in Architecture (Hungary, USA) and a Masters in Façade Engineering (UK). She has worked with award winning architects and international engineering offices, before starting her own façade engineering consultancy, Koltay Facades, in 2011, which is now one of the largest specialist practices in the Middle-East region. She has been based in Dubai, UAE since 2005, and worked on numerous high-rise projects. Current projects include Sky View, Fountain views, and Burj Vista in Dubai and many projects in Europe and Asia. Koltay Façades has opened their second office in Singapore in 2016. Guillermo Fernandez is associate senior façade consultant at Koltay Façades office in Dubai. Obtaining his degree in architecture in the Polytechnic University of Madrid, he has specialized in the technical and detailing aspects of façade design and developed a particular expertise in complex façade geometries. Guillermo has been involved in the design and site installation of several high-profile projects from world renowned architects in Europe and the Middle East.