Opus – A Beautiful Glass Building in the Middle of the City

Depending on the viewing angle, the appearance of the Opus glass building oscillates between a hollowed-out cube and two towers connected via a sky bridge. The building’s appearance plays off the strong contrast given to its two distinct façades of the all-glass envelope: a clear glass curtain wall with a distinct fritting pattern for the exterior faces and a blue tinted glass for the free form interior void. Many of the challenges of this façade were unprecedented in the region and helped driving innovation both in engineering and fabrication.

Against the visual cacophony of endless towers vying for attention in Business Bay, it was decided to give the OPUS a certain quality of muteness. The glass building is wrapped in a simple, clear glass curtain wall and make maximum use of the material’s inherent characteristics and the resulting ambiguous play of reflection and transparency. The façades are made of double-glazed insulating glass units with a UV coating. In addition, a continuous mirror frit pattern consisting of different sized dots was applied around the entire building, helping to emphasis its volumetry, while at the same time dissolving it through the continuous play of ever-changing reflection. The applied frit also helps with reducing solar gain into this glass building.

The void, in contrast, is a free-form organic and fully glazed façade that covers an area of approximately 6,000m2 and consists of 4300 individual glazing units. Whilst appearing as a continuous, fluid surface, the surface, in reality, is a combination of glass with varying thickness, bent in different ways and fitted by using several different techniques. Each of the glass units for the dark blue glazed void is, therefore, a custom-made individual item, and many of them consist of curved and double-curved, double-glazed insulating glass units with irregular shapes.

The lower end of the void is bordered by a freely formed glass roof over the multi-story atrium. At the upper end of the building, at a height of 71m, the towers are connected via a 38m long sky bridge, cladded in curved double-glazed insulating glass units, supported of a double-curved aluminium substructure connected to the structural steel trusses.

The entire façade of this glass building was developed using a variety of 3D modelling and fabrication tools for the primary and secondary steel construction, as well as the curved aluminium profiles, fastening elements and glass units. International expertise was also sought. For example, the substructure of more than 10,000 individually curved aluminium profiles were supplied from Denmark and the Netherlands, the glass units were produced in three factories in China, and the units then assembled in the UAE.

Ultimately the entire 3D puzzle had to be precisely pieced together on the construction site. Also, the selection of the right glass was preceded by a lengthy decision-making and modelling process. In contrast with flat panes of glass, no technical values exist in relation to the compressive strength, tensile strength and flexural strength for curved panes of glass. Due to the fact, the glass curvature and glass thickness affect the flexural rigidity for their part, the solar thermal loads and the maximum energy absorption up to breakage, the minimum bending radii as well as the maximum bending angles for each insulating glass unit had to be calculated.

In addition, the glass structure had to ensure that the solar input remained below a certain limit to prevent dangerous levels of reflected radiation that could lead to thermal breakage on the glass façades opposite. In a hot climate such as Dubai, the thermal load for glass is much higher than in more temperate zones and dark glass units also absorb more energy. In addition, the free form geometry creates reflection onto itself under certain conditions, thereby increasing the heat loads to parts of the façade. A dedicated analysis helped to identify the critical zones within the void façade, where it was necessary to apply tempering – a process that had not yet been industrially tested for double-curved insulating glass units at the time. Chemically tempered, hot-bent glass was not feasible for the scale and numbers required – therefore, a technology specifically developed in the automotive industry for the combined hot bending and tempering of the glass was used.

The insulating glass units are heated to 700ºc, tempered following the moulding process and then cooled with the aid of compressed air nozzles to increase their breaking strength. The units used generally consist of 8mm low-E glass (coated on the inside), a 16mm cavity between the panes, and 2 layers of 6mm clear glass, with a 1.52mm PVB colour laminate. Prior, the geometry was rationalised to minimise the use of double curved glass units. In the end, a combination of flat, single-curved, cold-bent and hot-bent double-curved glazing was used in seamless integration, within the varying wall, skylight and soffit systems.

Another differentiating feature of the void façade is its integration of LED technology. By day, the façade reflects the sky, sun and its surroundings. At night, the void is illuminated via an ever-changing LED installation, consisting of individually controllable LEDs installed within each glass panel. 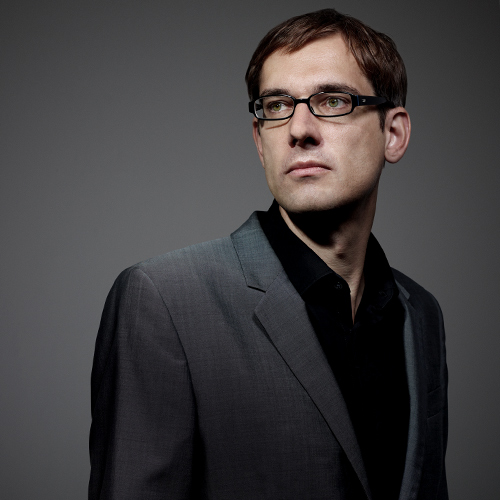 Fabian Hecker joined ZHA in 2002 and has since worked on projects including offices, hospitality, cultural buildings, retail interiors, mixed-use developments, and urban master plans predominantly in Europe and the Middle East. Fabian was a Project Associate on the Opus project in Dubai, a mixed-use tower containing a hotel, offices, and serviced apartments where he was leading the design team and providing site supervision. Currently, Fabian Hecker is overseeing the design of Lusail Hotel tower, a 70,000m2, 5*-hotel with serviced apartments, located at the centre of the new Lusail Marina district near Doha, Qatar, the Saudi National Built Heritage Center, a 8,000m2 cultural building in Diriyah, KSA; and the interior refurbishment of a central section of a large airport in Germany.