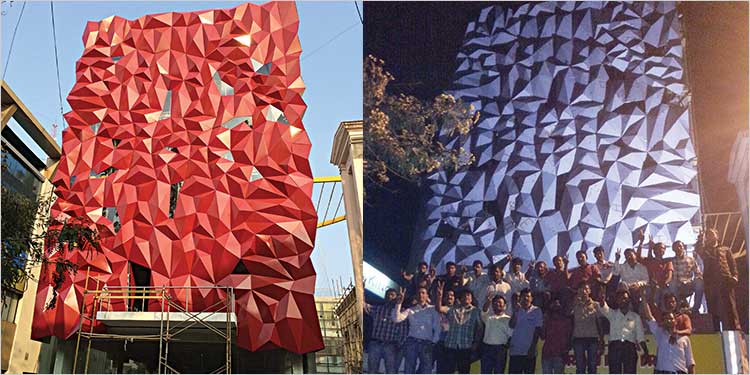 Espree Realtors wanted an eye-catching façade – one that was radical in appearance. Niranjan Kataria, (Partner-Espree Realtors) wanted Architect Neelesh Chopda of Onus Design to think out-of-the-box. In his brief, he was clear that the façade had to be the identity of his commercial building. After much thought the architects concluded on a flamboyant red façade.

The affluent boat club area has always been upper crust and is synonymous with the glitz of glamour – a high profile residential and commercial hub. The street, dominantly lined by boutiques and showrooms, was the premier cerebration of conceiving the design idea.

The project required to be glamorous and exhibit an attitude. It is designed in compliance to the targeted end users which are jewellers, brand stores and corporate houses. It needed to portray a sense of attraction with systematic architectural understanding to create strong visual connectivity with exploration of different materials, solid colours and state-of-the-art finishes. The structure evolves itself as a sculpture enhancing its face value and scale.

RED is fashion, RED is flamboyance….Faceted in solid aluminium, the façade of the project is a mammoth ruby set on a black pedestal. Palliated with a veil of green – The bold union of extravaganza and class.

A precious stone with its irregular facets yields a non-rhythmical pattern giving a dynamic expression….along the colours red and black. Thus evolved the design persuasion. 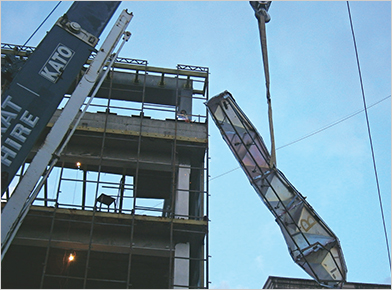 Red 1st Cluster of 6 pieces taken for installationAs the design development advanced, polygons were divided into multiple triangles and elevated to various levels giving rise to a single module…Each polygon was then extruded to three different levels and composed into a geometric system. Diverse compositions were tried to attain variable design patterns in turn making the façade more impulsive. Colour code models were developed showing different panels and number of repetitions.

Technical drawings of the proposed panels thus developed were worked out using a combination of Sketchup & Rhinoceros software. 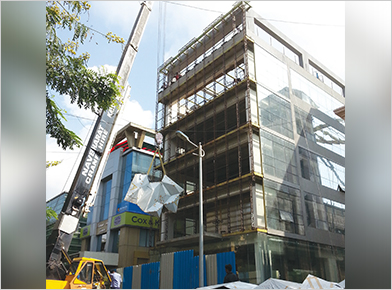 After much technical debate and introspection the raw material of construction was finalized as Mill finish Aluminium sheets of 3 mm thickness. No other material offered the following advantages.

RED façade is the spectacular facial expression of the conceived thought process…constructed from customized factory made aluminium modules. 2D sketches of the whole façade received from the architect’s office were analysed and the different pieces were translated into 3D models using Sketchup software. In total, there were 90 unique geometries to be developed. Every piece was created and assembled virtually first. We then used Rhinoceros software to unfold the 3D model of each piece to obtain the blanking patterns.

The blanks had to be cut from standard Aluminium sheets available in standard size of 8 feet by 4 feet. To reduce wastage, the blank shapes were nested on the proprietary cutting software of the Turret Punch Press manufacturer. Using CNC turret punch press, mill finish aluminium sheets were cut out in requisite shapes and the pieces were then transferred to a CNC press break for folding. Leftover material was sent for recycling. Folding the pieces posed quite a challenge. Different pieces, each with a minimum of 4 sides and maximum 7 sides, between 3 and 6 folds of varying angles, were essential. The necessity of having negative folds in some pieces added to the complexity.

Since majority of the 90 different designs were repeating only 2, 3 or 4 times, the manufacturing efficiency was very low. The setting times for every fold had to be factored. In spite of using CNC press break for folding, each fold required up to 3 operations, as the spring-back of the raw material during folding operation could not be predicted accurately. Once the folding was completed and approved by quality control, the final open edge of every piece was aluminium welded by a skilled and experienced welder, the pieces were buffed and handed over to a Akzo Nobel approved powder coating unit, where they were pre-finished by chromatising and then finished with exterior grade powder coating in Ruby Red colour (RAL 3003). A 3M protective film was then applied on every powder coated piece before it was dispatched for ready for pre-assembly.

The entire façade was broken down in clusters of between 5 to 9 pieces and pre-assembly of clusters was carried out. The innumerable different planes of the faceted pieces meant a high degree of complication in attaching these pieces to the subframe. During the pre-assembly, the fabrication team was trained by Onus Design to execute the specific requirement of the complex sub-frame supports demanded by the design. A fine gap was maintained between every piece to provide for expansion due temperature rise. Research labs like Henkel were used to test the efficacy of the glue at 120 degree temp for 6 hours used to withhold the façade.

The façade, which was glued to the base structure with the recommended grade of structural glues. The team was guided through the process of cluster formation. All clusters were tagged alphabetically and ready for installation clusters were brought to site from the warehouse nearby on 2 separate flat-bed trailers alternately in a specific sequence. The installation commenced one morning, work progressed through the day and after about 21 hours, in the wee hours of the following morning it was completed.

Green façade comprises of thin retractile metal wire frame work on which creepers form a thick screening. The green veil bays from the terrace leading down to the parking along the sides of the building brackets the office spaces in a refreshing green. The veil defends the side glass façade from excessive sunlight and kindles environment inside the building creating an ‘inside-out’ façade. Interconnection with nature forms for a revitalizing, more cheerful work environment. The thick green screening substantially reduces overall running cost of air-conditioned office spaces. 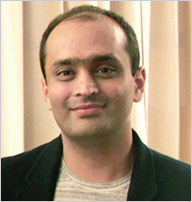 Neelesh Chopda is the Founder and Principal Architect at Onus Design, Pune. Neelesh Chopda, a graduate (B.Arch) from Pune University, worked with Ar. Bijoy Jain, Ar. Aijaz Hakim, later starting his own design firm in 2001. Over the last decades, he has excelled at the master planning and design of buildings that have left a significant marks. Neelesh’s early projects set a precedent for the criteria that would reveal the practice’s design approach: structure, space and skin. His celebrated works led to his meteoric growth leading to projects nationwide. While the company’s portfolio covers various sectors, it is proud of its well appreciated expertise and substantial experience in bringing to fruition residential projects, transport projects, retail and commercial complexes, educational facilities, industrial sector construction, largescale arts and leisure schemes and master planning.