Significance of Screen-Façade in UAE

The key function of the building envelope is to reciprocate with the surrounding environment. Achieving energy plus building, a zero net energy building or even ultra-low energy building is an achievement by itself and progressive contribution towards sustainable built up environment. Apt design of building envelope as per surrounding environment facilitates to conserve or generate energy and hence contributes positively towards overall energy conservation and sustainability of the building. When we reciprocate the interior environment with the exterior we make conscious attempt to get the best of passive solar orientation, natural ventilation, day lighting, preferential views, protection from external environment/ organisms/ noise and the likes in addition to the aesthetic preferences. Façade screening design plays a vital role in achieving all these objectives in addition to energy conservation and sustainability.

UAE is an emerging market with strong leadership where the entire nation is inspired by innovation and aspiration to reach the zenith. The climate of UAE is a desert climate with mild winters, hot and sunny summers, and very hot during times with high humidity. The rainy days are less and are usually concentrated during winter. Further, UAE being amongst the safest countries in the world has comparatively less security threats. Although an Islamic nation, UAE is proud of its diversity welcoming expatriates from over 200 nations. The built-up environment and so the façade should take into consideration these climatic factors and local factors. Screen-façade can facilitate to integrate these climatic, cultural, and aesthetic factors into the design.

There are several types of screen-façade that have been predominantly used in building architecture. Double skin façade is one such screen-façade system which basically comprises of two layers of glass façade separated by a gap where shading system is quite often installed.

The three types of double skin façade systems, i.e., buffer system, extract -air system, and the twin-face system helps to insulate against extreme temperatures, noise, and wind. As the name suggests and visible in figure-A below, in the buffer system the air is allowed to flow from the lower end of the cavity to a higher level by stack effect where the hot air rises and escapes, and usually is integrated with HVAC design. In the extract air system (Figure-B below) the HVAC is integrated to ensure that the air is extracted in the air gap and fresh air is supplied into the building continually. Unlike the buffer and extract-air systems, in a twin system, the external glass wall also has openings to allow natural ventilation into the building and the hot air is released upwards.

When the gaps between the glass façades are increased they form an atrium. On the contrary, they may be divided/ compartmentalised at every level for fire protection or noise reduction between various levels as per design requirements and considerations. Although the basic concept of double-skin façade was explored by famous architect Le Corbusier at the beginning of the 20th century which involved the cavity spaces that he called mur neutralisant (neutralising wall) having heating/ cooling air pipes. His idea of neutralising the wall was to provide a barrier by blowing warm air into the cavity in winter and hot air in summer. After several studies and implementation in buildings, it is now evident that these kind of double-skin systems are complex, involves integration with an HVAC system, and quantifying energy conservation is very intricate.

The double glazed-skin façade where the glazed façade forms the outer skin has its own shortcomings. The initial cost is very high, it uses a lot of extra spaces and involves complex design integrated with HVAC system, and hence this system is seldom used in UAE although has prospects for future research and development in regards to energy conservation and sustainability. The significance of Screen-Façade for a desert hot and sunny climate such as UAE can hardly be exaggerated. There are a number of ways façade elements can be used as passive aspects of design to mitigate impacts due to harsh climate. Sun is a major source to generate energy, provide natural light and heat during winter. However, the same sunlight in summer can cause excessive heat and glare that leads to human discomfort and hence wastage of energy consumed by HVAC systems in cooling.

Figure D shows different shading devices such as solar panels, vegetation, perforated façade, deep balcony, and light shelves, curtain/ blinds and various types of building envelope that can be utilised to generate and conserve energy. These shading devices when operated automatically like in intelligent building systems operated manually, or placed appropriately can prove to be very efficient in promoting efficient sun control, natural ventilation, daylighting, thermal/ acoustic barrier, weather-tight building envelope in addition to the visually spectacular building. The double-skin façade as mentioned above had its own shortcomings and post-recession (after 2008), the Architects/ Designers in UAE had to be more innovative to generate and conserve energy and adapt to the usage of cost-effective principles. Passive solar design strategies by reducing the usage of active mechanical systems and to enhance human comfort levels naturally became a matter of utmost concern.

To achieve this few of the innovative screen-façade strategies employed by building projects in UAE and elsewhere are briefly mentioned below:

Screen-façade on the hot southern hemisphere

Passive solar strategy accounts not just for solar control but also for solar gain. Masdar Institute in Masdar City, Abu Dhabi is the first building of its kind to be powered entirely by renewable solar energy. One example of a building-integrated solar façade is the UAE pavilion facing Al Wasl Plaza in the Dubai Expo site.

This has been designed to suggest the falcon wings in flight. Photovoltaic cells are integrated into the design of wings. Similar Building integrated photovoltaic cells and solar-powered digital façade screen are gaining popularity nowadays. Similarly, such façade-screens used in Dubai Expo 2020 site do not only function like a building envelope but also generates solar energy providing smart solutions that can be used as a model for smart and sustainable communities in the future.

Climate adaptive building shell similar to the Al Bahr Towers, Abu Dhabi is a building that attempts to adapt according to climatic conditions. This screen-façade of this tower is a solar-responsive dynamic screen that reduces the solar gain into the building. The cocoon visible from a distance is Arabic Screen similar to those of the traditional mashrabiya.

Façade greening is yet another innovative concept of cost-effective screen-façade taking the vegetation to the advantage of human comfort for people living in a built-up environment. In addition to providing thermal/ acoustic barriers plants also assist to reduce urban heat island effect, provide oxygen and filter the dust from entering buildings.

Manually or mechanically operable screen-façade gives inhabitants of a building to take full benefit of nature whether it is passive solar energy or wind/ air-circulation tailored to meet the comfort requirements of individuals in the specific building based on specific climatic conditions. For example the Apple store façade at Dubai Mall uses carbon fiber tubular element making a dense mashrabiya like patterned operable shading, each of the 18 operable wings, measuring 37.5 feet tall and 10’ wide opening the exterior terrace areas to view the majestic Dubai fountains during night.

During the day time these operable wings provide solar protection for the glazed solar façade of the Apple store. Screen-façade in the form of mashrabiya has been part of Arabic culture since the middle ages and was primarily for privacy. The function of mashrabiya and the likes have evolved since then to a modern application as sustainable and culturally appropriate material essentially for solar protection. Since UAE is located in a hot and sunny desert climate it is only natural that UAE focuses not only on sun control measures but also to utilise solar energy in an innovative manner with the screen-façade. With the advent of new computer-aided technologies, it is only natural for screen-façades in UAE also to evolve and develop innovative methods, to generate and conserve energy through the majestic manifestations of smart façade solutions. UAE, a place where minds are stimulated to strive for excellence, and the sky is never the limit. 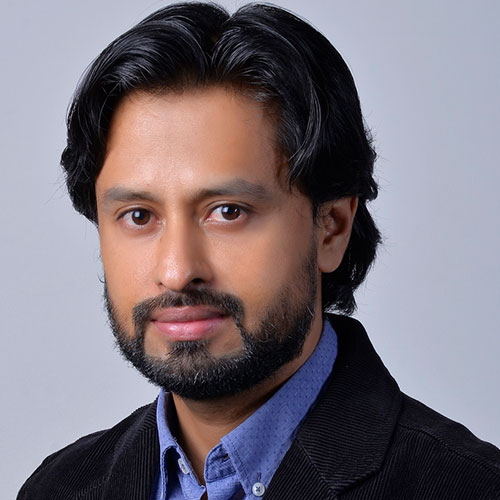 Johny Isaac is a Resident Architect/Sr. Architect with close to twenty years of experience in architectural design and execution of wide range of commercial, institutional, residential, health care and hospitality projects in UAE and India, from conceptualization stage to onsite completion. He is progressive and proactive professional always collaborating with project stakeholders to find qualitative and innovative solutions. He is a team player and has led team during design and site supervision stages of various projects.