Cellular Morphology Façade System is an algorithmically designed façade system that can be optimized for any climatic context and building typology, controlling heat, light & visibility in a space. Research in Architecture & Technology (rat[LAB]), a London-originated design technology firm, unveiled the design of ‘Cellular Morphology Façade’ which is a building skin system that can adapt to multiple climatic contexts and building conditions. The façade is currently in proposal stage and a large scale prototype of the same was exhibited at Alliance Francaise de Delhi as a part of ’20 under 35’ Exhibition in February 2015. To demonstrate the environmental potentials of the façade system, rat[LAB] has made a demonstration on an existing high-rise in New Delhi – Gopal Das Bhawan located in Connaught Place. Since the convex shaped frontal of building faces south-west, it receives a major component of its light and heat (solar gain) from this part of the façade.

In an exhibition at Galerie Romain Rolland, Alliance Francaise de Delhi, Sushant Verma, co-founder of rat[LAB] was shortlisted as one of the 20 designers from Delhi (5 from architecture / habitat category) to be a part of 20under35 Exhibition 2015 by DesignXDesign, a joint initiative of Alliance Francaise de Delhi and Studio IF. The exhibition component of DesignXDesign involved showcasing the work of Delhi based designers once a year to facilitate a reading of the emerging trends across various design based creative industries in the city.
rat[LAB] presented a large scale prototype of ‘Cellular Morphology Façade’ system that can potentially be optimized to changing solar insolation & daylight requirements of a building. The mathematically driven prototype consists of 917 unique cells made of 5,392 non-identical surfaces and 5,227 customized joints fabricated through digital prototyping techniques.
Sushant Verma insists on the need for computational technology in India and he aims to bring in the new breed of designers – computational designers – to the country. This can change the way architects and designers conceive a project and how designs are realized in the industry. rat[LAB] uses cutting-edge computational and parametric techniques and works with designers to facilitate them on projects of all scales and typology. 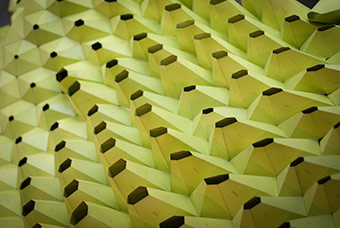 Cellular Morphology Façade (CMF System) is digitally retrofitted on South-West (S-W) façade of the tower and consists of multiple unique components of hexagon topology. The hexa-grid system is controlled through an algorithm that alters its density and attraction during the concept design stage. Six prominent functional zones are speculated as attractor points on the façade that become the first parameter of control and Solar insolation analysis on existing S-W façade becomes the second guiding parameter. With the new morphology of this retrofitted façade, local angular variations are introduced that can redistribute the sunlight in a differentiated manner on the building envelope. This can potentially change the way building is heated up and gets daylight in the interior spaces. Light, heat and visibility of / from interior space can now be optimized as per user requirements, adding a locally embedded intelligence in the new façade geometry.

A solar insolation (radiation) analysis is carried out on existing and new façade system to draw a comparison between the two. The results demonstrate a significant redistribution of solar insolation across the retrofitted S-W façade in comparison to the existing one. The system being designed in a parametric workflow can adapt to any climatic conditions and be evaluated against any number of criteria, such as environmental performance, structural performance, aesthetics and visibility. 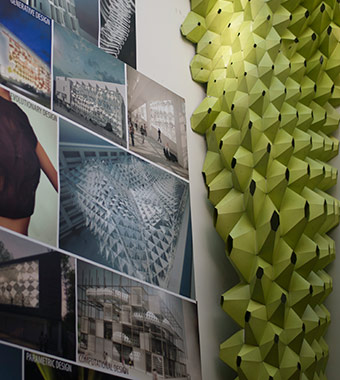 rat[LAB] – Research in Architecture & Technology, is an independent research organization and network of designers & researchers specializing in computational design or similar technology-related domains. Operated as a cloud-based organization with an international network of researchers & computational designers spread across UK, USA, Europe & Asia, and a studio in New Delhi, India, the research cell functions as a global collaborative and multidisciplinary laboratory facilitating design research that leads to novel spatial tectonics and smart built environments. The research agendas broadly focus on use of computational design & parametric design in architecture, with intersections between design & technology spread across scales and disciplines. rat[LAB] offers collaborations to architecture and design firms to develop systemic models using advanced computational techniques and carry out project-specific or agenda-specific research in all fields of design.
For more information: www.rat-lab.org