Façades have a Cultural Context

Historically, the visual aesthetics of the external façade of any structure was always as significant as the achieving of the appropriate functionality indoors. Glimpse back and you would realise the humungous thought, efforts, skills and details through exhaustive labour that the ancient churches, temples, mosques and other institutional structures displayed on the exterior. There was a representation of the cultural context. It was a matter of prestige and pride to make them iconic to evoke the ‘awe and wow’ factor amidst the viewers.

In the olden times, rulers and regimes have often used the representations on the façades as symbols of strength and power. And this is very evident when viewing our heritage of palaces, forts and parliament houses. They ejaculated a grandeur of monumental scale, an emotion for art through meticulously detailed materials, a love for voluminous indoor spaces and a sensitivity to create harmony with nature through meticulously designed gardens and parks.

All these became symbols of regality for the era they belonged to. And this penchant for classy and expressive exteriors of a building, carried through all ages. As we observe, the focus of architecture in the earlier centuries was primarily for the rulers/royalty/ elite/rich. Exclusive design and imagery were really not for the common man.

It is the ingenuity and the love for a cheerful living that led to houses for him have colourful façades with art/folklore/ graphics surface on the exteriors bringing in playful tones. All these efforts were essentially self generated by the citizens to bring in a cheer in their everyday life.

The state had very little role to play. It was only in the nineteenth century that we observe a shift in approach to architecture when all across, society went through socio political changes. Democratic rights came to the forefront and the era of kings/rulers/dictators steadily gave way to wider participation of the citizens in governance which brought his interests to the forefront. Modernism in architecture brought a metamorphosis to the physicality in architecture.

Architecture façades became more focused on so many other issues other than being iconic. Movements like the ‘Bauhaus’, ‘Deconstruction’ and such others brought in fresher perspectives to architecture. Ever since, there has been no looking back.

The last years of the twentieth century and the beginning of the twenty-first one have indeed been revolutionary in design and architecture. With the industrial era, the prefabrication thrust and engineering evolutions as a strong base, the architects got a strong impetus for heading towards an experimental approach. Never did the exterior renderings of the buildings see so much of diversity. It was as if Buckminster Fuller’s belief “You never change things fighting the existing reality.

To change something, build a new model that makes the existing model obsolete,” was pursued to the hilt. Yes, visualising architecture truly took a new mold. Post-modernism, globalisation – have all been contributory to this revolution. With prosperity on the rise, came a change in values, lifestyle and cultural preferences. Technology on a fast-track, the architects and the construction industry lapped up the advancements in further evolving ‘trendsetting’ skyscraper concepts.

In fact, in India, it is accomplished architect Hafeez Contractor who is known to be the pioneer in focusing on the façades as a major element of his architecture of high-rises. With innovatively restructured materials such as glass, steel, aluminum and more new-age ones being available, today the usage of vocabulary like panel-framed façade, steel and glass skin, double-layered exterior, etc. is in vogue. Contemporary façade design has become so specialised that for some projects, the clients prefer having specialist façade-designing architects.

Contemporary architecture, more so with the learnings from stay/work from home in this Covid-19 pandemic, has on priority, addressing concerns for the deteriorating environmental, energy-consciousness, the rapport of the inside-outside… This ideally should be a phase of designing green façade keeping ventilation procedures/acoustic insulation/ solar appropriation high on the agenda.

Well-known Bombay based architect Sanjay Puri has taken a lead here. There is a fair amount of research ongoing towards adaptive façade technologies. It becomes so important to recollect master architect Frank Lloyd Wright’s words, “Study nature, love nature, stay close to nature. It will never fail you.”

Whether a small-scaled project or then a large one, the attempt at all levels needs to be for alternatives that are climate appropriate. In the India context, eminent architects like Raj Rewal, Christopher Benninger, Manit and Sonali Rastogi, Sourabh Gupta, Brinda Somaya, Gurjit Singh Matharoo – have all evolved form and used material very contextually in their architecture. \

This becomes evident in the treatment of the façades of their structures. World over, there is a growing realisation that contextualised architecture relating to the cultural idiom would always find a sync with the end-user and the public at large. It is no doubt heartening to note that as we progressively climb the ladder with technology backed tools in design, we have simultaneous activity which is equally energized in reinterpreting contemporary vernacular.

The vernacular has always provided a strong link between us humans and the environment. The flame has been kept burning high in this zone by Indian architects like Yatin Pandya, Ankur Choksi and Amrish Arora, Sanjay Prakash and others who have innovatively utilised and brought to the forefront elements from traditional vernacular. They reincarnate the design basics of the past in the present context and reinforce Finnish architect Alvar Aalto’s thought that “Architecture belongs to culture not to civilisation”.

This period in Indian architecture is of course an exciting one with a more aware and exposed client and with the architects and designers creatively responsive to modern day demands from architecture. Aesthetics in design would always keep churning and get redefined with time and context.

And yes, the other day during a chat with a fellow colleague on this subject of architecture façades then and now, she commented, “the façades of the yesteryears were more emotive, expressive and responsive – more feminine, while now a days they are definitely rugged, brazen, often indifferent – more male like.” It left me pondering if there was any truth in her statement. 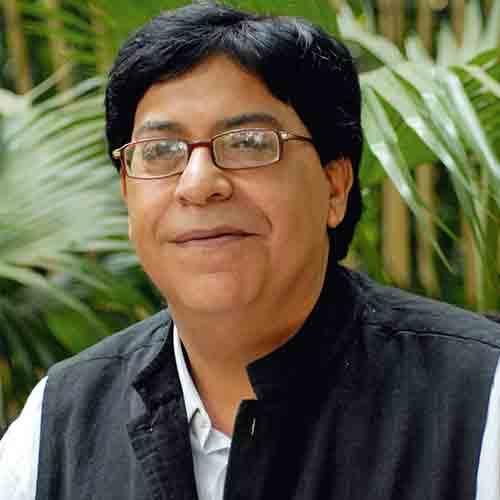 Author/architect/academician Suneet Paul is the former editor-in-chief of the magazine - Architecture+Design. Apart from his professional writing, he has also authored a couple of books- short stories. Exploring culture and art has always been close to him