Home > Facade > When the built harmonizes with the landscape, it’s called SYMBIOSIS

When the built harmonizes with the landscape, it’s called SYMBIOSIS

An architectural practice with focus on creating spaces that exist in equilibrium with their surroundings, at Studio Symbiosis elements of program, site, context, landscape and climate are studied and interfaced, thereby resulting in the amalgamation of these considerations in one coherent  design.Bringing out their aesthetic best, Ar. Amit Gupta and Ar. Britta Knobel Gupta, along with their collaborative partner Ar. Vandana Sehgal  designed this upcoming hotel in Ahmedabad which is yet to be titled. The uniqueness of the project comes from its concept where the built harmonizes seamlessly with the surrounding landscape. This is an inherent part of the façade design  process whereby a feedback loop is established that constantly updates the formal language of the project thereby embedding environmental sustainability in the form itself.

Seamless waves flowing on the landscape and continuing onto the façade were the focal point of the design proposal for this full service five star property. To be designed as an iconic building the proposal looked at interweaving the concept of waves and fold lines as movement trajectories to be perceived along with programmatic requirements.

The idea of creating a design with soft subtle touches and imbibing a sense of elegance was instilled in the proposal from the creation of the form itself.

A research based collaborative approach was deployed. Real life phenomena such as sun path diagrams, wind patterns, topographical levels, etc.were studied both digitally and physically to instigate a design process resulting in conceptualizing of the overall form.

The building comprises of three waves which emerge effortlessly from the landscape creating a sense of harmonic relationship with the ground. The profile of the building has been designed with keen emphasis given both to the smooth transition from the horizontal landscape to the vertical building and to the standardization and replication of the façade components.

The façade is designed as an intricate part of the building. The entire façade system feels the reverberation of the slightest of change in the external skin due to flux in the internal spaces. Facade blends from larger areas in the ground to standardized rooms in the upper floors, which in itself is unique typology for the hotels. 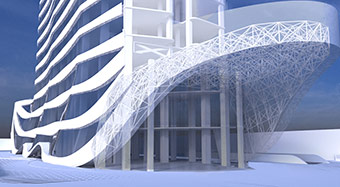 Landscape and façade are designed as an extension of each other in the project, whereby a fuzzy boundary condition is created. The waves of the façade break out into the landscape creating nestled programmatic zones. The landscape acts as a vantage point to immerse the visitor in the architecture of the building and to enjoy the dramatic façade flaring out from it.

The waves in the façade design follow two key principles –

The form itself is double-curved at some places and single-curved at others. This complexity of the form was looked at as a design parameter and greatly influenced the façade design. The vertical curvature of the building is broken down by the aluminum bands at each floor. This means that the glass can be faceted vertically and still remain conspicuous without affecting the design concept. The aluminum bands cover the façade line at the slab level at the same time creating a visual illusion of the building still being curved.

The initial concept was to have the waves built in concrete and then cladding over it. The system to be used was a window wall system. But then the façade consultant on board explained the disadvantage of the same:

But every solution comes with a technical challenge. Here it was the non-uniformity of the panel size because of the geometry of the building. The building had more than 60 different panel sizes which was a major hindrance in going for unitized panels. Simulations were carried out the variety of panel sizes was reduced to 4 with 95 % being of same size. The major advantage of going with unitized was that a primary continuous skin which is air and water tight could be realized.

But now the second challenge was to put the elevation feature over the façade. It had to be light weight since it was directly loaded on the unitized primary façade below. Hence the light-weight aluminium panels were used.

Another problem with the project is the geometry of lower floors. To tackle that all the drawings were made in 3D and production drawings are derived from the same. Hence, site measurement is ruled out thus limiting the scope of human error. The façade will be produced and installed at site which will accommodate the tolerances of the civil structure.

Amit Gupta has been involved in projects of various scales and sectors ranging from hospitality, commercial, residential, mixed use and master plans. Graduated from Architectural Association school of Architecture, London, he has been looking at creating robust and efficient forms of designs with sustainability embedded in them. After graduating from Architectural Association school of Architecture, London, Britta Knobel Gupta worked in London as lead architect for Zaha Hadid Architects for a period of five years involved in a number of key international projects such as Abu Dhabi Performing Arts Centre, Broad Art Museum in Michigan, Dubai Opera House, etc. As co-founder of Studio Symbiosis Architects, she is involved in projects of various scales.