Home > Facade > HAIR ON THE FACE

HAIR ON THE FACE

Façades and the Built Environment

Long, long ago as I walked into the makeup room of a theatre and introduced to an actress and even as I admired her beautiful face and hardly listened to the words of greetings exchanged, the makeup artist grimaced his face and with a deft touch applied a black spot on her cheek, and all heaven broke loose as she magically transformed to an ethereal beauty and my eyes could just not take off, my tongue tied , my eyes frozen, I took a deep breath and with a sense of dizziness strolled away- the memory never to be forgotten.
These and similar memories often awaken me as I sit along with my 3D designer and try to manifest a plan and section into the third dimension. What makes beauty beautiful and aesthetically appealing? These are the Challenges that infuse that touch of the spirit to awaken the senses beyond the everyday experiences to heavenly delights. 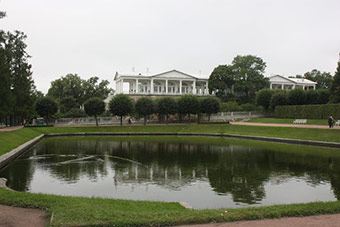 One day, a decade ago as I walked the streets of St. Petersburg together with a small group of eminent architects from all over the world we suddenly froze, all of us on our own! There in front of us a simple unassuming timeless façade smiled at us, amidst a chaos of baroque and modern edifices. The Architect was Cameron (who incidentally with a changed first name is the hero of Howard Roark in the Fountainhead!) He is also the architect of the palace which has no baroque ornamentation. It is beautiful in its façade both interior and exterior and in the spaces that it integrates.
Similarly again driving down from the snowy peaks of Austria with a few architects in a car we suddenly hailed the driver and there before was an envelope – a cover of a building fenestrated with moving jallis that played with the Sun and the time of day. And as the envelope opened it revealed the inner body core with fascinating features. Like a love letter hidden in a Romantic envelope.
Today the imagery overrides the function of a space. Functions are as changeable as the mood of the market and business that dominate the urban scenario. The façades any way are morphed to suit the psychological demands and pursuits of the customer. Greed rules!
But, there are rare exemptions that delight the aesthetic senses over time and in space. Great architecture is not an everyday exploration. And good architectural façades are an experience. What normally one confronts and get excited about are historic juggleries and structural circuses that get away in their form. These are exhibitions, and rightly so. Most of the population walks the streets for entertainment.

Entertainment is the buzz word. If not within at least without! The common person no longer lingers on the road to admire, they want excitement. Life is one long dreary office work, Everyday a mundane repetition of yesterday to be followed by tomorrow. A stimulus is demanded. Bars, restaurants, theatres and malls try to fill this emptiness. But they must first capture attention. A lewdly dressed person or a naked fakir can draw attention but performance is a must. Buildings must perform. Façades and their design are the instruments to provoke and provide this emotional sensuous reaction.
Today is not Yesterday, Neither Tomorrow Today. But Technology literally overtakes time in all the senses of human sensitivity. Art lingers sometimes buries itself or in defiance attempts to dominate with historical and cultural references itself and makes a mockery of the self. THE Façade LAUGHS!