A façade is a term used to define the exterior face of the building, usually the decorative one, that faces the street or the main entrance, and which is supposed to protect the interior spaces from the exterior elements such as dust, temperature, rain, wind, etc. However, with the newer buildings increasing in height and assuming a form of a tall tower, all sides of the buildings assume equal importance.

Façade is probably one of the most important, and yet, understated aspects of building construction. Most people associate façade with aesthetics and an unnecessary cost to the project, which could be easily curtailed – and usually it does so. However, a correctly designed façade is an element that would not only increase the value of the building but also could pay for itself over a period of time. More than a century ago, buildings were designed with a solid stone façade. The idea behind this perennial cladding material was its higher strength, longevity, ease of maintenance and its durability; not to mention the ability of the natural stone to facilitate decorative carving. Even today, façades constructed with natural stones would probably outlive the life of the building without the need for painting and much maintenance.

The fundamental philosophy behind the façade selection has not changed much in all these years. However, the prohibitive cost of these natural materials has indeed forced people to start using cheaper man-made alternatives. There came an era where the cost of the building had to be reduced substantially to meet the financial feasibility of projects, and the first casualty was the façade. Lime plastered exterior, trowelled over brick walls became a norm, which later changed to cement plaster due to easy of availability.

With the introduction of tighter development control rules and regulations, the building elevation started getting dictated more by its regulation than the artistic value of their front face; and the façade became just another face to enclose the interior. Today, times have changed once again. End users of building are becoming more demanding and are choosing better looking buildings over others. Developers and designers are therefore forced to spend money, once again, on building façades in order to attract new customers. Development in modern technology has enabled production of superior products such as high performance glass and glazing, Aluminum Composite Panels (ACP) and High Density Fiber Boards (HDF).

Natural manufactured materials such as steel, bronze and zinc are getting introduced into building façade these days. Ceramic tiles are being used in façade due to their high dimensional tolerances and a large variety of colours and textures. Digital printing technology has facilitated screen printing on any material and Computer Numeric Controlled (CNC) machines are facilitating accurately machined perforated façades too. Therefore, options in façade design are limited only to the limit of thought.

While designers are designing the façades to be aesthetically attractive, and the ones that will protect the interiors from the exterior elements, very few people realise that an intelligently designed façade would probably pay for itself in a short period of time. While most designers are using their creativity to design the façade keeping aesthetics in mind, one of the most critical aspects of the façade, i.e. to reduce the capital and operative costs of the building, are often overlooked.

Glass coated with high performance coatings and double glazed units with air/intent gas barriers effectively reduce the rise of temperature in the interiors of the building due to the solar radiation, thereby not only keeping the interior cooler but also reducing the cost and operations of air-conditioning systems. In large installations, the savings itself achieved with this reduction could easily pay for the cost of the façade. While, it is not always possible for developers to spend large money on the building façade, a better understanding of science and its application could allow designers to design creative sunshades that would function almost as well as high performance coated glass façades.

The project was won by us through a design competition for a 750-seater auditorium at one of India’s leading and fastest growing educational institutes. The project is located in somewhat of a barren territory along the upcoming Super Corridor region of Indore. The project site has excellent foreground and background landscape and has a direct visual from the super corridor. The local architecture in the upcoming area appears to be simplistic to suit functional design and to minimise project cost. Our project in hand is a 750-seater auditorium for the Symbiosis University of Applied Sciences (SUAS), whose mandate was to create a distinct and interesting design in the campus that would identify it as a landmark structure in the country.

Our approach to the façade design was as follows. An auditorium has inward spaces which do not usually need any external light. Therefore, while designing this building, rather than create a simplistic black box as traditionally seen in most auditoriums, we created a series of curves emulating the petals of a locally available flower “Palash”, where the roof structure extended to the floor and where the spaces between the roof formed the petals of this flower.

Garware Club House is a member’s only private club which has been in existence since 1974. This club house is located on a 12-acre prime property in South Mumbai, three quarters of which is occupied by the world renowned Wankhede Stadium.

In 2006, the club took up an initiative of demolishing the old club structure and constructing a modern club house in its place, measuring almost 200,000 sq ft. The site is situated in one of the largest art deco regions in the country i.e. the Marine Drive precinct of Mumbai and while designing the façade, it was only appropriate that a hint of the art deco language be present somewhere if not in entirety. Since the building was located in the interiors of Marine drive and not in the direct visual of the art deco region, we designed the façade with a twist – modernism coupled with the bold and repetitive strokes of art deco language.

The façade of the building is clad in blend of aluminium composite panels, glass and uPVC louvers which are intentionally designed to make the building look lighter and sleeker due to limited available foreground. The bold concentric rings fabricated in ACP are aesthetically set within uPVC louvered background gives it a hint of the art deco language. These louvers creatively hide the plumbing and ventilation services from the front of the building. An ornamental staircase winding within a glass enclosure on the lower corner of the main entrance beautifully balances the heavy metal mass above and provides the necessary ventilation for the toilet shafts.

This contemporary designed structure places beautifully as a foreground to the modern mass of Wankhede Stadium, which was recently renovated by us as part of the complex. The roof canopy not only hides the structural support for the guided rail system for façade maintenance but also acts as a wind barrier for the roof top tennis court. A large glass canopy covering the main entrance of the building is designed to functionally segregate the club members from their banquet users. 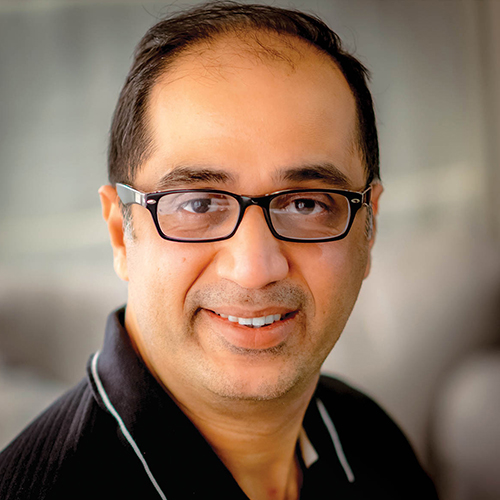 Ar. Amol Prabhu joined Shashi Prabhu & Associates (SPA) as one of the partners of the firm in 2005. He brings over 22 years of experience in managing projects using structured and scientific approach especially essential for managing mission critical & time-sensitive projects. At Shashi Prabhu & Associates, Amol has also been actively involved in reorganising the company structure and setting up standardisation platforms in design, management and financials to expand the firm into a professional entity. He is capable of providing broad spectrum of services right from architecture, interior design, engineering and project management consulting services.