Home > Facade > Façades of the Future – Perpetuity to Prosperity

Façades of the Future – Perpetuity to Prosperity

Buildings in developed countries consume more than 40 per cent of the country’s energy. Since building in India are less energy intensive, it is estimated that they consume approximately 30 per cent of the nation’s energy. Alarming scenario is that in the next thirty years, we will have to add 3 more India to provide “Housing for All”, and to cater for the needs of the fast growing population. This will lead to serious shortfall in meeting energy demands for the future, unless corrective measures are immediately taken. The good news is that by providing energy efficient green construction, and by harnessing our abundant solar energy, our proposed development need not be threatened.

We could meet all future demands with only manageable enhancement of power generation, that too by renewable means. Fenestration’s role in energy efficient buildings takes centre-stage.

Globally, building construction and building operation have come under spotlight for their very strong linkages with energy use and climate impact. It is estimated that with the rapid urbanization in developing countries around the world, cities in future will be consuming more than 70 per cent of world energy and will account for 70 per cent of CO2 emissions globally. Within the climate and energy debate, the urban consumption pattern in

building units in cities has thus become the focal point for mitigation. And fenestration plays a critical role in energy conservation by buildings.

India has made comprehensive commitment to combat climate change at the just-concluded COP21 in Paris. The deal aims at reducing the global warming which has already started melting ice sheets at the poles, resulting into rise of sea levels, threatening the lives of animals and plants, which have been living in peace for centuries on our Mother Earth. The Conclave envisaged to hold the increase in the global average temperature to well below 2°C above the pre-industrial levels, while making all efforts to limit the temperature increase to 1.5°C, to minimize the impact of the impending doom.

All cosmic creation is made up of five basic elements, called PANCH BHOOTAS. These are sensed by various organs. In the evolution of life, man ranks as the most evolved of all life-forms, from plants to birds and animals. Buildings are the foundations of a civil society. At their best, they nurture and define a community’s identity by instilling a greater sense of pride; they foster frequent and meaningful contact between citizens; they provide comfort in their spaces and they encourage an increasingly diverse population to use them.

The façade of a building is the first experience of the building that tells us that structure has something special to offer. Façade is the representation of the architect’s creative vision and desire to impress with something unique and out of the ordinary. As the interface between interior space and exterior environment, building’s skin plays a crucial role in heat and light exchange. Its performance in that role affects occupant comfort and productivity, energy use and running costs, which are the cornerstones of Green Buildings. 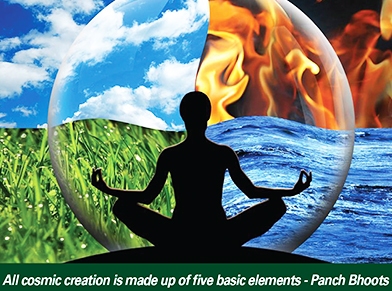 Green Buildings celebrate the optimization of Panch-Bhootas, so that occupant and visitors to the building make a distinct and positive contribution in preserving all life forms on our beautiful Mother Earth. Façades make the single largest contribution in this optimization of the Panch-Bhootas. We present herewith how Façades of the Future will cater to each of these.

Hydroponics is a triumphant means of growing vast quantities of food in Water while conserving energy in a manner that can utilize much of the flotsam and jetsam of the Age of Oil..

The idea that fruits and vegetables can grow with water, light and nutrients (without soil)

is the basis of hydroponic: one of the innovative system of making the building self-sustaining. There have been other numerous advantages of this system as well. A reduction is seen in street level concentrations, up to 40 per cent for NO2 and upto 60 per cent for particulate matter. These also potentially contribute to an increase in biodiversity in urban areas by providing a habitat for insects and birds. The most important aspect is their “Rejuvenating Effect” on the living creatures around, as they contribute in softening of the urban landscape; allowing buildings to seem more ‘natural’ and pleasing to the occupants and visitors.

Building integrated photovoltaics capture the solar radiation and turn it into energy. A modest level of energy generation (upto 12 per cent efficiency) is achieved through Photovoltaic Glass Unit (PGU). The new PGU’s provide upto 70 per cent transparency to human eye, allowing their use as part of the fenestration of the building. Electricity produced by one sq m area of PGU varies between 40-60 kWh per annum.

PV application in this building has combined the sun with structure, which has led to opportunities to convert windows, exteriors and other integrated applications into solar panels in a commercially viable manner. This thin film module system thus demonstrates the utilisation of solar energy as a mainstream source of energy.

Algae powered building at the International Building Exhibition in Hamburg, demonstrates world’s first algae-based bioreactor façade. The façade is clad in 200 sq m of integrated photo-bio-reactors in which micro-algae is cultivated. The façade system, known as solar leaf, generates algae biomass as a renewable source of energy. This smart energy concept leads natural forces to work together in a loop. The façade of living algae biomass produces heat, which combines with geothermal and solar thermal energy, to create an environmentally-friendly powerhouse.

The bioreactors not only produce biomass that can subsequently be harvested, but they also capture solar thermal heat; both energy sources are used to power the building.

The algae is produced using the power of the sun, carbon dioxide (CO2), and liquid nutrients, which culminate in energy sources including methane gas that can be used to both power and directly heat the building.

At a yield of 15g dry weight per square meter per day for the conversion of biomass into bio gas, a net energy gain of approximately 4,500 kWh per year can be achieved, which compares favourably with the requirement of 4,000 kWh per year for a family of four members. 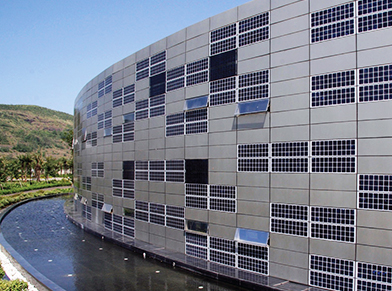 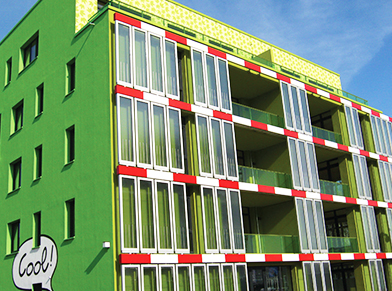 The façade accounts for four-fifth of the building surface exposed to the outside environment. When water falls on a building, the collection of water from various façades of a building will be four times more than just the roof. A façade-rain water harvesting system utilises façade cladding instead of roof collection. The system uses the structural ‘transoms’ or horizontal glazing members to direct rainwater falling on the glazing panels into the vertical mullions, and from there downwards into a basement collection system. Embodiments allow rainwater to be collected before ground contamination occurs, making its filtration and reuse within the building easier. Hence, urban buildings can seriously benefit from rainwater harvesting by façade and reduce their water consumption in a way that only buildings with larger roof areas were able to before.

In many African countries, clean water is still a luxury. The 10-acre Water bank Campus comprises of seven water-harvesting buildings including the soccer (or “futsal”) stadium capable of seating up to 1500 people. These help to save, educate and unite communities with availability of fresh water.

Just like the surface of a leaf, the ‘skin’ of future buildings will react to external stimuli-opening, closing and breathing throughout the day, through a system of ‘cellular’ openings that will allow light, air and water into the enclosed spaces.

Al Bahr, United Arab Emirates, is sheathed in a thin skin of fashionable glass modules. Each module on its façade responds to the level of sunlight by opening and closing.

There is a specially designed secondary sun screen that deflects some of the glare without permanently blocking the views. A series of faceted fiberglass rosettes open and close in response to the temperature of the façade.

Growing vegetation on the façade (vertical landscaping) can potentially create a positive microclimate around the built form. A microclimate is a local atmospheric zone where the climate differs from the surrounding area. Studies demonstrate that in composite climates like New Delhi, a reduction of approx. 5˚C in outdoors (compared to the surrounding ambient) can be achieved by using green vegetation around buildings.

Quai Branly Museum in Paris, showcases that living in a city doesn’t have to mean abandoning the natural world. This building is an example for how to solve one of the biggest urban planning problem of modern times- finding space for the greenery needed to maintain indoor air quality and emotional health of occupants. 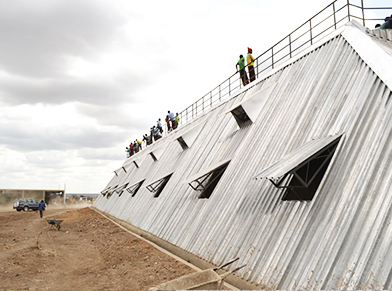 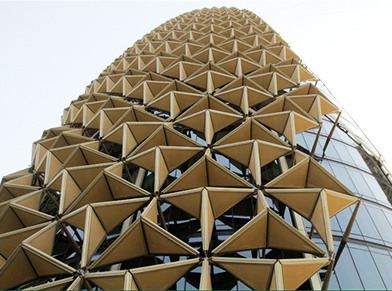 Most developing countries have high air pollution levels and as a result the indoor environment can become even more polluted by supplying fresh air. Drawing ventilation air through a green façade, or a green house, offers a potential to prevent toxins, VOC’s and microbial infections from entering the air-conditioned buildings.

Paharpur Business Centre, New Delhi, has more than 800 plants spread throughout its six floors, greening each room and hallway. Their job: remove soot and other chemicals from the often charcoal-coloured outdoor air. New Delhi’s smog is nearly three times worse than Beijing’s, as the World Health Organization reports, based on measurements of fine particulates, or PM 2.5.

“We have an air treatment plant,” Kamal Meattle, the CEO, says of his innovative combination of scrubbers, filters, and greenery. The result, he adds, is fewer employee sick days, greater productivity, and air as clean as that in Davos, Switzerland.

Living beings are complex products of their environment. They are made of a number of different natural elements, many of which are essential for survival. Buildings protect them and provide them with a sense of identity. Because of this, they can be considered as the true illustrators of the fundamental elements of life. 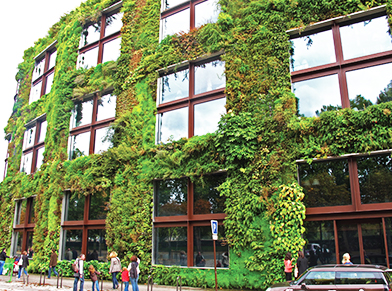 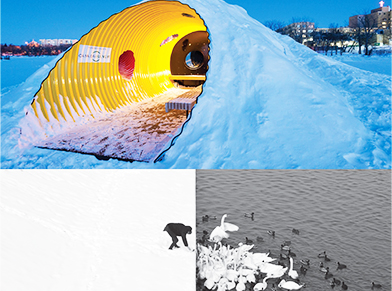