Glazing into the Future – How Media Façades Will Change Our Cityscapes

Our city scapes and how we work, live and relax within both the buildings and the surrounding urban spaces are set to change beyond all recognition in the next 20 years. One of the key drivers of this change will be the continuing digital revolution and the evolution of what many are calling the ‘smart city’. A multiplicity of powerful and connected systems will be generating data on the health, status and well-being of not only our smart cities and all that which physically comprise e.g., transport, lighting, footfall, energy consumption etc., but also of us – their citizens. However, the generation of information is only part of the smart city story. The gathering of data is not beneficial in its own right; it will only become meaningful and have commercial value if it, the data or information is processed and presented in a relevant and timely manner. If it is done properly then the businesses, local governing bodies and citizens should be able to respond to the data in such a way that will add value and improve their own lives. Inevitably much of this data will be available through mobile devices and these will doubtlessly be the mainstay of communicating within the smart, Media Façades.

Whilst it may be possible to send a message to numerous individual devices using an alternative means of communication with large numbers on a ‘live’ basis may be with large Media Façades. These additions to public and commercial buildings will provide a powerful new way of communicating relevant and pertinent information. Manufactured from an architectural grade glass that is durable and resilient, but also fully transparent with full, rich media capabilities, these facades have the potential to change the cityscape as we know it. Media facades are not only the channels for 21st century communication, but they will also provide opportunities for entertainment, new interactive leisure and will be a key influence on how both new and existing urban spaces which are used, enjoyed and developed in the city of the future.

THE ROLE OF GLASS IN THE SMART CITY

When you think of a media façades, the first image that comes to mind is probably a Ridley Scott’s iconic depiction of the Coca Cola advert on the side of a building in “Blade Runner”. Whilst advertising is doubtlessly going to be a feature of these media façades, it will not be the only or most important feature, and any advertising that is done will be far more experiential and creative than just displaying a logo and product image, which is what we are familiar with today. These new and much larger façades will facilitate far more creativity and we should be prepared to expect the unexpected. Even at this early stage in the uptake of this technology architects, designers, app developers and organisations are coming together and developing ideas that, if they come to fruition then it will truly transform the digital cityscape. They include:

This can work on several levels. For Chinese New Year 2016, an app for mobile devices was created that allowed people to ‘throw’ digital fireworks onto the side of a building. However, there are other things that can be done with this technology; we are able to react to sound, movement, weather and amend the displayed content accordingly e.g., transport information, weather warnings and emergency services advice, which could be life-saving in the case of a major incident. With ubiquitous mobile app penetration, it is not unfeasible to foresee a time when the media façade or screen could even react to the presence of individuals enabling them to receive a personalised message.

Architectural gaming, with the game taking place on the side of a building could breathe new life into run down or deserted areas. Imagine a square or plaza that falls dead and becomes a ‘no-go zone’ after office hours. Then install a glass façade upon which teams of players could interact and play games. This would drive regeneration as food and retail outlets would pop up to support the new game playing visitors to the neighbourhood, creating new energy and a new hub, for a different audience within a city.

Whilst these new glass façades obviously lend themselves to the latest, classical forms of advertising where the quality of the highest end products can be reflected and replicated on a huge screen there is scope for far more dynamic forms of advertising. Imagine the launch of a new car where it could be seen to be ‘driving’ around a city, using these media façades not only on buildings, but may be smaller, pop up installations that have been temporarily installed for the duration of the campaign. Target audiences could be encouraged to “take a photo of the car at a particular site and could win a prize”.

A sophisticated media façade allows an architect to create an aesthetically beautiful design using both the physical form and the additional medium of light. The building may change colour throughout the day, or by playing with the perspectives, they would be able to create stunning visual illusions and merge the structure seamlessly into its environment. With clever use an outdated, ‘ugly’ building could be rendered far more pleasing and acceptable; a fix for failing architecture. It also gives the building the power to share experiences externally, which were previously only been accessible to those inside the building; e.g., whilst an original work of art may be being created in a museum or studio, its actual creation could be shared on the exterior for all those outside to witness. Not only does this generate wonder and engagement with a wider audience, but it gives the building a new energy.

THE TECHNOLOGY BEHIND THE CREATIVITY

G-Glass is a laminated glass product. It is composed of a 4mm base glass coated in the fluorine tin oxide (FTO) which is both conductive and transparent. Each panel has an FTO surface layer into which is etched the necessary circuity, using one of the world’s largest etching machines. The LEDs are then attached in their precise positions. The cover glass is typically a heat soaked, tempered 6mm glass, allowing the finished unit to be rated as a safety glass. A resin is then poured between the plates and hardened using UV light. The finished assembly is connected to drivers hidden in an aluminium frame by flexible printed circuit boards (FPCBs) which are connected to DVI controllers and an external power source. The controllers determine the orientation of the panels and how the video files will be played across the glass.

The media display’s resolution is determined by the:

Although still to be installed externally for the first time in the UK, the glass has already been used in Asia for:

Architectural: Large scale Media Façades
Interiors: Interior G-WALL products for board room walls
Events: G-Tainer, a modular G-Glass product has the size of a shipping container, suitable for both indoor and outdoor events.

Whilst at first glance glass would not be thought of as the material of the future, the capability and functionality of the façades really could transform buildings into grand canvasses and the smart cities of the future will no longer be restricted to our imaginations. 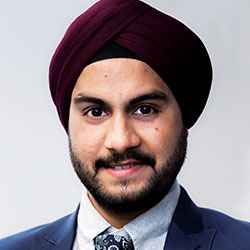 Sanmukh Bawa joined G-Smatt Europe as Director of Engineering in 2017 with his extensive technical background in structural glass. He has been involved in the exercise to place G-Smatt media glass on the market primarily in Europe and USA with appropriate technical compliances. Prior to this, he worked with Eckersley O’Callaghan in London as a structural glass and façade engineer. Sanmukh Bawa had been primarily responsible for the facade design and structural design of complex glass structures, including the Apple HQ in Cupertino and Apple flagship retails stores worldwide. He is currently a member of the prestigious Institute of Engineering and Technology in London since 2015 along with other global professional institutions.